Francois van Coke – songwriter, lead vocalist and founding member of SA punk rock bands Van Coke Kartel and Fokofpolisiekar – has lived his life fast, loud, and mostly on the road; which left him out of shape and unhealthy. Here’s how he turned his life around, and went from fat to fit.

Francois van Coke is playing to the crowd. There’s no guitar, microphone or amp, just a loaded barbell – and a few people listening to his gravelly, award-winning baritone. But then the mood changes. The people disperse, and it’s just Van Coke and the barbell, his easy-going smile replaced by a focused glare. He grips the bar and 3, 2, 1, lifts with the same confidence and concentration he shows each time he picks up his guitar. He’s here to sweat, not sing; but this is his stage, and he’s here to perform.

As a child, Van Coke was very active; he played rugby, reaching his peak in Standard 5 when he played Craven Week. He continued to play through high school, and even after school, in club rugby. But eventually, his rugby – and with it, his exercise routine – was benched. It’s a tale as old as time: a man either doesn’t have time, or loses interest – or has two passions, pitted against each other. For Van Coke, it was the latter; and there was simply no competition. 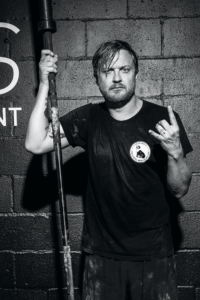 “I think the passion for music took over when I was about 16. I really fell in love with grunge music when Nirvana and Pearl Jam and those bands came out. It made me want to pick up a guitar, and I think that kind of killed my passion for sport a little bit.”

Van Coke started touring when he was 23. On the road with his best mates, it was one continuous party; he was drinking a lot, and eating whatever he could get his hands on. He was young and enjoying a lifestyle he had only dreamed about while strumming away as a 16-year-old. But it was also the early years, and the band didn’t make a lot of money; which meant Van Coke followed the “whatever I could find” diet.

“There was no diet, there was no fitness plan, there was no health whatsoever. I was more on a self-destructive path. It was part of expressing our freedom,” he says. “I think I fell in love with that rebellion of playing rock music; and I really fell in love with the lifestyle, too. I really went for the ‘sex, drugs and rock ‘n roll’ thing when I was younger. I partied a lot and I didn’t do any exercise; I became a fat slob.

Related: 16 Tricks To Burn Fat While Sitting Down

And catching up he is. He doesn’t know how much he’s lost because he’s never weighed himself; he doesn’t know the figures and facts. But it’s not about numbers and bragging rights for Van Coke. For him, it’s about being a better man who makes smarter decisions, respects his body more, and challenges himself to lead a healthier lifestyle. 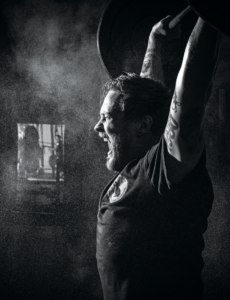 Van Coke was at his most unfit and unhealthy between 2010 and 2012, after more than 10 years of living the rock star lifestyle had finally caught up with him. But there was no rock-bottom moment, or crushing realisation when looking in the mirror one morning.

“I got married in 2012, and my wife started spinning; so in 2013, I started spinning with her. That was the first bit of exercise I’d done for 13 years, and it was a gradual process. So I started doing that, and I started running a bit, and started training in a gym here and there… and it was on and off, for a while.”

Related: Craving Chips? This Is How To Make Your Own Vegetable Crisps And Satisfy Your Junk Food Cravings

Van Coke is proof that not all transformations happen in 3, 6 or 12 months; many take years. He’s been on his own journey for five years and counting, slowly chipping away at the years of fat that had come from partying, eating and being on the road – which finally led him to Huba Fitness in Cape Town.

“I think I’m probably the fittest I’ve been in the whole process, now. I’m running a lot, and I’m working out at Huba. But I’m obviously still on a mission. It’s not like I’m ‘there’ at all. I’m on a mission to get fit.”

Set Your Alarm, But Adapt

Van Coke’s mission started with auditing his lifestyle; his habits, his diets, his exercise and his sleeping patterns.

“I think, especially for people who do jobs in entertainment, it’s hard for them to think that they have to wake up earlier, because they can wake up at 12 if they want to,” says Van Coke. “You start performing at 11 or 12, and then you get home at 2. To convince yourself in the morning that you have to go and run or do something, you have to mindfuck yourself.”

For Van Coke it started with the decision to get up earlier, and fight the voice that said he should snooze his alarm and sleep in instead. “I think I started making choices; getting up in the morning, and working out. That was my first mission – the exercising early in the morning. I did that for a long time.”

Related: How To Get Out Of Bed For Your Morning Workout

But a year and a half ago, Van Coke got an alarm clock that couldn’t be snoozed: a daughter. Now his mornings are filled with dad duty instead of dumbbell duty.

“I don’t work out early in the morning anymore, because it’s kind of impossible. So I also had to adapt to that. It changes continuously.”

That’s an area where Van Coke excels; when there’s a change or a challenge, he adapts where most guys would freeze up or give up. One day he’s home, the next he’s spending the whole day in the studio, and the day after he might be on the road, or up till the early hours performing.

Make Your Workout Work For You 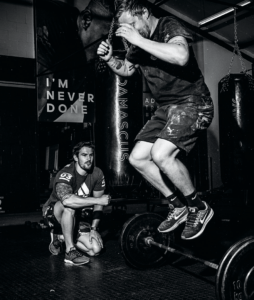 It’s all about keeping things interesting for Van Coke, a musician, used to having new and different experiences almost every day; and his workouts are no different. Now he trains at Huba Fitness, and it’s the perfect fit for him.

“It’s a 45-minute workout and it changes every time, which is quite exciting. You never do the same thing. It’s a mixture between cardio and strength and stuff like that. And I run, and I play squash, and I swim with my daughter. I’m a terrible squash player, but I like it. If I could play sports all the time and that was my exercise, I would do that.”

Finding something he enjoys doing that works for his goals and his busy schedule is his key to staying fit, but he’s learned that lesson along the way. It’s not all about what you’re working out; it’s also about who you’re working out with.

Van Coke once had a trainer who made him lift weights that were too heavy, so he bulked up instead of losing weight and getting fit like he wanted. But he knows what the problem was, now. “It’s training with someone who doesn’t know what your goals are, or what you’re on a mission for.”

Give Yourself A Break

Van Coke realised that if he was on a mission, he couldn’t just focus on one area and neglect the others, because he’d never see results. But he also knows that some vices are worse than others; and as long as he’s tackled the bad ones, he’s okay.

nes, he’s okay. “To say the least, I turned the taps down quite hard, if I can say that diplomatically, on all fronts. But my biggest vice still today is eating chocolate. I feel way better though. I turned the taps down long ago, a couple of years ago. I think it was part of the journey, and everything obviously changed.”

“Eating is still a pretty dark place for me. I eat kind of well when I’m at home; but on the road,” he snaps his fingers, “it changes like that.” When Van Coke’s on the road, he has to give himself a bit of breathing space, and he’s learnt to accept that. He does what he can when he can, and focuses on making better choices each day. “I’m doing my best, I guess.”

For Van Coke, there’s no perfect diet or foolproof workout plan. It all comes down to him, and to silencing the voices that validate his excuses. But it’s not all about the stats, the weight lost, the crash diets, the twice-a-day-every-day workouts. Sometimes it’s about the small changes – that eventually lead to big results.

Find out more about Francois and his music, shows and merchandise: francoisvancoke.co.za, or phone 021 802 2657.