See How This Guy Cut Down 7kgs In Only 7 Weeks

Michael Markram is a boxer who kicks ass in the ring. But he’s also got losing weight down to a science. During a recent bootcamp in Canada, the prizefighter burnt through 7kg of fat in just seven weeks, managing to pack on muscle at the same time. How did he do it? It was partly down to training three times a day, striking a healthy balance between strength and cardio, and mostly down to eating clean. Very clean.

“Before every big tournament, where I need to make a certain weight limit, I watch my diet like a hawk. I’m counting every calorie I eat and making sure I never, ever put any junk in my body,” he says. It’s about having the fuel to take on three hardcore training sessions every day, with enough in reserve to jumpstart his recovery.

Markram admits he’s always been a fitness freak. In high school he was drawn to the sports field, and later the boxing gym. He was attracted to the latter because he had always considered himself a lone wolf – a product of being an only child – and because he wasn’t getting the physical results he wanted from other sports. Now, the Men’s under-91kg SA champion is fighting in Canada to prove himself on the international scene.

He starts every morning with a 6km jog or a series of sprints, followed up with conditioning and explosive workouts in the gym. During his final session, he’ll go 12 rounds at a heavy bag or jump between six rounds of sparring and another six of squaring off against hand pads. His cooldown: 15 minutes of straight ab work, followed by three rounds with speed ball. He always tries to weave in his two power moves, deadlifts and pull-ups, too.

Related: 3 Boxing Moves That Can Make You Stronger & Faster

Markram’s days are gruelling, but the fighter relishes the challenge. “I never think about giving up. It’s just not in my nature,” he says. “Sure, sometimes I’m frustrated or unhappy, but I just have to remind myself of the end result and that keeps me motivated. As with anything in life, it’s about meeting the man in the mirror and seeing a better reflection every day.

“To me the thought of achieving the body I want is enough motivation on its own. The fact that it’s attainable, that I will have what I want if I just carry on doing what I’m doing – that motivates me too.”

The real challenge: his diet. When he’s on calorie lockdown, Markram says he can be short-tempered, or start to feel impatient with stuff that would otherwise be trivial. Finding that balance between his career and his social life takes work, and he has to actively focus on remaining as calm as possible.

Related: Get Ripped In A Minute With This Brutal Boxing Workout 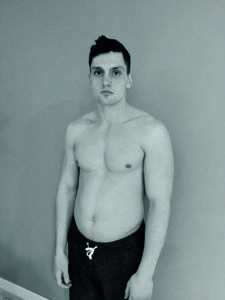 He’s a firm believer that once you’ve tuned your brain to the right channel, the results are inevitable. “The mind is such a powerful thing,” he says. “If you really want to become a better version of yourself, and truly believe that you can get there – I’m talking day to day here – then it’s definitely possible.”

Fitness has changed Markram’s life. “For me, boxing was my answer, but we all have different exam papers in life, so not everyone has the same solutions. Do what inspires you. I remember being 16 and looking at the cover of this magazine, saying one day I was going to make it there. I started working towards that, and now here I am.”

Related: How To Smash Your Fitness Goals Without Joining A Gym!

Even a fitness freak like Markram can feel lethargic or slow. His secret weapon: a cup of black coffee and a green apple. “I find this combo gives me the extra bit of energy I need to make it through my next workout”. For a mid-session push, it’s all about mentality, adds the boxer. “I like to remind myself how blessed I am able to do this exercise, because there’s someone out there with an injury or disability who would do anything to be
in my position.”