Find Out How This Strength Coach Lost 29kg

David Cross didn't have a wake-up call, he just wasn't getting laid

David Cross didn’t have a wake-up call. “No heart issues, impending diabetes or anything like that,” he says. “I wasn’t getting laid at all, which was probably the biggest concern.” This was 11 years ago, when Cross weighed in at 137kg: the byproduct of a corporate lifestyle that was big on booze, junk food and not much else. “It was just a drunk night at a pub and my mate said to me I was too fat, and that I would never change. I told him I’d do it.” The following morning he gave his old lifestyle a Viking funeral, wolfing down a full English breakfast – then hit the ground running.

A Gentleman’s Agreement
Through a friend, Cross tracked down a personal trainer and went along for a free session. “I died,” he says. “But some part of me enjoyed it, I think, because I went back.” Money was tight so he could only afford a single session a week. For the rest of the time he was left to his own devices. Admittedly, he was fairly clueless. He flung himself at cardio and light resistance training, relishing the challenge, testing the waters of new moves and new circuits. While the work was rewarding, change was slow. One the biggest lessons he learnt in the beginning was: be patient. “Look, it took me a long time to get that fat,” he says. “And while you can lose it quicker than you gained it, it still takes time. It’s difficult to deal with, because when you’re on this mission to change your life, you don’t want to wait. I’m pretty sure that’s why most people give up: they run out of patience and start convincing themselves they will never get there.”

However, since that agreement, Cross has stuck doggedly to training. He dropped down to 86kg – that was during his “manorexic” running days – before bulking up to 108kg through powerlifting. It hasn’t been easy. “When you’ve been that fat, you have a lot of internal wiring and brain chemistry that wants you to locate the closest full English and go to town,” he laughs. “It takes time to understand what your body is saying and what your triggers are when life gets shit, and how to best manage those situations.” What keeps him on the straight and narrow? “I enjoy how my body performs and looks, and I know that I never want to be a fat person again.”

The Big Fat Excuse
Cross now works as a strength and nutrition coach, running his own gym on Bree Street in Cape Town. He’s used to hearing excuses from potential clients on why they can’t lose weight. It’s made him an expert at calling people on their bullshit. “Weight loss is actually easy, but people go about it the wrong way. There’s so much nonsense out there on social media and being spouted by celebrities who don’t know their ass from their elbow,” he says. “But people still buy their books without a second thought. They need real-world, basic science that’s proven and tested over and over again, but some people just want miracles.”

While Cross is a powerlifter, he’s trained on both sides of the cardio/resistance equator. “Honestly, there aren’t really any negatives to either,” he says. “It depends on how you approach them. If you take something to the extreme, without building up to it, you’re going to get into trouble. When I wasn’t careful I suffered a lot of injuries as a result of either. “Both allow me to eat a lot more than most people – that’s a huge benefit for someone like me, who will always have that fat kid deep-rooted inside them.” 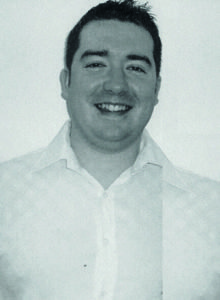 Exhibit A: protein choc-chip pancakes decked out with chocolate ice cream, raspberries and crushed Ferroro Rocher. It’s not something Cross eats often (“I prefer to go with the smartest choice when it comes to micronutrient consumption, that’s why I stick to whole foods”) but it is something that fits easily into his “If It Fits Your Macros” eating plan.

Sometimes his biggest motivation to keep training is so he can wolf down a massive supper with all the trimmings. “But I also have to be a role model, not just to my clients but to my 4-year-old daughter,” he says. “She is so active already. She can do three full bodyweight chin-ups no problem, plus perfect push-ups and squats without even being shown. Guess it’s a case of monkey see, monkey do. I want to continue to inspire her to understand her body and use it how it was meant to be used, and not how society has pushed us to be.”

One of the biggest mistakes most guys make when they start dieting is they cut out carbs. “They get such a bad rap,” says Cross. “And it’s completely unjustified.” Carbs provide immediate fuel to help you power-up during your gym sessions, helping you push further, lift heavier and keep burning calories for longer.