J’Something’s Tips For Losing Those Extra KGs, Living Healthier And Being Successful

Musician, TV cook and now weight loss machine: J’Something knows what it takes to tune up your life

A hectic schedule of travelling, gigs and cameos, João da Fonseca (it’s fine, you can just call him J’Something) was packing on the weight. He’d be the first to admit he’s never been ripped. “But this was bad!” he laughs. He would scroll through his Instagram feed after gigs, through countless pictures posted by fans, and what he saw wasn’t flattering. The fans saw a musician they loved – he saw a guy who could do better.

At his heaviest, Jay weighed in at 97kg, but even worse: he felt all of it. “Man, I had no motivation to go the gym,” he says. “My busy schedule became an excuse. I told myself I was too exhausted, I had too little time. That’s what your mind tells you.” At the time the artist, who fronts the jazz-soul-house melting pot that is Mi Casa, was riding a high. His music career was anchored by two chart-dominating albums, and his cooking hobby had taken him from Instagram to the TV screen. The craziest part: he was gearing up to open a restaurant.

Related: You Can Trick Your Brain Into Making You More Successful. Here’s How

Wait – say that last bit again. “I know, right? Me?” he laughs. Having his name behind a major eatery is still something that takes him by surprise.

He realised that he needed to bring his health in line with his success. But he also knew he was never going to brave the Pretoria traffic for a stint at the gym and lose hours on the road that could be spent in the kitchen or the studio. “I needed to bring the gym right here to my doorstep and scrap the excuses.” So he started planning.

Jay was born in Portugal before moving to the Eastern Cape when he was just 7 years old. It was a culture shock that left him reeling, and homesick. He couldn’t speak the language, and the land around him seemed foreign and impenetrable. His parents worked in the hospitality industry, and Jay spent those first years hanging out in the “staff village” attached to the hotel. A few moments stand out; mainly when he tried to dribble a rugby ball eagerly tossed in his direction by a group of kids.

“I told my mom, crying, that I hated this place – they don’t even know how to make footballs properly,” he says. As he uncovered the mysteries of South Africa, from the strangely-shaped footballs to the language decorated with clicks and clacks, he became immersed in the culture. Not only did he pick up English, Afrikaans and Xhosa, but he began playing cricket and rugby too. The music? The music came later. First in the form of a trip to the restaurant in which his mom worked, where he listened to a guitarist skillfully strumming on stage. He begged his mom for a guitar and lessons afterwards, but the interest was short-lived. Then, inexplicably, when he was 16, he suddenly knew he wanted to write songs. Since that day, the process has become something he turns to every day.

After finishing a BComm at Stellenbosch University, where the highlight wasn’t the course load but winning a Varsity Idols competition, Jay found himself back home in Port Alfred with nothing to do. He formed a band and started gigging at local bars and clubs. “It felt like, something… it felt like maybe I could go somewhere with this,” he says. He was being paid R100 a show. When his cousin visited for a World Cup game – this was back in 2010 – he was worried about the young musician. “I think in his eyes he saw my ambition, but he didn’t see where I could go in such a small town. He said, ‘Come back to Joburg with me,’” says Jay. The night before his cousin was set to leave, Jay lay in bed tossing and turning. He was scared of leaving behind the comforts of home and his fledgling band. But he also knew he needed to switch environments, find new inspiration and new opportunities. The following morning he packed up his guitar and his bags and set off with his cousin. 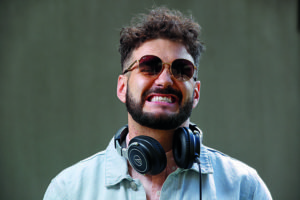 Jay started working at Soul Candi records, the studio where his cousin was working at at the time. He did the “crap work”, sorting out artist’s royalty statements, cleaning the recording spaces and making sure the fridges were stocked with drinks. But after spending months milling about in his cousin’s flat, it was a relief. “In many ways I was living the dream.” The real turning point came later that year. He was at a studio party when he discovered the final two thirds of Mi Casa – Dr. Duda and Mo-T – playing on stage. “I walked up and said, ‘Hey man! Do you think I can sing with you guys?’” he laughs. “I thought they’d laugh at me. But they just said, ‘Sure, take the mic.’” For the next hour he riffed over house tracks, tapping into the lyrics of songs that were nothing but ink marks in his notebook. After the show the audience started asking for photos.

Related: Science Explains Why These 9 Songs Are The All-Time Most Catchy, And How To Get Them Out Of Your Head

“I remember them asking where could they get the album. I laughed. I said, ‘I don’t even know these guys.’” Months later they were a fully-fledged band that had written a monster hit: “These Streets”. After two years of gigging with Mi Casa, recording two albums and keeping up the demands of a hectic tour schedule, Jay began to feel burnt out. He still loved the industry; he still lived to perform. But he needed a distraction. He declared Monday a cooking day and started learning recipes. But his Midas touch meant that nothing could remain a hobby for long. First, his creations began trending on Instagram, next, he had offers to cook on television. Now, he’s opened a restaurant.

The latter is an emotional moment for the singer who recently lost his father, a man who spent his entire life in the food and hospitality industry.

Something’s Cooking by J opened in Menlyn in Pretoria in March last year. The restaurant’s theme is a “home away from home”; a kind of Mi Casa es Su Casa if you will. And while the road to opening the eatery has been arduous but rewarding, Jay has spent the past few months focusing on another personal challenge. “I’ve been working out – a lot,” he says. Following an epiphany around his weight gain, Jay constructed a home gym inside his old garden shed. Armed with new equipment – including a calorie-melting assault bike – and an expert workout plan from MiFitness’s Rob Labuschagne, Jay got to work. With his workout space just metres from his studio, he no longer had any excuses.

In 12 weeks he tore through the weight, losing 8kg of fat and packing on lean muscle. But that wasn’t all about his hours in the gym – he also rejigged his approach to food. “I still love food, but I now understand how to eat,” he says. “I still eat pasta, but I watch my portions. And once a week I treat myself to a pizza – because, hey, sometimes you just need a pizza.” He’s discovered a passion for training; yet another motivator to add the myriad that drive him every day. With the weight gone, he’s got new goals, new ambitions: he wants to drop a little more body-fat and bolster his muscle mass. “The best part is, I’ve found a way to balance everything. I’m happy that I can play a gig, that I can appear on TV and that I can keep on working on my fitness,” he says.