It wasn't an easy journey, but here's how he did it.

Bread was his kryptonite. He was eating four slices for breakfast and another four for lunch. The starchy substitute had become a vessel for anything destined for his gullet – and it showed. Kyle Daniels was a couch potato, carbo-loading and never spending any of that surplus energy. And what he saw in the mirror, when he hazarded a glance, was a frightening trajectory. His waistline was ballooning and he was slowly slipping into scary territory. “I had a gym membership, but I lacked consistency. I had no motivation; I had no guidance – and that all just fuelled my complacency.”

This all changed in 2014 when he discovered the 12-week Belly Off challenge, an MH project that has been helping guys burn through their bellies and reset their lifestyles for years. It was the kick up the flabby backside he needed: “It was a competition and I wanted to win, so I started off strong.”

He was training every day and eating clean, chucking out the white loaves and choosing more nutritious options. The trajectory had shifted, and then, bang – the same hardcoded complacency returned. He told himself he couldn’t win; that there was just no point. That was rock bottom. “I went back to my old ways. But one day I just had this epiphany. For eight weeks I was able to push myself further and harder than I have ever been able to do before. I still had the ability to do that again – prize money or no prize money.”

Related: 20 Ways To Melt Your Gut

By the following year, less than a year after he had completed the Belly Off programme, he weighed in at a lean 73kg – a far cry from the one-man bread factory he had been 365 days prior. Through his journey he had discovered a passion for trail running, tackling 8km routes in Newlands forest and supplementing that daily cardio with three HIIT classes a week.

That work had real results: 23kg of real results. But success is never a straight line. He was leaner, but he was unhappy. “I looked too thin – it just wasn’t the body I’d imagined I could build,” he says. He stopped going to classes and put the brakes on his runs. A few weeks later, he was piling the weight back on. It’s a reminder of the importance of routine, and of how quickly good results can turn sour. However, it’s was also a reminder that setbacks are inevitable, and that clawing yourself back into fighting shape is the true test of your character. As Kyle neared another summer, he vowed to get back into shape before the beach days began.

Related: 10 Ways To Lose Weight Without Even Trying 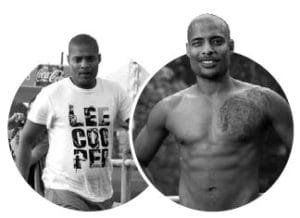 “I wanted to be able to see my abs again,” he says. That was enough motivation. He started training aggressively, clocking in four mammoth runs a week. His focus had shifted from speed training to inclines and leg development. The result? It felt more rewarding. The rewards were more obvious and it didn’t feel like a begrudging responsibility, but something he relished. Kyle also learned you don’t need a gym membership to get into shape. On his runs he would use the environment to his advantage, practicing bodyweight exercises on fallen logs or using the natural lay of the land make his push-ups more challenging.

The third time was the charm, he admits. For some reason, the new lifestyle stuck where others had failed, and now he can’t imagine his life without working out. “I am 20kg lighter now,” he says. “But it’s not just about how I look. I am mentally, physically and emotionally stronger than I was, and I appreciate life a lot more. I’m happier and I’ve learned to love the outdoors.”

He has started bringing his new ethos into the office, challenging colleagues to team challenges – such as seeing how many push-ups they can nail in a single “push-up meeting”. It’s earned him the moniker of “Coach Kyle” and he wears the nickname proudly. “People who didn’t know me before my transformation cannot believe I was overweight and unfit. I sometimes forget that I couldn’t even run a single kilometre,” he laughs.

Related: The 7 Simple Rules That Will Get You Ripped

Kyle’s Weight Loss Lessons:
1. Rope in a buddy, If they’re fitter and stronger than you, even better.
2. Take your energy out on the trail or at the gym, rather than eating.
3. Get comfortable with being uncomfortable. There will be times when you feel you can’t push your body any further, but there’s always one more.
4. Track your progress. Seeing real, objective progress is a reward that keeps on giving.
5. Never take more than a single day off from training.