Plus, he shares his life lessons and fitness formula

Sean Moran deals in make-believe every day as part of his job as a construction manager in the film industry, but it was reality that forced him to re-evaluate his health and his addictions. With 20 years’ experience in set building, Moran was needed to work long, demanding days, from 7am to 7pm, six days a week. While Moran was active and considered himself reasonably fit, it wasn’t his hectic schedule, unhealthy diet or lack of planned exercise that was the main cause for concern. “In June last year, I realised that my drinking habits were destructive, taking away any possibilities for building a balanced life with my family,” says Moran.

“At 38 years old, married with four kids, I was still acting like I was 18, meeting with mates and drinking beers, having a couple of laughs and many more beers. There was always another reason to drink: rugby season, cricket season, any reasons. Beer season was throughout the year.” His salvation came in this realisation. It wasn’t just about the drinking – but all the bad habits in his lifestyle. He needed to cut these unhealthy crutches and their influence on him. Moran turned to a trainer near to his home in Kommetjie – Neil Zietsman, who has his own gym, 3S Functional Training. Here’s what Moran learnt about breaking bad habits – and how to break a few of your own too.

Related: How To Stop All Your Bad Habits In Their Tracks 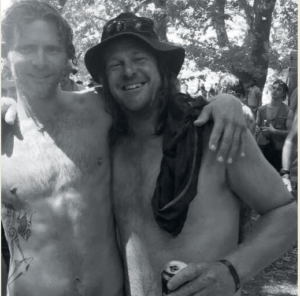 1. The Problem
“In June 2016, I realised my drinking habit had become destructive, taking away any possibilities for building a balanced life with my family. At 38 years old, I was still partying like a teenager, taking any opportunity to see friends – we’d always end up drinking. After a while it wasn’t about the socialising – it became an exercise in finding reasons to drink. When I decided to stop the booze and get healthy, I didn’t realise it would also be about changing all my other bad habits, too.”
The Lesson: Addiction applies to everything that you don’t have control over, whether it’s alcohol, drugs or food. Breaking those bad habits helps you to regain control.

Related: The Incredible Story Of How This Addict Went From Rock Bottom To Redemption

2. The Change
“I had to define the bad habits, and find replacements. For example, instead of thinking, ‘I’ll do it later, first I need a beer…’ I had to focus: ‘I don’t need a beer, I can just do it right now.’ Instead of planning time for beers or hanging out in bars, I’d go for a run or a surf. I also decided to cut out all alcohol and fizzy drinks and just drink water. I also cut out the quick-pizza-with-beers habit and focused on healthy, homemade foods – like trail mix when I’m on the go, or nuts, berries and biltong.”
The Lesson: It’s easier to replace a bad habit than to cut it out completely. Decide on a better behaviour and replace the bad habit.

Related: What Drinking 8 or More Beers a Week Does to Your Brain

3. The Strategy
“The first weeks were difficult on the mind and body. To deal with the stress, I ran, which helped me to keep my mind off drinking. And because I wasn’t drinking, I had time to think of positive things: to go surf, fish, swim or hike. That sensation of freedom motivated me to get fit and train hard as much as possible. That’s when Niel asked me to join 3S. I started in mid-June with three hours of training a week, which I did alongside running – 10km, twice or three times a week.”
The Lesson: Carefully combining functional lifting with a form of conditioning, like running, is the most effective way to lose bad weight and build a base of strength.

Related: From An Unhealthy Addition To Getting High On Running

4. The Results
“After weeks of detoxing, enduring headaches after cutting out the sugar, beers, sweets and bad carbs, I started to love the delicious healthy foods made by my wife. Now, I can’t do without it. My fitness is progressing well – I feel good, and consistently energised. I’m managing my work and family schedule a lot better – I’m in a happy space.”
The Lesson: “Have a clear mind, find what matters, keep focused and enjoy the ride.”

Use His Secrets: Sean’s Fitness Formula

Rule 1: He was all action and no talk.
“Sean had a real no-BS approach to his workouts,” explains coach Neil Zietsman. “Initially all he said was ‘I want to do some training.’ True to his word, he arrived at the gym two days later, put his head down and worked really hard without complaining. There really is no substitute for hard work, and his results – both mental and physical – show that.”

Rule 2: He changed his lifestyle.
“Sean didn’t only start training to improve his health – he also made big, permanent changes in his everyday life to improve his health. He stopped drinking alcohol, started a cardio programme and changed the food he was eating. He ended his bad habits and started new, healthier ones. All of these things helped him make a big change,” says Zietsman.

Related: 61 Small Habits You Can Change To Lose Weight

Rule 3: He broke his goals down into bite-sized chunks.
One of the biggest mistakes most men make when trying to live healthier lifestyles is to change too much, too quickly. “Sean had a big goal in mind and a system to get him there, with a personal trainer and a cardio programme. What he did well was break his big goals down into small, attainable goals on a daily or weekly basis. This meant he could push himself a little more every day and eventually get to where he wanted to be. A 1% improvement every day means a 365% improvement by the end of the year.