Robin Verhoog transformed his lifestyle and his diet to lose 31kgs.

It was 2014 when the proverbial shit hit the fan for Robin. Axed from his job, he found himself with spare time to assess where he was in his life. “I took a good, hard look at myself, and I didn’t like what I saw,” he says. “Staring back at me in the mirror was a tired, frustrated, unhealthy 116kg man who needed an outlet.”

Related: The 9 Weight Loss Excuses You Need To Stop Now

Like many aspiring big losers, he jumped on the new year, new you bandwagon and dragged his spare tyre to the gym. But he had no idea what he was doing. “I klapped those weights,” he laughs. “I was still boozing and eating like an animal; literally inhaling anything and everything.” However, that whirlwind of time in the weights room paid off. Eventually he began to lose weight. He finished 2015 six kilograms lighter. Proof that doing something, anything at all, is better than turning into a couch potato. “Yeah, I felt good,” he says. And even when his work schedule became overwhelming again, he was determined to stay on track.

One of Robin’s biggest challenges has always been his busyness. When he’s at work, his approach is tunnel-visioned. It’s about doing the best job that he can, and as a creative, it put a lot of strain on the rest of his schedule. “I just lacked the time to focus on anything else,” he says. When he did have time off, he would grab the chance to de-stress with colleagues after work at the pub, knocking back kilojoule-heavy drinks and soaking up the brews with greasy food. It was a lifestyle that added inches to his waistline, tanking his self-esteem and gutting his drive to turn things around.

Add that to a bad sleeping pattern – it wasn’t uncommon for him to get as little as three hours of shut-eye a night – it wasn’t surprising that his stints at the gym were doing to help him lose weight. Looking in the mirror was a harsh reminder of his unhealthy lifestyle. But it was one of the most important steps he took. The acceptance that he had a problem led to him researching training and nutrition tips on the internet, joining forums and equipping himself with the knowledge to guide and inform his weight-loss journey. Armed and dangerous, he was ready for a change.

Related: Why Less Hours Of Sleep Lead To Weight Gain 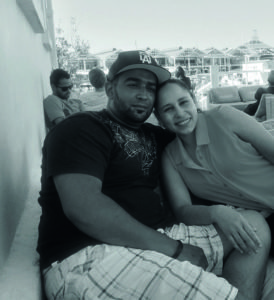 To lose weight, he approached his plan with something that had been sorely lacking in his life: a routine. “My training regimen and meal plan became strict and informed,” he says. Once he knew what he was doing, the focus followed. He worked on small tasks, first improving his form and conditioning and then moving on to adding weight and mixing in new methods and techniques. Instead of using his days off from the gym to work, he started spending more time with family and friends. For the first time, it felt like he was truly beginning to relax.

He cut out the post-work drinks, and replaced sugary beverages with regular trips to the water fountain – adding a few valuable steps to his pedometer. The results speak for themselves: in just two years he dropped from a 38 to a 32-inch waist, losing 31kg in total. His self-confidence is back, and so is his motivation – whether that’s at home, in the office or at the gym. “Not only do I feel like I have more time to relax and spend with my family, but I’m more focused and I cope with stress far better,” he says. “But most of all, I’m happy.” It’s been a long journey, but he attributes his success to keeping his goal in his sights, and sticking doggedly to his plan to achieve it.

Related: Here’s How To Shed That First Kilogram

“I switch it up every day, swapping between free weights and barbells. And I add a strong finisher to my routine that targets multiple muscle groups.” For example, he finishes his free-weights sessions with dips and leg raises. Barbell days are crowned with pull-ups and hanging leg raises.