Omega has long lived by a marketing tool that never gets old: the first watch on the Moon, and July marks 50 years since the great feat.

Omega has long lived by a marketing tool that never gets old: the first watch on the Moon, and July marks 50 years since the great feat. “We choose to go to the Moon,” a famous tagline from JFK’s speech made in September 1962. His inspiring words came in an effort to win the race to the moon. His goal was later realised in 1969, with a successful Apollo 11 mission.

There were certainly no guarantees the mission would succeed. In fact, the moon provided very few safe spaces to land. Neil had roughly 60 seconds to find the right spot before their fuel ran out. The highly-skilled astronaut kept a calm temperament, finally resting the Lunar Module in the nick of time, and delivered the immortal words, “the eagle has landed”.

Of course, with the life-threatening task to set foot on the moon ahead, NASA needed to safe-guide their astronauts with mechanical instruments that matched the rigour of the mission. And so Omega’s history with space exploration began.

The History Behind The Speedmaster 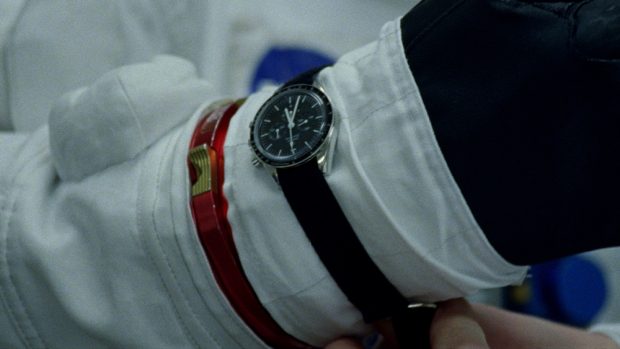 Not only is the Omega Speedmaster the first watch on the moon, it also holds the record for the first watch to venture into space. It wasn’t even a full month after JFK’s inspiring speech in 1962, that pilot-turned-astronaut Walter Schirra wore his personal wristwatch aboard the famous Mercury Atlas 8 Spacecraft. With a successful mission, Omega gained legendary status and became an official timing partner for NASA.

Related: 5 Questions With An Astronaut

Even more significant, astronaut Ed White made history nearly three years later for the first American spacewalk. And strapped to his arm was none other than the Omega Speedmaster. Although the Speedmaster was known to NASA well before official testing started for the Moon mission, the Speedy still had to compete with other major brands in order to finally be dubbed the Moonwatch.

When NASA decided to equip its astronauts with watches as part of their tool kit, it appealed to 10 brands – asking them to send in models for testing. The competition was quickly narrowed down to only three brands which all met the criteria: Rolex, Longines and Omega, which sent in multiple samples for various tests. The watch they were looking for was to be worn outside the space suit – and the tests were rigorous.

On two occasions the Rolex stopped running and the crystal in the Longines timepieces started to warp and eventually came loose during a high-pressure test. With only a 21-minute gain during a decompression test and a luminescence deterioration on the hour markers, the Speedy survived got NASA’s seal of approval.

James Raga, the NASA engineer responsible for testing the Speedmaster in 1965 says the watch was there for backup, in case the astronauts lost the capability of talking to the people on the ground, or the capability of their digital timers on the lunar surface. In that case, the only thing they had to rely on was the Omega watch on their wrists.

When Neil Armstrong took his giant leap for man kind, he actually left his Speedy behind in the Lunar. All the crew were equipped with a Speedy onboard the Lunar Module Eagle. However six hours after the Lunar landed, Neil Armstong took his first steps on the surface of the moon, but without his wristwatch. This came after he decided to leave it behind due to an electrical timer malfunction.

Related: So This Is How Astronauts Have Sex And Poop In Space

Roughly 15 minutes later, Buzz joined Neil on the Moon’s surface with his Speedy strapped to his arm. Since then, Omega has honed in on their ultimate horological pick-up line: the first watch on the Moon. 50 years later, Omega is still the timing partner for NASA.

Two of their watches are still standard issue. The current Speedmaster Professional Moonwatch is called into service for missions and activities outside of the shuttle or space station, whereas the digital Speedmaster X-33 is the go-to inside the station of the shuttle.

For half a century, the Omega Speedmaster has witnessed events that have tested the limits of physical endurance and left an unrivalled legacy in space exploration. As such, the chronograph has earned a legendary status and in honour of all its predecessors, Omega has launched its special 50th anniversary limited edition Speedmaster. Only 1014 pieces are available, and the legendary new speedy has been created in a unique, new alloy called 18K Moonshine Gold and embodies an impressive representation of the brand’s adventurous pioneering spirit. 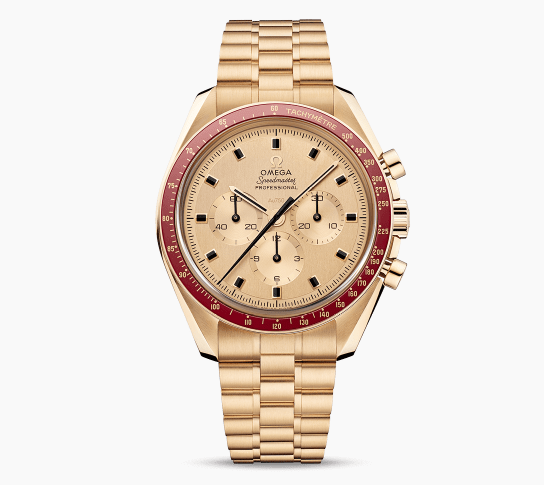