The coconut sex position is taking the internet by storm. But what exactly is it?

It’s gone viral on the internet, even reaching meme status. So what’s the buzz? The secret to great sex is spelling ‘coconut’ with your hips, apparently. What originated as a Facebook post on the Kilimani Mums Udaku Zone Facebook group has gone viral with the internet sharing their findings of the “Spell Coconut” sex position – with mixed and often hilarious results. 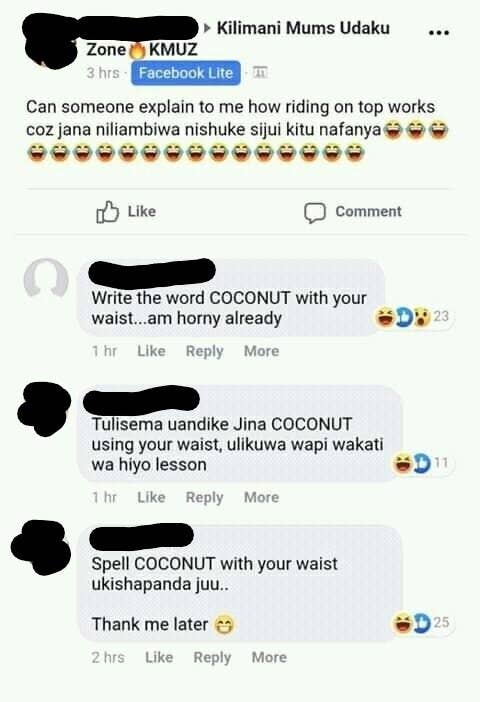 As the thread suggests, make sure she’s on top and then get her to spell the word “coconut” with her hips. Just tell her to be gentle, for fear of penile fractures!

Related: The Sex Position Most Likely to Break Your Penis

If you’re up for a laugh, head over to Twitter and type in “coconut sex” in the search bar.

Having sex with a girl last night and she just kept spelling coconut out loud, strange behavior

Currently lying in bed, it’s 12:21am and I’m spelling COCONUT with my waist while my boyfriend lays sound asleep next to me.. little does he know, morning sex is about to be lit. ? thanks girl pic.twitter.com/N2LFDA68dz

Better yet, give the coconut sex position a try and let us know how it went down via our social media channels!