1. Dance Under the Stars
Instead of splurging on expensive stadium seats, buy tickets to an outdoor concert. “You can move around, dance and meet women,” says Dr Christie Hartman, author of Changing Your Game: A Man’s Guide to Success with Women. Hint: a blanket goes a long way.

2. Let The Booze Do The Talking
Asking, “Cereal or toast?” probably won’t send sparks flying. But “Beer or wine?” just might, because alcohol is inherently sexual. Spot a hottie at the store? Ask her to help you pick out drinks for the women at your braai – and then invite her to stop by for a cold one.

3. Get Sweaty With Women
Play frisbee or beach bats – women enjoy laid-back group sports. After a game,  propose beers with the team so you can secure face time with any hot prospects. “Men are turned on by side-by-side tasks,”  says Dr Barbara Keesling, author of  The Good Girl’s Guide to Bad Girl Sex (R180, Kalahari), “but women  prefer face-to-face contact.”

4. Start Saving Lives
Volunteer at a triathlon or a local fun run. It’s a one-day commitment and an easy way to meet (and impress) fit women. In a Cornell University study, women favoured altruistic guys  for both relationships and one-night stands.

5. Fly Solo At Weddings
Before you whine about all those weddings, consider this: the romantic  setting primes the bride’s single gal pals  for pairing off. And as a friend of the  couple, you’ve been pre-screened.  You’re not trying to be one of the guys  from Wedding Crashers but you do want  to wear your best tailored suit: men in  well-fitted suits are seen as more successful and confident than guys in baggy attire. Look your best and who knows what  could happen.

6. Celebrate The Sun
Sunshine casts you in a better light: women are more likely to give a man their digits on a sunny day than on a cloudy one, a French study found. “It seems mundane to talk about the weather,” says Hartman, “but saying, ‘Don’t you love this sun?’ can feel like you’re celebrating together.” It’s a perfect pick-up tactic at the park.

7. Invite  Her To Play
Drooling over  her string bikini  is not your way  in. “Women don’t trust guys who  do that – they  feel vulnerable in beach situations, when they’re in minimal clothing,” says Hartman.  So invite her and her friends to  play volleyball  or to kneeboard in the surf. If  your approach is social, not sexual, she’s more likely to say yes.

8. Let Her Lead The Way
Your new pick-up line: “Can you point  me to the art museum?” In a French study, men who asked for directions before  inviting a woman to grab a drink were nearly five times as likely to secure a date as those who skipped straight to asking her out. “It’s easier for a woman to say yes to something big after she’s said yes to something small,” explains Hartman. Suggest a place that’s within walking distance so it’s convenient and non-threatening.

10. Look Your Coolest
We know: your Hawaiian shirt is ironically stylish. But 82% of women hate them, a match.com poll found. The look the ladies said they prefer: khaki shorts, a polo shirt and aviator shades. 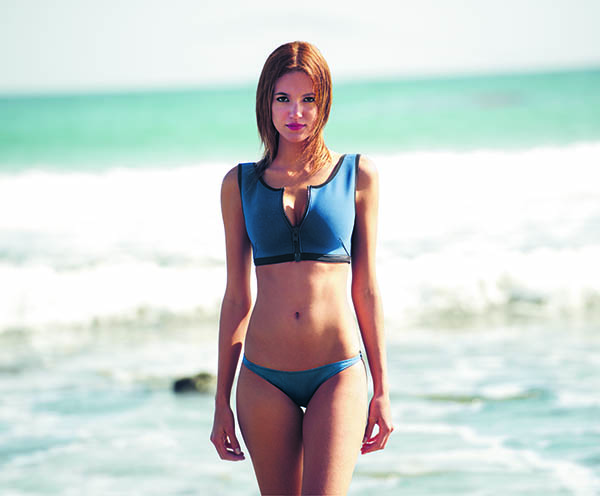 11. Tame The Beast
If you let your chest hair run wild all  winter, you need to shed your fur for  shirtless season. In a Remington survey, 40% of women said trimmed, not shaved, chest hair is ideal. Use clippers to cut it down to a centimetre.

12. Take Up Salsa Dancing
We’re not suggesting that you don a  Ricky Martin outfit, but dancing classes will be packed with sexy women looking for guys who know how to dance. Take a few lessons to master it – you may even catch the eye of a woman in class. The Cape Town Salsa Festival will take place from  the 20-23 November 2014.

13. Flaunt Your Skills
The recipe for a boring first date: take her to her favourite restaurant. “Guys often make the mistake of designing dates around the things she likes to do,” says Engler. The smarter strategy: push her out of her element. Engler cites an early date with her husband as proof: “He took me  to the mountains, to a place I’d never go alone,” she recalls. “Then he said, ‘We’re going fishing.’ He cleaned the fish, cooked it and hand-fed it to me. He was so confident. These little feats of masculinity really turn women on.” Are you great at soccer? Kick a ball around together. A grill master? Plan an intimate backyard braai for two. You get the idea.

14. Show Her The Bloomers
Take your date on a botanical garden tour. “It shows her you’re an open-minded guy who appreciates aesthetics,” says Hartman. If that doesn’t seal the deal, the blooms will. In a French study, women exposed to flowers rated a man as sexier.

15. Pack A Picnic
Spreading out a blanket at the park is sweet, but picnicking where there’s privacy – a scenic overlook, for example – is hot. Bring a citronella candle to ward off bugs and set the mood. And pack fresh fruit: “The sexiest fruits – like strawberries – are in season,” says Engler. “You can drizzle the juice on her breasts and lick it off.”

16. Unplug on Holiday
Working while on holiday is an intimacy killer. “It tells her that your work is more important than she is. At least that’s how she’ll interpret it,” says Hartman. If you can’t unplug, set aside an hour to work as she suntans. When that hour is up, switch off completely.

17. Run In The Rain
The Notebook has spawned legions of women who fantasise about making out in the rain. Take it up a notch: “I used to run with my boyfriend in the rain,” says Engler. “There’s something sexy about letting it pour on you, your clothes sticking to your body.” Pause to rest, and then while her heart is still racing, go in for a kiss.

18. Get Dirty
Spend a Saturday together trimming your bushes. (Not those bushes!) And forget the gloves. “If you’re willing to get dirty, garden work can be sexy – the muddiness, hosing each other off afterwards,” says Engler. 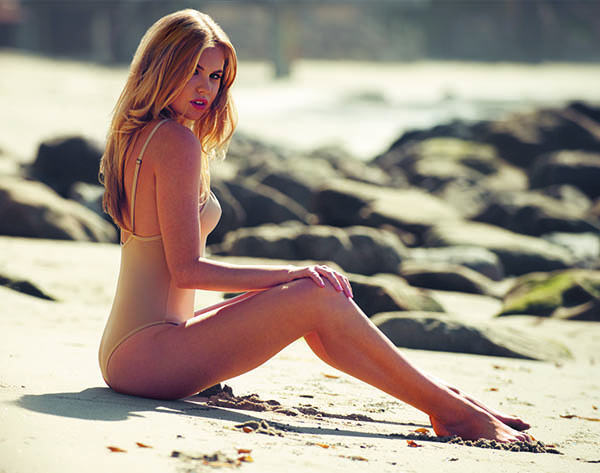 19. Take One More Trip
You’ve already lounged on the beach and escaped to a B&B – what more could she want? One more holiday. Sixty-five percent of travellers think adding romantic getaways would enhance their relationship, a hotwire.com survey reveals. Another poll found that couples who travel together have a better sex life. “The instant you put some women in a hotel, boom, they go for the bed,” says Keesling. “It’s big and inviting, and the idea that people may hear you having sex is a turn-on.”

20. Pamper Her
Make sure you pre-arrange the hotel’s  honeymoon package – champagne in the room, a fruit tray, plush robes, even if you’re not newly-weds

21. Split Up For A Day
Seven days of non-stop togetherness  can drive even the most committed  couple crazy. So set aside a day of your  holiday to go your separate ways – she  hits the beach, you play golf, say. Instead  of reuniting at the hotel, meet up at a  restaurant, says Hartman. That way,  your reunion seems like a date, which makes heading back to the hotel room  feel naughty. Not to mention a good  opportunity to show her how much  you missed her.

22. Hook Up In The Changing Room
She’ll probably say no if you invite yourself along for bikini shopping. (Fitting-room lighting is notoriously unflattering.) So suggest she tag along when you shop for new swimming shorts instead – and choose stores where the fitting rooms are quiet. “If she admires your body, capitalise on that: start kissing her,” suggests Hartman. “Then see how she responds to your touching her.” Hartman’s advice: stick to oral or manual stimulation since intercourse can be tough to pull off quietly.

23. Play Naked Games
If you have access to a private pool, play  a game of naked Marco Polo. “Turning  an innocent game into something naughty is always fun,” says Keesling.  No pool? Take her to a lake or a dam, where the water is murky and protective, suggests Hartman. If she’s not comfortable  going completely nude, then make  stripping down part of the game and  play in your underwear instead.  Somewhow it just seems sexier than  a swimming costume.

24. Master Pool Sex
The pool is not the place to experiment. You need to dive in with a plan, or you could end up in deep water. Stick to these three positions: (1) Standing in water up to your collarbones. She leans against the wall, you lean into her. (2) On the stairs. She sits on the steps, you stand in front of her. (3) Rear entry. She leans over a sturdy pool mat, you stand behind her. “Keep it smooth and slow,” says Keesling. This  minimises the amount of water that can surge inside her and wash away her natural lubricant. Need more glide? Grab  silicone-based lube, like Fun Factory Body Fluid (R255, Matildas).

25. Hook Up Under The Stars
Take her to Sutherland, because not only is  it filled with sheets of flowers, (see number 14), but it’s also home to SALT, the largest optical telescope in the southern hemisphere. Spread out a blanket, enjoy some intimate stargazing and go at it like the world is ending.

26. Tease Her With Temperature
Here’s a hot way to refresh your sex life:  as you stimulate her clitoris, apply a little cooling lube, such as Bijoux Cosmetiques Crazy Cold Intimate Gel (R340, Matildas). A few minutes later, take a sip from a warm beverage and go down on her.  “The change in temperature is very  stimulating,” says Hartman.

27. Make Ice Play Fun
Applying an ice chip to her nipples may provoke squeals and an areola erection, but applying ice down below is often more shocking than sexy. If you’re still gung ho about ice play, coat your cubes in silicone lube first, recommends Hartman. She’ll still feel the cold sensation, without being as miserable as Kate Upton in Antarctica.

28. Turn Off The Aircon
Yes, summer is all about turning up the heat but consider doing that literally.Switch off the air conditioner, close the windows, and turn off the fans. Then have sex. “Seeing your partner sweat  can be a turn-on,” says Hartman. Even  if you know she’s sweating because the room is hot, you subconsciously credit your steamy romp.

29. Be A Swinger
Sex in a swaying hammock or swing is an easy way to add power to your piston. “For the hammock, spooning sex is best. If you’re both lying on your side, no one’s back is arching too much,” says Hartman. “In a swing, the woman on top straddling you is easiest.”  Even if the sex is a total fail, the encounter can still be a success. “Being creative, trying stuff in weird places or positions, and having it not quite work out can  be really fun,” says Hartman.  “Just laugh about it.”