Here's how you can run your day like a boss entrepreneur.

James Park Lives By The Clock. To go toe-to-toe with behemoths like Apple and Under Armour in the wearable fitness market, Park, 39, manages every minute with ruthless intention.

You might never think that a man who every day wakes up more or less at the same time  (7 am), eats basically the same breakfast (one banana), and knows his daily commute down to the minute (14), could come up with the idea  for Fitbit while lying on his couch.

Park grew Fitbit from two guys  in a flat in 2007 to a R40-billion company with more than 1 000 employees today. He jumped into the deep end of the American startup culture and learned to swim. He devours words at warp speed, always delegates and minimises meeting length to maximise his team’s individual efforts. He’s only off when he’s recharging (sleeping) – just like the device he created. Boost your own productivity by adopting Park’s brand of daily discipline.

Related: What Happens When I Work Too Hard?

To face a high-stress situation, like a major presentation or a live interview on national TV, Park modifies a psychology hack known as exposure therapy. Basically, you desensitise yourself to the object of your fear by gradually ramping up your exposure to it. Park practiced his initial public offering speech almost 100 times. A good strategy is to start with no audience and then build up to a room full of colleagues. “Really, the only thing to keep you from being nervous is good preparation,” he says. 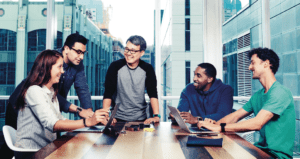 Some meetings at Fitbit last just 20 minutes, and none of them runs longer than 50. Park prefers that a clear-cut agenda be set ahead of time, which ensures efficiency. “Cutting down on the number and length of meetings makes people think about which meetings are valuable,” he says. Park also carves out no-meeting, deep-thinking periods. They’re often scheduled in the afternoon.

“People appreciate long stretches during which they can focus and do concentrated work,” he says.

Nothing diminishes the luster of a brilliant idea like a long, confusing explanation. “It’s all about clarity and brevity,” says Park, who bootstrapped his startup by sweet-talking investors. The keys: first, get outside your own head. “When you just think about the pitch yourself, you don’t have a lot of people understanding the problem.” Review your pitch with multiple colleagues to make sure it’s clear and easy to comprehend. Second, keep it short and sweet – 20 to 30 seconds max.

Park admits that he tends to put things off, so he’s learned how to deal with it. “One way is having aggressive deadlines,” he says. A fast pace has several benefits: It helps team members hone their skills and demands creative thinking and problem solving. Plus, if you do fail, you’ve at least made progress so it’s not a total waste. To stay on track, create mini deadlines for segments of larger projects, and bake in the evolution, with deadlines for an initial draft, a run- through and a final draft.

Related: Why Being a Morning Person Makes You Better Than Everyone Else

Target the bottom line (and your waistline) with efficient workouts. Park says he maximises his sweat time with all-out effort as often as possible. “I run for 10 to 20 minutes and then do 10 to 15 minutes of calisthenics – push-ups, pull- ups, things like that,” he says. Throw in commuting to work on foot, which Park does as often as he can, and it’s easy to understand why the man is in the best shape of his life. He now runs a mile (1.6km) in 61⁄2 minutes – 30 seconds faster than his high school time.

Schedule time to think. It sounds obvious, but who really does this, and when  was the last time you saw  that on an Outlook calendar? “Time for reflection is important because in meetings you’re in react mode,” Park says.

To focus on real priorities at work and in life, Park puts on his headphones and listens  to music for a 30-minute walk along the San Francisco Bay Trail. “Thinking about the long-term vision for the company, for example – I can really only do that when I have time for myself.”