He landed with a snap, his leg buckling painfully underneath him as he collapsed onto the roof. Ryan Botha had jumped down from almost five stories up and knew he was going to hurt himself. But nothing, not even knowing that, could prepare him for the pain that now surged from the mess of broken bones in his limb. “I gritted my teeth,” he says. “I could see the bone bulging under the skin. This was bad.”

Just a few metres away a man was dying, choking on his own blood after falling from an even greater distance and landing on his head. Ryan would later find out that his calculated leap of faith had bought the injured partygoer precious minutes that ultimately saved his life. But in that moment post-impact, he only had one thing on his mind: crawl. 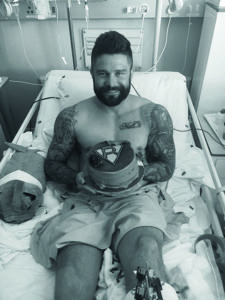 The Jump
In 2003, Ryan was a club footballer with a promising future. His career until that point had been marked with appearances for a string of top clubs, from SuperSport United and Wits University here in SA to FC Tervarit and FC Mypa in the Finnish Premier league. But this year his game plans were derailed when he was sidelined by a severe knee injury.

It was a bitter pill to swallow, and the footballer found himself plunging into depression. “That was a dark time,” says Ryan. Those days were a cycle of negative thoughts, injury rehabilitation and long talks with his family. It was the latter that helped pull him out of the darkness and back onto the pitch when he finally healed.

Wheelchair-bound and unsure whether his leg will ever recover, it’s unsurprising that Ryan thinks back to that time again now. For an active guy who can usually be found in the boxing ring or in the weights room, being forced to sit still is an agonising state. “But if you asked me if I’d go back and do it all again, I’d jump, without a doubt,” he says.

Ryan was at a New Year’s Eve party. In his own words, it was low-key. “This wasn’t a bender. This was the party before the party, and the atmosphere was relaxed,” he says. He was in a pool overflow area talking with his friends and soaking in the view as the sun crested the shimmering ocean that has turned ever square inch of the area into prime real estate. “That’s when we heard the scream,” says Ryan.

According to news reports, an Australian tourist had been trying to take a selfie when he fell from the balcony of the overflow area. He plunged over eight metres, hitting the roof of one of the properties below, before bouncing onto the roof of an adjacent house. The party erupted into a chorus of shouting, as the man’s friends dashed helplessly to see how they could save their injured friend. “I started looking for a way down,” says Ryan. “I didn’t even think about it. I know how to perform CPR, and I knew without it, this guy was going to die.”

The footballer-turned-model was in the process of clambering to a lower precipice in order to narrow the distance between himself and the injured man when people began screaming that he had stopped breathing. “That’s when I knew I had to jump.” As he leapt, he seemed to hang in the air. He knew he had to clear a two metre gap to avoid falling an even greater distance and missing his target completely. And when he hit the roof he was going to try and roll, softening the blow. But the impact swept his legs from underneath him. He felt the force of hitting the roof clatter through him. “And I heard my leg snap.”

The Survival
There are two things he remembers about lying on that roof. First, the sound of the injured man choking on his own blood. Second, the searing agony of his broken leg like a painful anchor keeping him rooted to the ground. “I waited for the adrenaline to kick in and I started to roll towards him.”

When he pulled himself over to the Australian tourist, he could see he was a in a bad way. The man’s face was bloodied, and a pool of scarlet was beginning to puddle around the base of his skull. “And that choking sound was so bad.” He turned his neck slightly, wary of antagonising a broken back or neck, and the man’s breathing seemed to improve. “He was kind of conscious, so I kept talking to him.”

Only later would he find out from the doctor that the small movement had saved the man’s life, buying him precious minutes until the paramedics arrived. Medical teams secured a ladder and climbed to the top of the roof, and dashed to the man’s rescue. Ryan knew his work was done, and he rolled away, gritting his teeth as the last drops of adrenaline began to fade, and the pain in his leg became overwhelming. The pair were later craned to safety, and taken to hospital for further care. 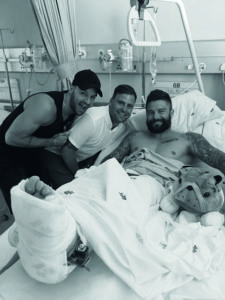 The Recovery
From the moment paramedics arrived, Ryan’s memory is hazy. He started to drift in and out of consciousness as the pain ebbed and flowed through his body. “The doctor basically told me I was clinically screwed – that he’d never seen a foul like this,” he laughs. “He wasn’t sure I’d ever be able to walk again.”

He had to remain in hospital for 15 days, undergoing surgery as six pins and a plate were inserted under the skin to help the bone reform and regain its old shape. “There were about five minutes where I got lost in some dark thoughts,” says Ryan. “But then I remembered what I went through with my knee injury, and how many people were there for me, and I knew I had what it would take to get through this.”

He also counts himself lucky to survive at all. He says it’s down to his training, that his time on the pitch has prepared him for hard knocks.
“Apparently the average person would’ve been in far worse shape after a drop like that,” he says. “They would’ve had a broken back and a smashed hip in addition to a broken leg.”

The Australian tourist was released from hospital, and is expected to make a full recovery. That’s also lucky for a guy who Ryan says “landed on his face” from a height of around eight metres. Knowing the long road of recovery he has ahead of him, Ryan doesn’t regret his decision to jump.
“You’ve got to weigh it against how I would’ve felt if I did nothing and he died on my watch. No, that’s not a feeling you can live with.

“We were raised to do what we can to help people,” he adds. “I got that chance and I took it.” 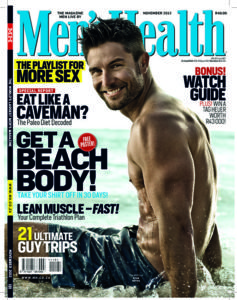