Caleb Mutombo is breaking down the biggest boundaries with bodybuilding

How are you going to do it? It was one of the first of many questions Caleb Mutombo was asked when he told his friends and family he was going to be a bodybuilder. Standing at just over a metre tall, his limbs stunted and hamstrung by sickle-cell anaemia as an infant, the teenager didn’t have an answer. But he knew one important thing: he wanted to be strong like his idols, to live proudly in the body that he has. 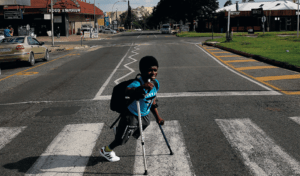 Making Ends Meet
Caleb was born in the DRC against a backdrop of political upheaval and violence. His parents, struggling to make ends meet as they scavenged for work in a country clamped in the vice grip of a civil war, were thrown another curveball: two of their sons needed urgent medical attention. “I remember, they scraped together what money they could,” says Caleb. “And then they came to South Africa.”

Caleb was just two years old, unaware of the massive wager his family had taken, betting their future on foreign land. When they arrived in South Africa, doctors discovered that the toddler and his brother Kalala needed an urgent blood transfusion. Caleb’s older sister Jemima was identified as the perfect donor for her sibling, curing him of the sickle-cell anaemia and ultimately saving his life. But Kalala wasn’t as fortunate; they couldn’t find a match.

Surgeons then operated on Caleb’s maimed limbs, attempting to restore normal function. His brother also went under the knife. Unfortunately the damage had been done. Caleb stopped growing at a young age. His right leg is longer than his left, and his left arm longer, more flexible and more mobile than his right. He needs crutches to move about. “People teased me,” he says. “But only some of them – the kids, you know. Most people were nice, and I make friends easily.”

Related: Be Their Hero:Rugby’s Siya Kolisi’s Journey To Fatherhood

For a while his family moved across the country. First from Cape Town to Joburg, then to Pretoria; and then, they were scattered across the continent. “They couldn’t make ends meet here, my parents,” explains Caleb. “ So they went back to the Congo, and would send us money whenever they could.” Caleb and his siblings bounced between the homes of family that remained, sleeping in crowded lounges and scrabbling together what food they could.

Eventually they were left in the care of his oldest sister Betty, who after treading water financially for years, eventually ran out of energy and funds to look after them. That’s how Caleb and his brother found themselves in Kid’s Haven, a home in Benoni – his sister Jemima was taken in by foster parents. But his past doesn’t faze the young bodybuilder. In fact, his upbeat tone and optimism never wavers. It is what it is, he says. “It’s all part of my purpose.” He had his brother, after all. 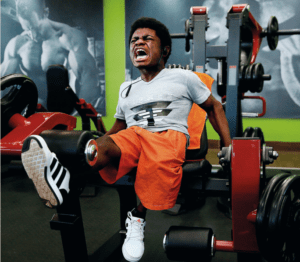 The Right Path
In middle school, spinning tops gave way to a new trend: “working out and getting ripped”. Kids idolised the superheroes on TV screens and Facebook pages. Their idols were brawny barbarians such as Arnold Schwarzenegger, and internet stars dominating the weight room. Working out was a way to impress your mates, maybe even a way to land a girlfriend. But Caleb saw something different. He had an epiphany: this new trend was an opportunity to excel in something physical, for the first time in his life. His condition meant he couldn’t compete in traditional sports, leaving him on the fringe as his schoolmates would kick off a pick-up soccer match in the schoolyard.

Even at a young age, the bodybuilder had noticed he had more muscle than most. While the disease had stunted his growth, his limbs were strong and sinewy. He leveraged that unexpected power and began doing bodyweight moves at the home. “They said I was too young, and it wasn’t safe for me to go to the gym,” he says. “But I did what I could do by myself.” For years he worked out for three hours a day – every day – training his entire body. He was obsessed. That commitment translated into real progress, his muscles growing quickly despite limited access to protein sources. When he later discovered bodybuilding was a competitive sport, he told his friends that was his goal, his new dream. “They’d joke with me and say, what, you want a thong up your butt?” he laughs. “I said hell yes – if it means I can stand up there and be an inspiration to others, I’m there.”

Related: From Addict To Athlete: This Guy Did A Complete 180

When he was 15, a group of visitors to the home found out about his aspirations. They headed up a charity drive to have a gym built at Kid’s Haven; and just a few months later, staff from the nearby Virgin Active arrived with a truckload of new equipment to build an outdoor gym. “I was so excited, I jumped straight out of bed and came running outside,” Caleb laughs. He would meet friends along the way. One, a trainer, who would leave work to pick him up and teach him new moves, and school him on protein-packed diets. He learnt how to use a Smith machine to complete previously impossible moves, such as the bench press and squat. Now, Caleb – at just 37kg – is able to squat hat same weight on his back, and bash out at least 50 push-ups in a session. But back then, it was a learning experience – he was unlocking the full potential of his body. “But I knew I was on the right path.” 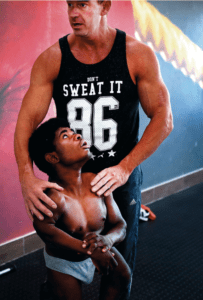 Keep Fighting
When Caleb was 18, his brother passed away. Kalala had been struggling with meningitis, and died after he was taken to hospital. It’s a blur now for the young bodybuilder. He remembers talking to Kalala on his last night, asking him if he was okay, and then leaving to give him space to recover. “It just happened so suddenly.” His parents came; he hadn’t seen them for years. It was a brief and sad reunion. For Caleb, weightlifting became a way to escape some of the harsh realities of his life, to leave behind the unchanging, and often lonely environment . And with bodybuilding, he could turn his attention to realising his dream, and finally taking his efforts to the stage.

Last year he took part in his first competition. He was knocked out in the first round. But the placement didn’t matter. “The judges were crying when I took to the stage, when I was flexing,” he says. “I smile when I think about how many people I touched that day, how many people I hope I inspired.” He was hooked. He met trainer Ryan Manthe, the owner of the Trinergy gym, at the event. The coach taught him how to pose like a bodybuilder. He helped him secure sponsorships, and hooked him up with proper kit. That enabled him to compete more often. And the next time he took to the stage? He did a little better. “I want to compete more often. I want to travel the world and compete, to inspire people and show them that everyone has a purpose in this world.” 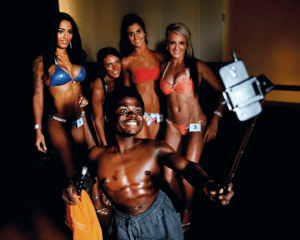 Caleb wants to do more. He wants to try boxing, he wants to be a fighter – he wants to go beyond the aesthetics and embody what it means to be functionally strong. “We all have hardships, even the wealthiest of people. And whatever those hardships may be, we cannot allow them to hold us back. We must have a goal, a vision, and see the prize of reaching that goal,” says Caleb.

Arnold Schwarzenegger
“For me, life is continuously being hungry. The meaning of life is not simply to exist, to survive, but to move ahead, to go up, to achieve, to conquer.”

Simeon Panda
“Life can be hard as hell, so if there’s anything we need to learn, it is to pick ourselves up when the proverbial hits the fan and keep going.”

Mike Rashid
“Rise and grind! Nothing comes to a sleeper but a dream!”

Visit kidshaven.org.za to support Caleb and his home.