Rise From The Ashes: The Story Of Long Jumper Luvo Manyonga

Luvo Manyonga has just won gold in the Men’s Long Jump at the 2018 Commonwealth Games with a jump of 8.41m, setting a Games record. Compatriot Ruswahl Samaai took the bronze in 8.22m. What a games our boys are having!

Related: Commonwealth Games: SA Shine On Day 5 Down Under

We caught up with Luvo after his silver at the Rio Olympic Games in 2016. His story is nothing short of inspirational. Have a read below….

His feet hit the sand, his body sending up a spray of granules. Luvo Manyonga’s heart was beating hard as he watched the jumper gather himself up in the pit, dusting sand from his red, white and blue kit. The world was spinning in slow motion as a stadium of eyes turned to the scoreboard. A centimetre. A single heartbeat that was enough to put the US’s Jeff Henderson in the lead.

Luvo’s heart sank as the gold medal was torn from his grasp. But in that same breath he saw himself just a year earlier: an addict without hope, a “dead man” who would plead, grovel, steal, do anything to get his fix. And the anxiety fizzled away, leaving behind an almost foreign feeling: contentment. “I sat there and I thought: I came back from that, I turned it around. And here I’m standing winning a silver medal at the Olympics?” he laughs. The weight of that medal against his chest, those tangible grams – that was proof he had come back from the dead.

The Gift
Luvo was always a natural athlete. Ask his family, ask his friends: “this kid could run”. Growing up in Mbekweni, a small township straddling the outskirts of Paarl, he put bare feet to dusty road whenever he got the chance. “It was always about winning for me; to show that I was faster,” he says.

But his father, an avid rugby player, wanted to push the young Luvo into the sport. His pace made him a lightning-quick winger, but his performances were begrudging. Unsurprisingly he drifted back towards the track. His father’s opinion manifested as an empty seat during his weekly meets.

A gifted athlete, Luvo hit his stride in Middle School when he qualified for a long jump event in Stellenbosch. For the runner, the switch was inevitable. He thrived on those do-or-die moments. “I just fell in love with the sport. It was something that really knocked on my heart,” he says. “You don’t have to rely on someone else, or have someone get in your way. You are in control of your destiny.” His passion and his ability shone through on the day as the athlete qualified for the Boland team. From there, it was time to up the ante. Every weekend he was taking part in a new competition and dominating. Seniors with not only years but inches of height on the prodigy struggled to match his distances. The imprint of his frame splayed in the sand became an unreachable benchmark for his competitors.
In 2009, coach Mario Smith spotted the jumper. He was amazed. He would later tell reporters that Luvo’s technique was perfect. That it rivalled that of pros who had been jumping for a decade. Within days he had taken Luvo under his wing, and later that year the athlete picked up a gold medal at the junior championships. The speed at which Luvo approached the sun was breakneck. A rapid rise to the top left him stunned. Growing up in the township, the chance of breaking free, of leaving those dusty streets behind him – to break out and send ripples across the world – was almost unheard of. And here he was at 19, landing on the moon. His first thought: “I can finally give my family the life they’ve always wanted.”

The Fall
It wasn’t that win that broke the athlete. His fall from grace began unceremoniously with a fifth-place finish at a world series in Japan in 2011. The money started flowing in and his only financial lesson began and ended with: “If you’ve got money, you spend it.” He did give his mother some money, but not much.  The rest was funnelled into the party fund – which included booze, binges and, soon, even an influx  of illegal substances. “I don’t even know why I did it. I was just being a kid, experiencing life, you know?” he says. But one payout couldn’t sustain his new lifestyle, and by the time the well of cash dried out he was left stranded – and hooked on illegal substances.

What followed in the next few years were a series of low moments. Each moment managing to plunge the athlete even deeper into chaos. His driven performance on the track morphed into a galvanised pursuit for that next fix. He woke up every morning in the throes of his craving, and he would do anything to still the creeping dread of sobriety. He was almost arrested, shot, and stabbed as he turned to robbery and stealing. A former hero, he quickly became a menace in his community. He was one of the skollies. His friends in the athletic fraternity, such as Ryk Neethling and his coach, staged multiple interventions. And he sat there and nodded in the lounge of his family’s small home in the township as they pleaded, shouted, implored him to get help. And as soon as he heard their car roar into life, he would be back to planning his next escapade, his next step deeper into the hole he was digging for himself. In 2012, Luvo tested positive for a non-performance illegal substance. He was banned from the sport for 18 months. His coach stood by him. But Luvo felt nothing. “At the time I was happy when I got banned. I told myself, Luvo, you’ve got two more years where you can just keep using.” Luvo Manyonga’s imprint in the sand was no longer  a benchmark. It was no longer a statement to the world. It was just a spot in a dusty street, somewhere he had found himself after another bender.

The Fight
When Luvo’s coach died in a car crash, that was the first wake-up call. Their relationship had been frayed and Smith had been on his way to the township to try to patch things up and implore the athlete once again to seek help. “He was like a father to me,” Luvo says. “Here I was sitting, and he was dead. My life was just a joke.” He didn’t check into rehab that day. He didn’t even attend his coach’s memorial. He kept using. But every morning he woke up and told himself: “Luvo, you have to wake up, man – you have to go ask for help.” He knew he was killing himself, and his life turned into an internal war of attrition, new battlefields opening up between benders. In 2014 he was a man lying at death’s door, and it was fight or flight. He chose both, booking a ticket to Pretoria and checking himself into
the High Performance Centre. Luvo stayed there for almost two months, where he learnt from staff and friends, such as Neethling and strength and conditioning coach John McGrath, what  it meant to be a man. “Kicking the substances wasn’t that hard,” he says. “The people who surrounded me wanted me to be successful – and I just fed off their energy.” Slowly, he brought himself back from the dead. He started jumping again, finding his stride. And in a flash he was standing in a crowded stadium in Rio, ready to make his first jump.

The Win
“Everything I had. I had to bring it all,” says Luvo. That was the only option as he tackled his first jump. This was his chance to rewrite the story, to undo the wrongs of four years, to redefine his high. He had spent months regaining the trust of friends, family and sporting pundits, of people who had just months earlier said, “Luvo Manyonga? Who is he? He doesn’t exist anymore,” he says. 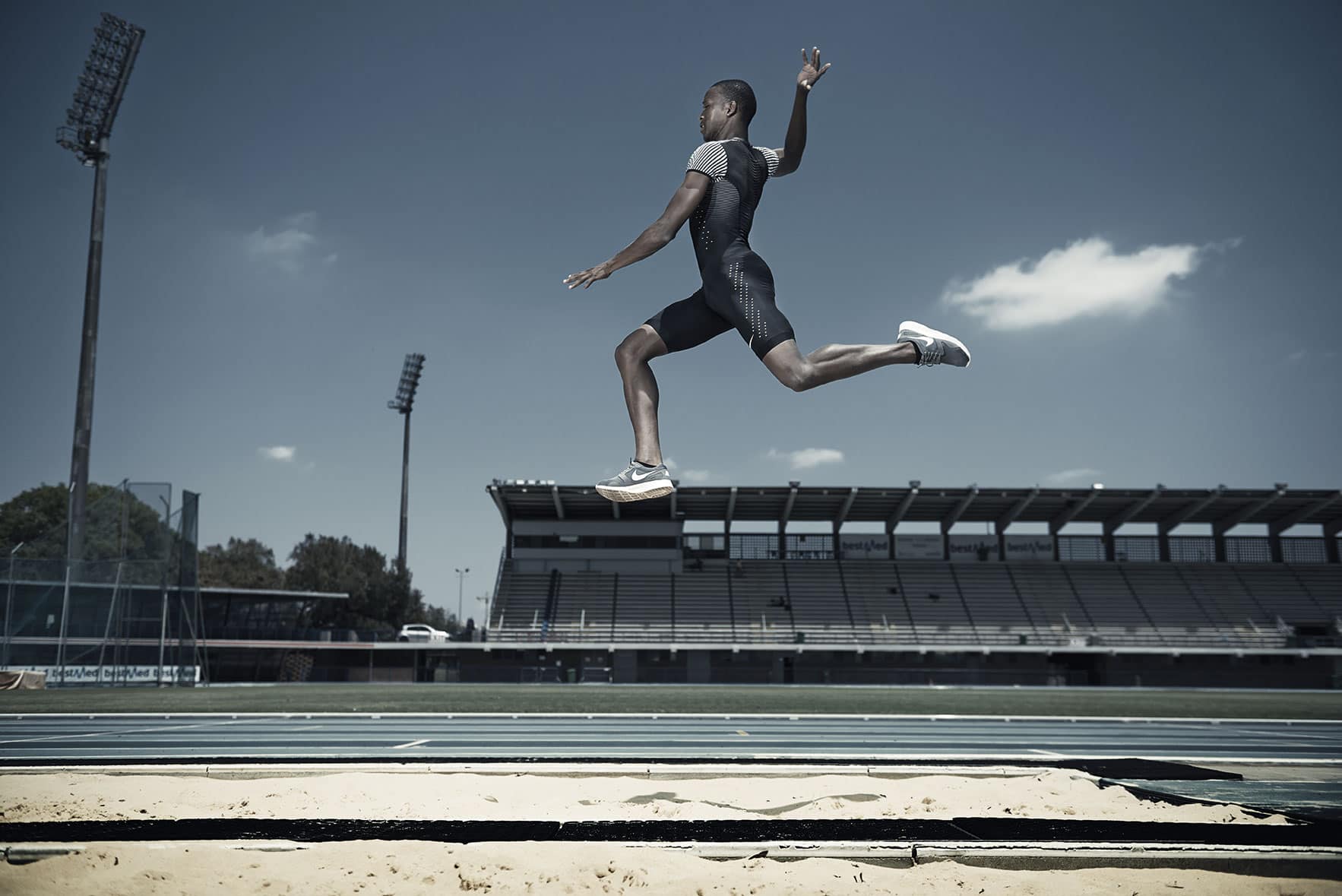 In the final, his first jump was decent, but not worthy of a podium finish on the world stage. He followed it up with two no-jumps, the sand stinging his face, the impact of his body against the hard grains rattling through him. For those on the sidelines, it looked like the jumper was cracking under pressure, falling apart. He says now that those false starts were part of a tactical ploy to pace himself and build up to the perfect leap. But that would be impossible, to have the luxury  of a little gamesmanship at the Olympics, of all places. Wouldn’t it?  His fifth attempt goes exactly as he had planned, and commentators have the chance, mid-jump, to remark that it’s a big one: 8.37m, a personal best, and enough to take the lead. “I had known going into the Olympics that I would win a medal. It didn’t matter what colour it was, I didn’t care. I just knew I could do it,” he says. Staring at his score, he felt vindicated. But with a no-jump on his final attempt, his destiny was now in someone else’s hands: Jeff Henderson, an American jumper known for pulling off miracles with just centimetres to spare.With his jump, another spray of sand, he delivered, pipping the South African to take gold. “When I felt that medal around my neck, I imagined that my coach, Mario, that he was somewhere smiling,” he says. “This is what you always wanted for me, I even looked up to make sure he could see me as I told him: there’s still more coming.” Luvo is now out to break an Olympic record that has been left untouched since 1968 when Bob Beamon leaped over 8.90m of sand.

“I’m taking this to another level. It’s time to rewrite history,” says Luvo. “That record is going down.”