The Rise Of Surf Photography

The recent convergence of camera technologies has propelled the action sports film genre to new heights.

Enter the explosion of camera footage from above the subject. Suped-up model helicopter drones can track surfer all the way down the reef, the mottled hues of the coral beneath him adding to a visual feast. They can capture the downhill MTBer dropping down virtual cliffs with awe-inspiring results.

We get crazy, wide-angled shots panning back as a surfer gets barrelled off his nut towards you, or the MTB dude lands a ginormous table top jump. The drone is a millions times steadier than hand-held cam shooting from a boat yawing in an unduluting sea, or a 4×4 panning along a jeep track.

The quality of material finding its way onto the Web beggars belief at times. The learning curve in drone flying is over it seems, although it remains banned in South Africa.

But never mind the drone. There’s also a monumental leap in quality. Filmmakers can shoot the action with ridiculous 1,000 frames-a-second technology with video cameras like the Phantom Flex. Okay you need a few bucks. They start at R500,000 a pop.

And then, just when you thought you had the footage for the sickest Youtube movie, cut from the wide view to point-of-view shots INSIDE the barrel or from the perspective of the MTB jumper by action cams such as the GoPro. You can film your movie from a multiple of brandnew angles and speeds unheard of before: along the route, inside and … on top.

This variety of options as opened the floodgates for the Wavescape festival. Films have never been so high-end. Youtube and Vimeo brim with breathtaking clips almost daily. 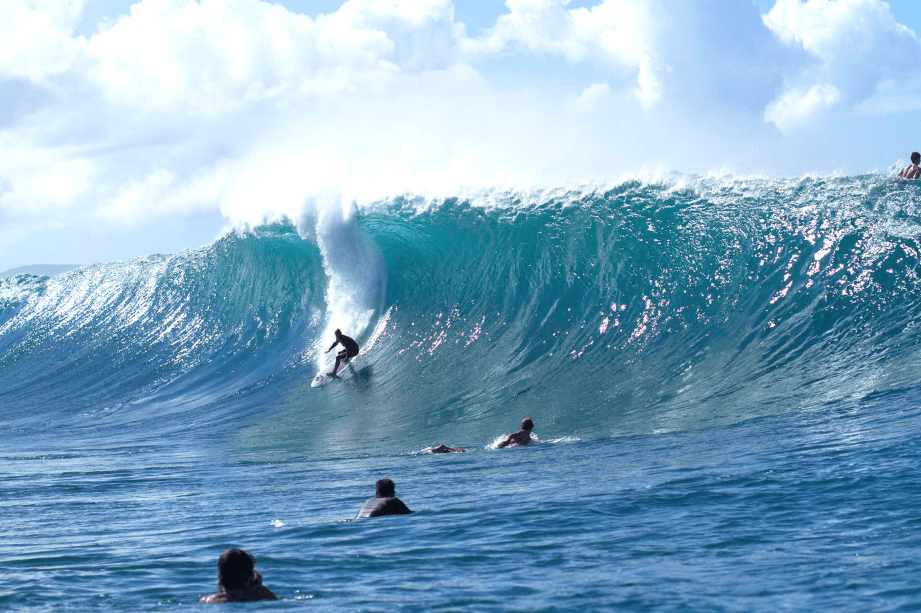 In the latest surfing films, a favourite new shot is the aerial pan by drones. It’s the flavour of the month right now – a fresh departure from the land-based camera tracking a surfer’s ride. Good composition is hard to sustain without multiple cameras or other tricks, such as driving along the beach. There’ve been some great shots of Skeleton Bay from 4x4s speeding down the beach at up to 80km/h to keep up with those freight train sand-eaters growling down the sand spit meters from shore.

The ubiquitious action cam, which is so portable and affordable, simply adds a cherry on the top by sucking you right into the viewpoint of the subject. The visual narrative goes from third to first person with lightning alacrity. The future is bright. Little wonder that retail brands are diversifying into content production, such as Red Bull into Red Bull Media House.

A whole industry has sprung up overnight. Athletes such as Danny MaCaskill, the free riding pinup boy or trail riding, can concentrate on content generation rather than events.

Slo-mo aerial pans of mottled coral and carving surfers are a far cry from those clunky, grainy Super 8mm shots from the 1960s. Wes Brown, son of Bruce Brown who discovered the surf of Cape St Francis in Endless Summer, once told me that the ride at Bruces Beauties was so long that his dad’s Super 8mm cartridge couldn’t capture the whole ride. By the way, a Super 8 cartridge lasted about 2.5 minutes at 24 frames per second (fps).

That’s a far cry from the Phantom 4K Flex. This heavy calibre beast achieves 2,570 fps at 1920 x 1080 resolution. The camera has its own RAM in addition to an inserted “Memory Magazine”. Packed with 512 gigabytes, loading this machine is like loading an M60 heavy machine gun. My camera is a peashooter, and my 16gig memory card pellets in a BB gun.

The future of the adrenaline rush never looked so good.

NOW WATCH THIS!
Slow-mo Phantom clip by Chris Bryan
Some drone footage, from the movie I had Too much to Dream last night
GoPro footage, Benji Brand in Namibia
A mixture

* Story by Spike, the big-kahuna at Wavescape. Catch the annual @WavescapeSA Festival in Cape Town between 29 November and 14 December. #wavescapefestival is presented by Pick n Pay, and supported by the Save Our Seas Foundation, WWF-SASSI, Banana Peel, Jack Black Beer, Zigzag and Men’s Health.