Is this the saddest farewell of all time?

26-year-old Jack Wilshere will leave Arsenal come the end of June. With new manager Unai Emery, it seems the old Arsenal fabric under Arsene Wenger is needed no more. This comes after the news that first-team goalkeeping coach Jens Lehman, has left the club after only a year.

“It was a good experience working with the players as one of the assistant-coaches. But the attitude from our 2004-group is not needed there anymore,” the Arsenal legend tweeted.

Dear #Arsenal Fans , I am sorry to leave the club after only one year again. It was a good experience working with the players as one of the assistant-coaches. But the attitude from our 2004-group is not needed there anymore.

Lehman referred to Arsenal’s 2004 Invincibles season, where the team went the season unbeaten. The 48-year-old had ignited an old flame when coming back to the club last season, with Jack Wilshere playing 37 games for the club, giving the Emirates crowd hope in a season ridden with misfortune and despair.

But according to Wilshere, who made his Gunners debut in 2008, he was left without a choice. With further dedication to the club coming with personal sacrifice.

“My intention throughout these [contract] discussions has always been to remain an Arsenal player. I have been on the books at Arsenal for 17 years and have always felt part of the fabric of the club,” he said in a statement on social media. “Such was my desire to stay that I had in fact recently agreed to sign a financially reduced contract in order to commit my future to the club.

Related: Africa’s Shot At The Trophy: Who Will Do Best In Russia

“However, following my meeting with the new manager I was made aware that although the reduced contract offer remained, it was made clear to me that my playing time would be significantly reduced should I decide to stay.”

Jack, who made 197 appearances for the club released the statement along with a touching video on his best memories at the club on social media. Within minutes, players from around the globe came out in support of the baller – with the likes of Chelsea’s Cesc Fabregas, fellow teammates Alexandre Lacazette, Hector Bellerin, Danny Welbeck – commenting from Russia, as well as Santi Carzola – who jokingly asked Jack to come with him, after his contract was not renewed with the club. 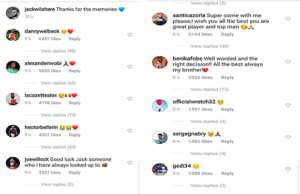 Other stars who left their messages of support  include Reiss Nelson, Kieran Gibbs, Joe Willock, Serge Gnabry and Alexander Iwobi. 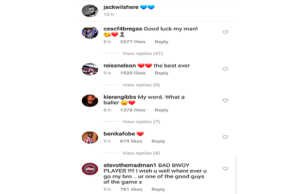 A new job and exciting challenge ahead for Wilshere. Just like anyone, he may encounter high stress levels with his next job and team. If you’re going through the same (stress, not joining a pro-football team), check out what the experts told us on how to remain calm. And for Jack, here’s 24 ways to smile through life’s stress.