I Was In A Motorbike Accident, Going To Gym Gave Me My Life Back

Training was good for Sandile Mkhize's mental and physical health

Photography supplied by Wings for Life

“Growing up, my ambitions were always to be somewhat successful,” says 31-year-old Sandile Mkhize. “I had no idea what success meant at the time, but it was always centred around the shallow idea of having a lot of money.”

After 26 January 2013, Sandile Mkhize’s definition of success changed. On that fateful day in January he climbed on his motorbike to meet up with some friends for breakfast. But he didn’t make it that far. As he turned a corner he lost control of his rear wheel. After sliding on gravel along the road, Sandile crashed into something. “I don’t know what I hit,” he explains. “I woke up after blacking out surrounded by paramedics.”

Related: How Alwyn Uys Turned A Near-Fatal Car Crash Into His Biggest Opportunity

The entrepreneur was rushed to the hospital. Doctors performed multiple surgeries to repair the damage he incurred in the accident. Along with breaking his spine in three places, Sandile’s body didn’t react well to the surgeries. “I literally had every complication from having to need multiple surgeries for skin grafts, bone repairment and bone removal. I also struggled with pressure sores.”

11 months after the accident Sandile Mkhize went to rehab for the first time. “Technically, I’m still healing now, because I continue to find better ways to do things, but it took me close to two years to become a functioning human and go home.”

I represented central Gauteng in Basketball and played Craven Week as a youngster.

In 2015, the entrepreneur headed back to the gym for the first time. Prior to his accident, Sandile was quite physically active. He played everything from basketball, soccer, cricket and rugby. “I represented central Gauteng in Basketball and played Craven Week as a youngster.” In some way, going back to the gym compensated for the his inability to play sport. But aside from longing to be physically active again, training was good for both his physical and mental health. “I don’t have great circulation, as I can’t walk. Training helps with my blood flow. And for my mental health, going to the gym has really cured my depression and helped make the world a little colourful.”

Related: How To Build A Home Gym For Less Than The Cost Of A Gym Membership

Sandile trains twice or thrice a week. While he would like to vary his training regimen, most gyms are inaccessible to wheelchair users. “They don’t have adaptive equipment. So I tend to find exercises that work within those constraints.” For cardio, he does battle rope exercises. “It’s fun, but it can become frustrating because it’s the only thing I can do.” Along with his cardio, Sandile Mkhize does exercise that work his upper body completing splits that focus on his chest and biceps and then the next day doing back and triceps or mixing them up.

In 2016, the entrepreneur entered the Wings for Life race. The event aims to raise awareness and funding for people with spinal cord injuries. “I entered almost by accident. My physio at the time brought it up and I thought ‘well, I’ve isolated all this time, why not get into the public and see what happens’. It was the first race he entered into after his accident. “The race was amazing. I bumped into people who would become my colleagues and the community there was just amazing. I loved the experience and it was great to be there with my friends,” he says.

Related: What Is The Wings For Life World Run?

That year Sandile managed to complete 9.17 kms before the Wings for Life car caught him. Enthralled by his experience he went back the next year, and has completed it every year since, with his time jumping to 15.04 kms in 2017. 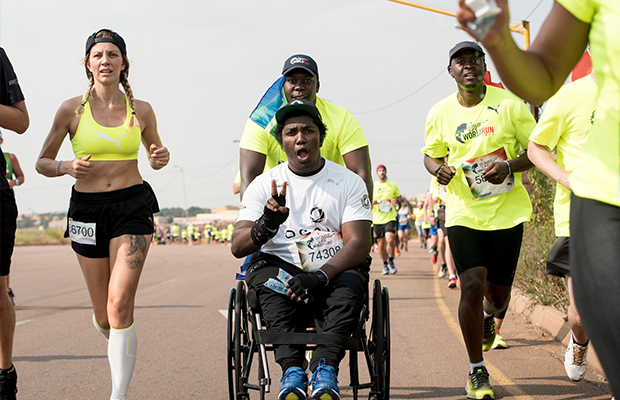 Other than enjoying the race, Sandile is a firm believer in the purpose of the race. “I’m passionate about finding a cure for spinal cord injuries. It would be great to find a way for kids to not have to experience the same kind of trauma that I had to go through.”

And while Sandile Mkhize has made peace with his situation, it took him a long time to get to where he is today. “It’s been a rollercoaster. There was a time where I thought I could tackle anything. So being in a wheelchair was just another thing I had to tackle.” But then Sandile became heavily depressed. “I wanted to give up, re-inventing myself wasn’t as easy as what I thought it would be. I thought my disability was a negative thing. But then I decided to make life worth living. I also didn’t want my mom to have to bury me, so ending everything wasn’t an option anymore.”

Now the 31-year-old runs an online education platform and is a director of an NPO that tries to raise awareness about wheelchair accessibility. “We try to find areas where there are persons with disabilities who don’t have access to basic things. We focus on providing beach access to wheelchair. If we find a kid who can’t afford a wheelchair we try to raise money for that and we do that through many initiatives.”

Once I was confronted with my own mortality, it made me investigate my life more and find out what my purpose is.

Sandile’s accident made him more self-aware. It forced him to take a long look at the life he was living and his motivation behind doing certain things. “Once I was confronted with my own mortality, it made me investigate my life more and find out what my purpose is. I would have to say that I find happiness in being useful and helping. That seems to make life worth living. My accident made me less of an asshole than what I was before. A lot of things came easy to me before the accident and having to struggle for the basics really put things into perspective for me.”

Although Wings for Life has cancelled all their flagship events, you can still do your own run on 3 May via the app. Get more info here.