Running For His Life: The Survivor (Better Man)

When commodities trader Craig Banks was diagnosed with an aggressive form of cancer, his fitness and competitive spirit helped him nail the ultimate race

Craig banks was 25 and sensed life was just getting started. He’d left Cape Town to join a few mates in the UK in 2002, where he’d bagged his dream job with an oil trading company. But a few months in, everything started going wrong. First, the Dutch visa he needed to continue working with that company didn’t come through – then, before departing from Cape Town, his visa-requisite chest X-ray picked up a small node on his neck.

His GP advised Craig to contact him if it hadn’t disappeared within a month. “I chose to ignore him,” says Craig, who is now 40. “I started feeling worse and worse, and the node in my neck was getting bigger. It would shrink down, then grow again – I thought it was stress-related.” He constantly felt itchy; then came unsettling night sweats: he’d wake up three times a night, drenched, and had to keep a pile of towels beside his bed. Eventually the node pressed on his vocal chords and he began to cough. “I was very fit before I went – I’d played lots of cricket and rugby, run countless halfmarathons, surf-skiied and surfed – so I didn’t really believe I was ill.” But when the job fell through after 10 months, Craig flew home to Cape Town. His mother burst into tears at the sight of him.

Falling Apart
After a scan and biopsy at Constantiaberg Mediclinic, haematologist Professor Peter Jacobs diagnosed stage four lymphoma: cancer of the lymph nodes. Very advanced, it had spread to his neck, chest and abdomen. “Prof said, ‘Craig, you’re very sick. We can make you better but we’re going to make you a lot more sick in order to make you better. And you’ve got to go to the sperm bank because you’ll never have kids naturally,’” he recalls. Eight rounds of chemotherapy over 10 months flicked Craig’s crazy switch. “After that, I just went flat out at life. I thought life owed me something; I thought I was invincible.” He threw himself into running, triathlons and 6 Down touch rugby at a local rugby club. It was there that he met his wife-to-be, Mandy, a biokineticist, while playing in a mixed social side. “I’d play in the main league, then run across and play in another men’s league, then run across and play in the mixed league. Then we’d drink all night. It was a crazy time. I felt like the solitary survivor of an aeroplane crash, as most of the guys I’d had chemo with in hospital had died.” A few months later, he relapsed.

Professor Jacobs recommended an autologous transplant: Craig’s bone marrow stem cells, which produce blood cells, were collected before chemotherapy in order to remain undamaged, and returned to him afterwards, but his recovery was slow. However, in the 18 months’ reprieve after the transplant, he and Mandy did the Coronation Double Century cycle race, XTERRA Off-Road Triathlon, and Ironman with friends, raising almost R250 000 for Professor Jacobs’s haematology trust: “It was an amazing event. It took me forever – 15-and-a-half hours. My wife did 12-and-a-half. She killed us all,” Craig laughs. But his body was taking strain. Two weeks after Ironman, Craig was treated for tuberculosis. Four months later they got married, but two days after he and Mandy had returned from honeymoon, he relapsed again. “Then my world really started falling apart again. Prof said my body lacked the antibodies to fight cancer, so a bone marrow transplant was the only thing they could do.” He needed a donor, and fast. In the build-up to the transplant, the couple had been for IVF treatment, and Mandy was three months pregnant when Craig was admitted to hospital. “It was very difficult for her,” he says. “I still had a lot to live for, so it was easy for me to fight, to make the decision to keep going.” That said, Mandy had been resilient enough to start dating a guy with cancer, and her calm strength stabilised Craig, helping him push on. “She’s very strong mentally – an incredible woman,” he says.

“I felt like the solitary survivor of an aeroplane crash, as most of the guys I’d had chemo with in hospital had died.”

Finding a Match
After a test showed Craig’s brother wasn’t a tissue match, the South African Bone Marrow Registry (SABMR), co-founded by Professor Jacobs, began tracking down an unrelated donor. With the chances of finding a match at one in 100 000, it seemed miraculous that a donor was found in England within four months. After his transplant, Craig was subsequently hospitalised for internal chickenpox and shingles but returned home two days before his daughter Noa was born.

Yet six months later, a mark was found on Craig’s lungs, and again the biopsy was positive. “It was a horrendous time in the family: my mom was being treated for breast cancer; I’d been through pretty much all the regimes of drugs available. I told Prof, ‘Get me anything. Just keep the cancer under control.’ The stress really got to us. I was down from 78kg, my weight during Ironman, to 52kg. I was skin and bone. You could see in people’s eyes that they had written me off.” 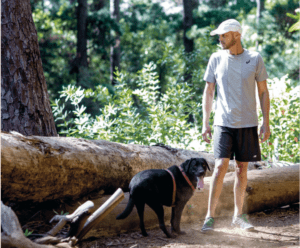 Professor Jacobs put Craig on an experimental treatment programme involving six rounds of chemotherapy, but the third round almost killed him. He’d arrived at hospital feeling ill, and collapsed. “I was rushed up to ICU. I’d got septicaemia and they caught it just in time. They said if I’d arrived half an hour later it would have been touch and go. I told Prof, “I can’t do this. I can’t get through another round.” He said, ‘That’s fine. Take a break.’” When Craig was discharged, his scan was clear. Three months went by: still clear. Three months became six. Six months became eight years.

“At one stage, if I held my IV line against my chest, I could run downhill. I could run 500m.”

The Fit Factor
“A big reason I managed to get through my treatment was because I was fit going into it, and stayed as fit as I could during the treatment,” says Craig. “Forcing yourself to get up and go for a walk changes your whole perspective.” During his first transplant, he measured the transplant unit: 44 paces. He’d calculate how many kilometres he’d walked during the day and challenge himself to go further. “I’d feel I’d accomplished something. I’d tell myself, ‘Yes, I’m in the unit – but I’ve walked a kilometre today, pushing my bloody drip stand!” During chemo, he’d take longer walks around the block inside the hospital, or in the grounds, or up and down the stairs. “At one stage, if I held my intravenous line hard against my chest, I could run downhill. I could run 500 metres. If Prof had found out, he would have killed me!”

Professor Jacobs himself inspired Craig. “During my first transplant I went through a really rough patch and the nursing staff had to phone Prof at 4.30am – he was in the hospital gym, running on the treadmill,” he grins. Jacobs died in 2013 at age 79, and left Craig his set of free weights. “If I’m feeling a bit lazy, I always ask myself, ‘What would Prof do?’ and more often than not I’ll get myself going as I know he’d train, without question.”

Racking Up the Blessings
Craig’s hair may not have grown back after chemo, but clinically he has a clean bill of health. He and Mandy and the kids – Noa, seven, Grace, four, and Hayden, 18 months – are a typically outdoorsy Cape Town family who walk and cycle on the mountain with their dogs, and regularly head to the beach to swim and surf. “We’re very blessed. We live normal, stressfree lives,” says Craig. His mother has been clear of cancer for eight years too. Craig is involved with Prof Jacobs’ haematological trust: his friend Nic Misplon ran the 2016 Comrades Marathon and raised R40 000 for SABMR. Since his recovery, Craig has run three Old Mutual Two Oceans Half Marathons, but has found sustained activity strains his immune system, bringing a slew of colds and flu. He’s now working with a homeopath to bolster his immunity, focusing on 30- to 40-minute runs to up his fitness, and is on a light weight-lifting programme to gain muscle mass. His dream is to run the Old Mutual Two Oceans Ultra Marathon – Mandy is training to run it for a third time this year – and complete another full XTERRA Triathlon. “All the chemo melted away a lifetime of physical activity, so I need to build up my strength before I look at doing another long-distance event.”

While Craig and Mandy were in the UK for the 2015 Rugby World Cup, his donor, Rebecca, and her husband agreed to meet them for dinner. “Nothing can prepare you for a moment like that,” says Craig.

“One of my bone marrow markers was slightly abnormal, and Rebecca had that exact abnormality. So we’re a perfect match, but we live on opposite sides of the world. The impact of what she’d done struck home when we met. It was an incredible experience.”