Run the Gauntlet: Road To The 2016 Paralympic Games

PITY IS A FOUR-LETTER WORD. AN EMOTION ENGRAVED INTO unforgotten memories of those playground days where curious kids would beg and plead to see his maimed leg and clubfoot but recoil as he pulled off his shoe. They laughed nervously; they were disgusted, and then there was just sympathy. A thick atmosphere of childish condolence that clipped at the Mpumelelo Mhlongo’s sense of being.

“Those looks – that distance people left around me – I started to associate all of that with pity,” says the Paralympian.

Those formative years could’ve pushed Mpumelelo to the fringes, gutting his childhood of fond memories frolicking with friends. But instead he took to the field. He played soccer with the older kids, he spent his evenings chasing up the hill outside his house. He wanted to be faster, he wanted to get stronger, and he wanted to be better. Because in those few moments he is winning, he isn’t a man with a disability. He isn’t the kid with the maimed leg. He isn’t defined by his condition. “It’s the one time I feel like nobody is pitying me. I am as far
removed from pity as I can possibly be. All that’s defining me in that moment is what I can achieve.”

And now he’s lining up the biggest achievement of them all: gold at the Rio 2016 Paralympic Games.

MPUMELELO IS A JUMPER BY TRADE, but he’s branching out. While he’s not overly confident in his sprinting abilities, his coach has other ideas. “Yeah, we’ll have to see how that one works out,” he laughs. The UCT chemical engineering student splits his time between burying himself in his books and putting in work on the track. And while he has performed at a top level since qualifying as a Paralympic athlete, he’s stayed humble.

“You know, I’ve been fortunate. Fortunate to have the family I have, to know the people I know,” he says. The young athlete was born in Klaarwater. Never heard of it? Don’t worry, Mpumelelo isn’t offended. The tiny township barely makes it onto the map of KwaZulu-Natal.

“Hey, it’s where I experienced the best childhood I could’ve ever asked for,” he says.

Born with a clubfoot and amniotic band syndrome – a condition which cut off bloodflow to his leg, maiming it permanently – Mpumelelo was under the knife before he even uttered his first word. While urgent surgery didn’t restore movement back to his leg, it did save him from having it amputated. It was a tough call for his mom, but she would rather her son had all his limbs, even if one of them didn’t work properly.

Whether it was the trauma of the operating theatre or the damage to his appendages, the kid was a slow-starter. While his home, filled with immediate and extended family, was a constant hive of activity, he sat quiet and motionless in the corner.

“I didn’t speak or walk for the first six years of my life,” he says. “I spent that time sitting in one place and being fed.” His grandmother (“she’s brutally honest”) had told him bluntly that he would always be the family’s favourite, but that nobody expected anything from him. All he had to do was survive.

BUT SUDDENLY, FROM A SEEMINGLY HIDDEN PLACE, HE discovered his momentum. He took his first step, then spoke his first word. He sprang from his paralysis, transformed into an energetic youngster, eager to explore a world surrounding his small home. Mpumelelo began clambering up the hill outside his house, quickening his pace from a stumbling jaunt to a slow jog. There was an immediate freedom for the once-static youngster. Having spent six years locked in one place, he felt powerful with the dirt under his bare feet. Doctors had said he would never walk – but within that same year, he was already playing soccer with skill and agility.

He’s never taken keeping active for granted. In his formative years his time on the pitch helped him connect with the other children, straddling the gap created by his leg’s strange appearance with sweat and grass stains. Their pity dissolved into playfulness as soon as he stepped onto the pitch. That distance? It was bridged by four posts and a rubber thump as he lofted the football expertly into the air.

“I ran a lot in those early days,” he says. “Being on my feet made me feel alive. I was always looking for some new way to test my body, another way to prove I was faster, stronger or better than the other boys.” One day, like every other, he was clearing new heights. Mrs. White, a veteran school teacher, watched the youngster fly through the air, turning obstacles from tricky to trivial, each jump going higher and higher. He advanced from tree stumps to toppled bins, from concrete steps to stacked boxes. An idea hatched in the teacher’s head, and a few minutes later she was encouraging him to tackle a discipline Mpumelelo had never heard of, let alone considered: high jump.

“It was overwhelming at first,” he laughs. “I didn’t want to be known as a teacher’s pet, but in retrospect that was something incredible special for me as an athlete. I can’t put into words how much she has meant to me over the years.” 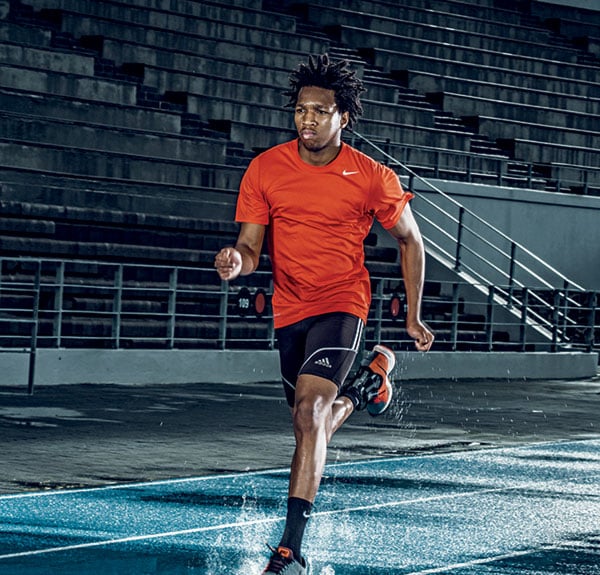 BY THE END OF PRIMARY SCHOOL, MPUMELELO, EGGED ON by his family of former runners and sprinters and his teacher turned-mentor, was competing in provincial trials, his passion for the high jump burning hot. But for all his achievements Mpumelelo’s passion sputtered out as he grew older.

“You know, life happens. You pursue other things.”

At university that meant parties, drinking and skipping classes. He was trying to find out who he was and he thought that meant making connections, giving his life context within a widening circle of acquaintances. He was trying to discover himself, he says, but his marks were suffering and ultimately, and instead of uncovering the secret code – that elusive meaning of life – his grades tanked, he felt burnt out and lost.

The problem? “I’d left behind those sports that had once meant the world to me as a kid. That sense of competition, the feeling of winning,” he says. It was just a thought at the back of his mind. But the realisation truly dawned when he went home to visit his mom and she asked him what he could tell her about Cape Town.

“I was like, the places I know about, you really don’t want to know about,” he says.

Not for the first time, her invaluable perspective allowed him to see a new path. She didn’t tell him off, or go on a tirade over his skipped classes and failed courses. She suggested, she encouraged – her warm words helped him mark out his next step, just like they coaxed out his first.

When he returned to university, he decided to unearth his passion for sport. It took a while to get the engines running, but quickly he was competing against able-bodied athletes, and most importantly, winning. The varsity paper covered his exploits, marvelling at this young man who emerged from nowhere to become one of the campus’s sporting heavyweights: the chemical engineer with the blueprint to overcome his disability. Strangely enough, it was only in his third year that he discovered he could register to be classified for disability sport. Encouraged by a fellow athlete the process opened the gates to the road to Rio, and he jumped at the opportunity.

IN THE UPCOMING PARALYMPICS, MPUMELELO WILL COMPETE as part of the T44 category – reserved for athletes who have a single below-the-knee amputation or can walk with moderately reduced function in one or both legs. He’s confident about taking on the familiar battleground of high jump, but sprinting?

“Those guys are so fast, I feel out of my element,” he says with a laidback sigh and a smile. His emotions are scattered. One moment he’s training, he’s gliding over the bar and tearing along the track. The next? He’s doubting he’ll even make it over the starting line. But he’s staying sane. “Somehow,” he says.

His secret: his varsity work. Tough courses are a major distraction, and keeping his grades is to him just as important as taking a medal on the world stage. Which also may be a reality.

Pundits have labelled the young athlete a serious medal contender – remember, he just recently started competing at an elite level – but Mpumelelo isn’t worried that if he missteps that

his loss will be met with pity. Quite the opposite.“There’s disappointment, definitely. But, there’s also this real feeling of camaraderie among Paralympians. They’re your biggest supporters. Well, except maybe his supporters back at home.

He’s the boy from Klaarwater who was never supposed to walk. And now he’s a medal contender who could sprint, jump or glide to a spot on the podium.

“I’m excited to go out there and prove myself against the best of the best,” he says. “But more importantly, I’m excited for what competing has brought back into my life. I feel re-energised, I feel fulfilled, and I feel like I’m right back where I belong.”

And most importantly, he doesn’t feel pitied. He feels like a man in his own right, someone who has forged his destiny on ability, not disability. Those leering looks, the curiosity, sympathy and disgust of childhood is a distant memory. He’s run the gauntlet and come out sprinting on the other side