This is our dream team of Rugby stars who tackled our cover page and crushed it. We nearly have enough to make a full starting lineup.

These rugby players and game-changers know what it takes to be MH fit. They’ve set the bar high for future cover guys. Use their professional secrets from the past decade to lift your fitness game. 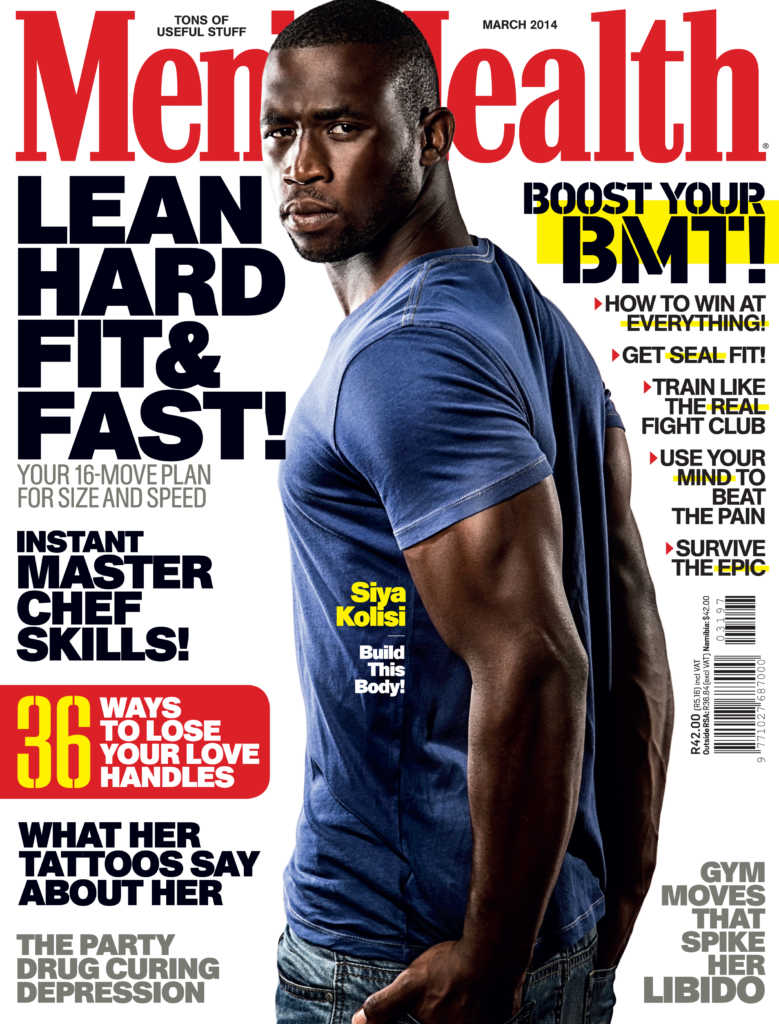 Siya Kolisi is the embodiment of explosivity.  “Siya is blessed with superior athleticism,” says Stormers strength and conditioning coach Stephan du Toit. The Springbok captain is a mesomorph, Du Toit explains, which means he has a lean body mass and can increase his muscle mass over a much shorter period than the average athlete.

He posed for our front cover back in 2014 and gave some of his workout secrets as well. 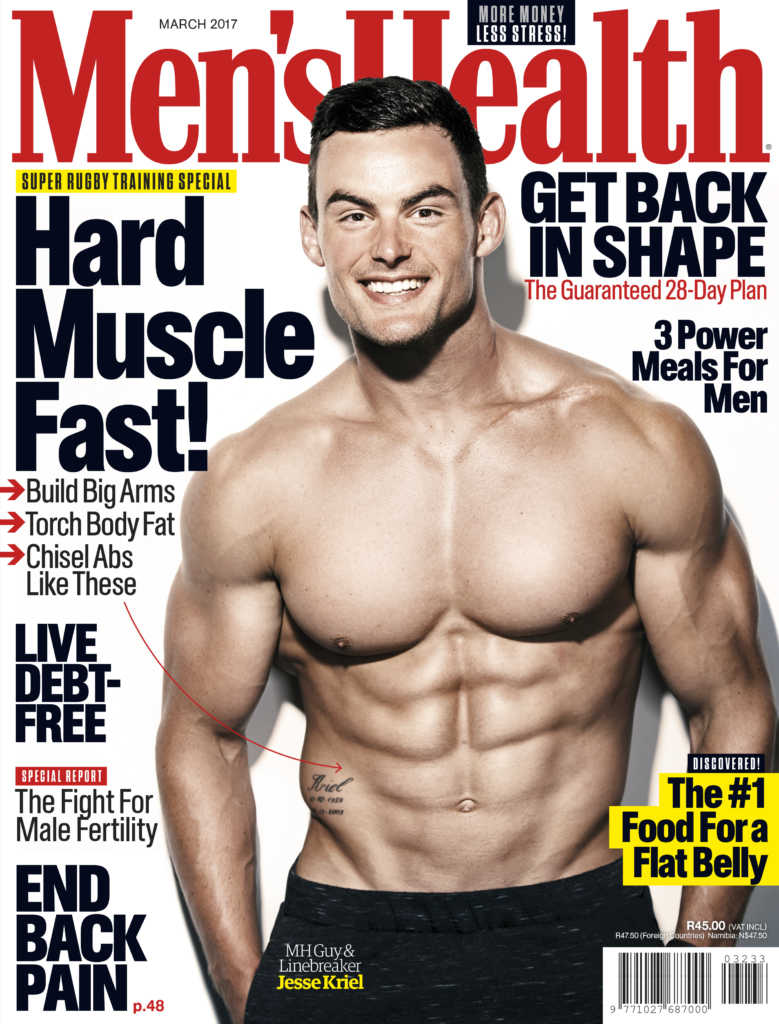 “The more water I keep in my fridge, the more I tend to drink.”

Backline beast Jesse Kriel showed off his killer six-pack in our March issue of 2017. He, along with Jaco Kriel and Sergeal Petersen revealed how you can stay Super Rugby fit with this weekly routine.

He also mentioned the importance of stocking enough water. 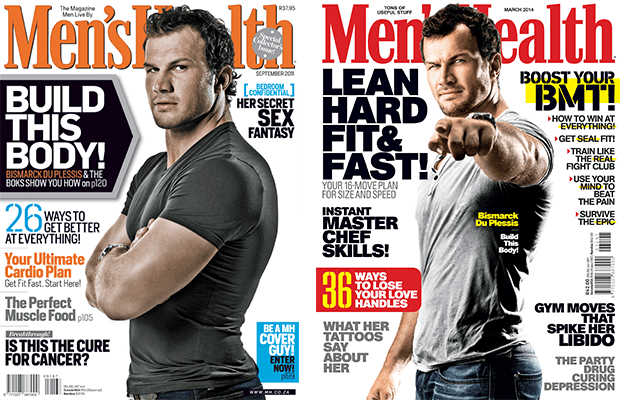 Bismarck du Plessis plays with a force that leaves opponents shaking their heads after games, recounting how they have just been out- scrummed, out-driven and out-tackled. The 34-year old, who currently plays for Montpellier in the French Top 14, was on our cover twice – in 2011, with four other Springboks and three years later in the March 2014 issue. 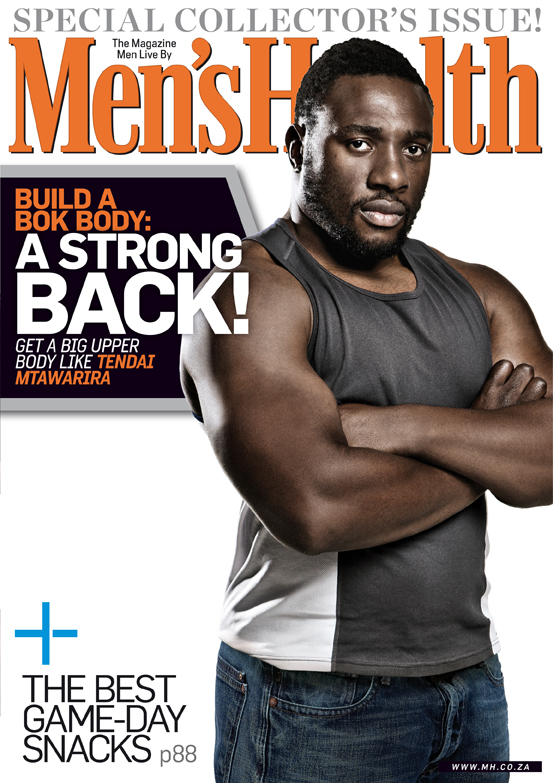 “It’s important that I make sure I’m as strong as possible in my back and upper body.”

Tendai ‘Beast’ Mtawarira stood strong in our September 2011 issue and told us how he builds his back muscles.

In the scrum, Mtawarira is front and centre in a 900kg, eight-man pack of forwards. “That means I take a lot of weight on my back,” he says, “so it’s important that I make sure I’m as strong as possible in my back and upper body.” So how does he build that strength? “Squats,” he says. “Lots and lots of squats. I’ll also do dead lifts to give my body a bit of variation – but mostly, I’m performing squats.”

Related: Build A Strong Back Like Tendai ‘Beast’ Mtawarira 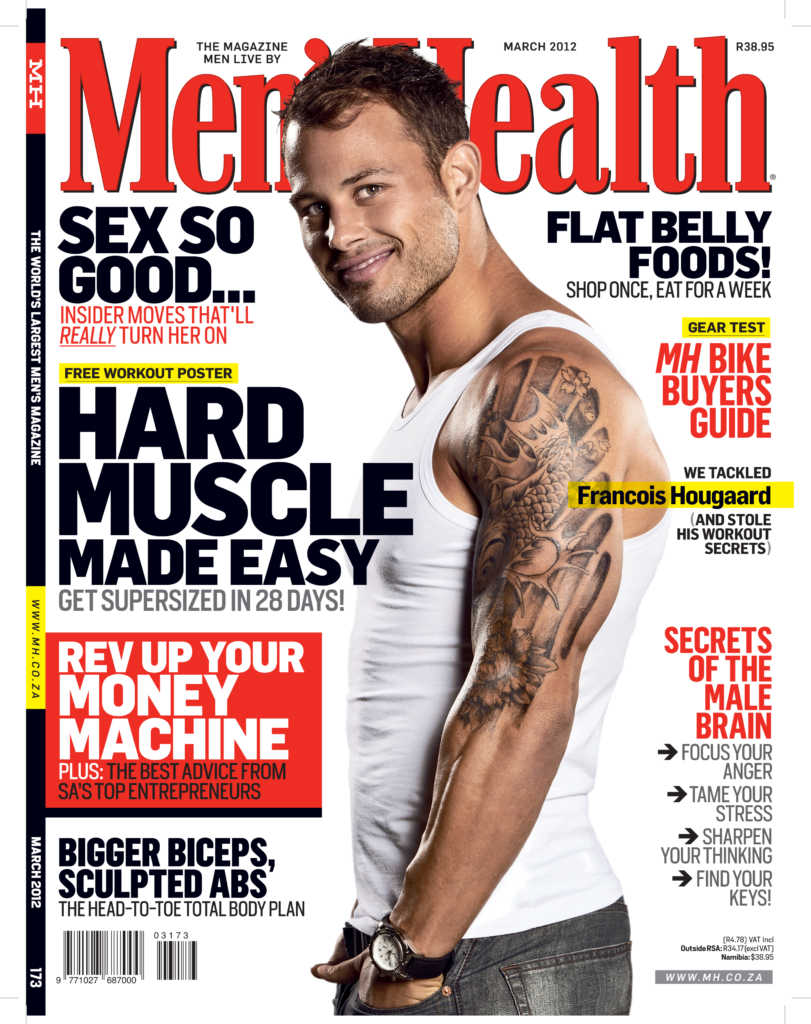 “Although I’m a small guy, I like making contact, tackling and taking the ball up-field,” Hougaard says.

For Francois Hougaard, our March 2012 Cover Guy, it’s all about functional fitness.

“Scrum-half is close to the action, and I like that. On the wing I was always looking for work, because if you’re not doing anything you’re not going to get anywhere. If you don’t put in the work, nobody’s going to notice you.” 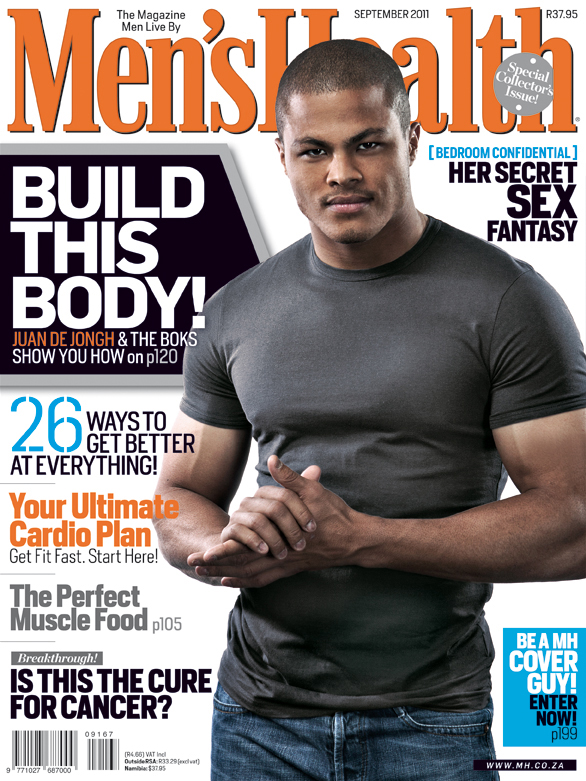 “We need explosive exercises to keep ourselves balanced and mobile.”

In our September 2011 issue, Juan de Jongh told MH that in order to achieve his level of fitness, everything has to start with your core. That backline checklist – mobility, agility, power and balance – puts the focus of De Jongh’s workout programme squarely on his core.

“As backs,” De Jongh says, “we focus on being powerful, but not as powerful as the forwards. We need explosive exercises to keep ourselves balanced and mobile, and while we need to be in condition for contact, we need to have power and agility.” 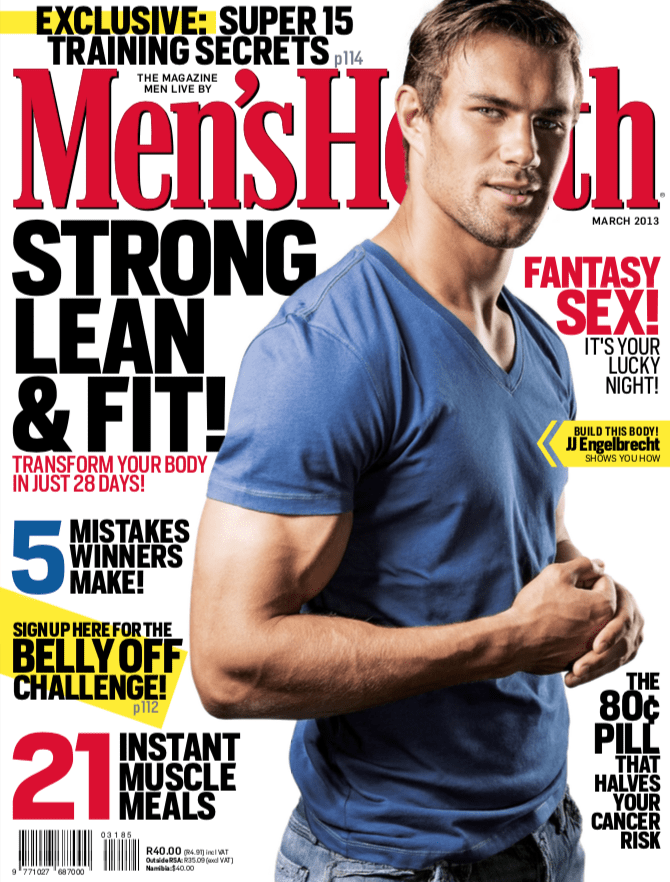 “JJ Engelbrecht is a very fast and explosive athlete with the ability to accelerate quickly and attack the space available.” – Says coach Andre Volsteedt. In the March 2013 mag, we asked various rugby fitness coaches how players such as Engelbrecht perform at peak levels in every game.

“A rugby player needs to work all his muscles, so when I go to the gym I don’t just work my legs. I work everything.”

If there’s anybody whose leg exercise programme you’re going to want to copy, it’s his. Too bad he doesn’t have one. “A rugby player needs to work all his muscles, so when I go to the gym I don’t just work my legs. I work everything,” he says. 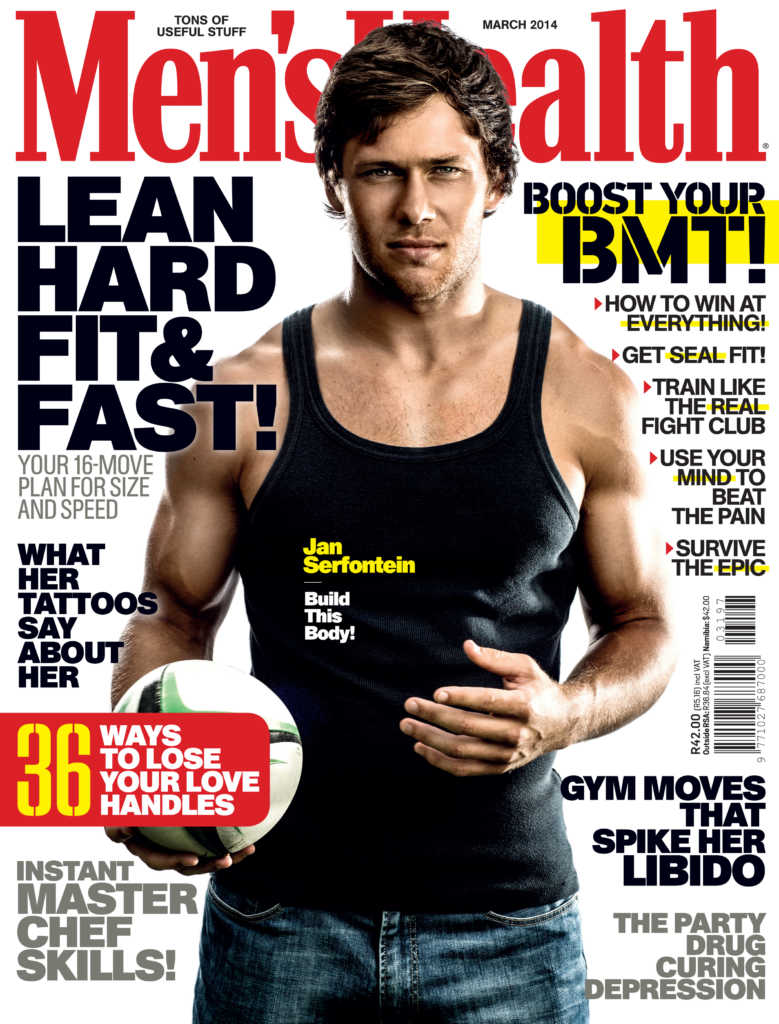 The speedy centre Jan Serfontein is the only player on the list who actually held a rugby ball on the cover. In the March 2014 mag we learned that if you want quicksilver speed on the field, then you need to add one crucial word to your training dictionary: plyometrics (also known as jump training). 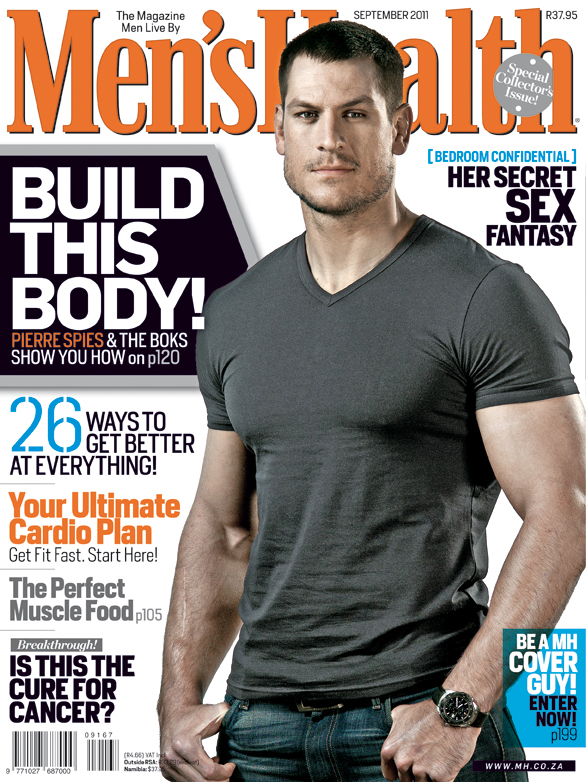 “The only true way to get good results is the long, hard way.”

Pierre Spies flexed his guns on our September 2011 issue, and gave us the lowdown on how you can beef up your arms.

“Guys want results, but they don’t want to work hard,” says Spies. “The only true way to get good results is the long, hard way, and once you start applying that, you’ll find that it’s not only your body that will improve, but your mind will be in a good space too.”

Related: “I Picked Up Weight When My Rugby Career Ended” Here’s How I Shed 20Kgs 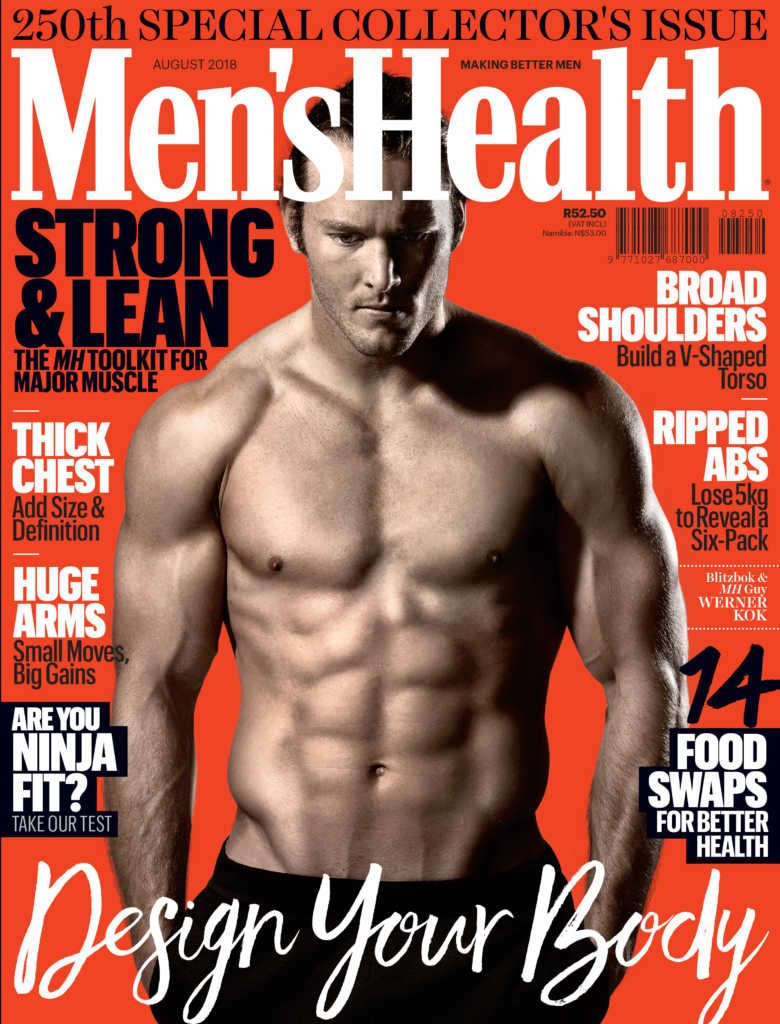 Our current issue features the ripped Werner Kok on the cover. His lion mane may be tied back, but the Blitzbok remains untamed when it comes to strength and speed. Find out his fitness formula in the August mag. In stores now.

The digital version of the magazine is also available online here and here.