In the nearly 10 years bridging those conversations, I can tell you a few things I know for sure. One, he has an industry reputation as a generous gentleman. I can testify: he listens. He engages. He respects. Two, he’s a big dude. He has a couple of inches on me, which makes him six-two (that’s nearly 1.9 metres). But the heroic stature really comes from the broad chest. Today he spends much of our photo shoot sprinting, climbing and jumping around the studio. He doesn’t need claws to sell it. Three, he has an unearthly work ethic, a trait he shares with most hypersuccessful people I’ve met. Skeptics will say he’s able to do what he does because of money, or luck or some other cosmic fix. Balls to that. Four, Jackman was not always one, two and three. The fact is, and I’m going to use the obvious metaphor, it takes ongoing feats of superhuman strength for a man to remake himself. Jackman has that strength. Do you?

Every time I’ve spoken with Jackman, he’s been in some state of intense physical transformation. I don’t think people really understand that level of commitment and what it takes to maintain it over a span of years. Films like Real Steel (training with Sugar Ray Leonard) and Les Misérables (losing 13 kilograms and then gaining it back again) required serious prep. Of course, nothing compares to the transformation Jackman has had to undergo to play a certain heavily muscled mutant.

Take what happened as shooting on The Wolverine wound down. “It was October [2012]. I started having a few treats here and there. I was planning my cheat meals, planning my life leading up to Christmas. And I was like, ‘Uh-oh.’ ” Why? He’d gotten word that X-Men: Days of Future Past was a go for that spring. (It’s out now.) Even though he had another shoot in the meantime – the underrated thriller Prisoners – he had to retrain for Wolverine all over again.

“Once you’re in shape, you can get away with a few treats,” he says. “But every day off requires three days of work.”

For Jackman, the intense preparation is part of the performance, even when the cameras aren’t rolling. For example, he always wants to give himself a solid three months to prepare for any role that might have him in the raw, which is often a possibility with anything Wolverine-related.

“There’s a naked shot in this one,” he says. “Not front naked – it’s PG13 – but full-body. So I made it very clear that I wanted to know the date I’d be shooting that stuff. That was 21 May. And I remember about three weeks before that, I hear, ‘Oh, we’re having some trouble with the day, we might push it off a few weeks.’ ” He giggles. “I said, ‘Absolutely not! I don’t care, you can push anything back you want, but I’m naked on that day!’ ”

At this point I have to ask: is there ever a time when he stops reinventing his body? It’s not a yes-or-no answer, it turns out. Technically, right now, February 2014, Jackman is not physically working to become someone else. But even when he can stop, he doesn’t. He thinks about it, however.

“It’s interesting,” he says. “I’ve been fascinated myself that I don’t want to completely do nothing. This morning, including this [photo shoot], I’ve trained twice. I’m betting that for the next five or 10 years, I’ll still get asked to do stuff where I have to be physical. It’s tempting to just go and do yoga, or swim, or play tennis. But being skinny, I’ll lose the muscle like that. I know how hard it is to get back. And by the way, it’s harder at 45 than it was at 30. Even now, I’m noticing the weight starting to go down. You have to work hard.” Then he starts laughing. “It sucks.”

Jackman makes a deliberate distinction between a challenge and a goal. Goals are single-minded pursuits and therefore limiting. Challenges can expand. Example: can a man be in better shape for his signature role in 2013 than he was 10 years earlier? Watch The Wolverine and you see the answer. Each Wolverine film is an expanded physical challenge. What separates a man who meets these challenges from those who fall short?

“It’s a great question, and it still fascinates me,” Jackman says, using this year’s SuperBowl (a one-sided blowout between the Seattle Seahawks and the Denver Broncos) to illustrate his point. “Think about how the Seattle Seahawks rose to the occasion and Denver didn’t. What is the mental step? I’ve heard that [Broncos coach] John Fox says there are two types of pressure, the pressure you apply and the pressure you feel. They wanted to be applying. But on the day? They didn’t apply any pressure. So it’s all a mind game. Preparation, I’ve realised, is key.”

That’s fine to say. But we’re all pretty sure the Broncos prepared. Their collective wheels came off so fast that one had to question their lug nuts. So what then? “You know that stuff’s going to happen,” he says. “Can you regroup? Even if you have a bad first take, don’t let that screw up the whole day.”

Part of that lesson came from Jackman’s big break, the first time he grew out the Wolverine muttonchops on the original X-Men. “I remember studio people saying, ‘We’re not quite seeing what we saw in your audition.’

[Director] Bryan Singer’s coming over to talk to me. I thought this was a prelude to being fired. Right then I made a very clear decision to do what I thought was right. If I didn’t like the script, change the script. If I didn’t like the action, change it. But it needed to come from me so if I got fired, I was not doing what I thought people wanted – just what I wanted to do. About three days into that, I remember catching Bryan’s eye, and I could just tell that he was like, ‘That’s the guy I hired.’ ”

Stopping, whatever that may mean – taking a break, stepping out of the spotlight, recharging – can never be an option for Hugh Jackman. Recharge? The work recharges him. That’s one of the tricks that successful people like to use. There are plenty of tough-guy clichés about this idea: “I’ll sleep when I’m dead,” for example. But one-liners alone don’t capture the point. Jackman captured the point long ago and lives by it.

“My father has an insane work ethic. I have about 60% of it, but in Hollywood that makes me a fairly hard worker. I got that from him. He never missed a day of work in his entire life. He brought up five kids on his own. He loved his job as an accountant, and he told me, ‘You’ve got to find that thing you love to do, and then you’ve got to be educated.’ Don’t just assume because you love to do something that you’ll be good at it. You have to learn how to do it. I did four years of drama school because of my dad. I was offered a big job on a soap opera. It was that or go to drama school. It was a huge decision. Oh, shit yeah! I remember watching that soap opera and the guy who took that role. All I remember was he played the trumpet. So I turned it on, and there’s this bloke playing the trumpet. And I was literally sitting there eating two-minute noodles, living on a hundred bucks a week for rent and everything, and I’m like, I could’ve done that and gone on to America. So I did have some moments.”

Jackman makes it sound simple, and on one level it is. But it’s not so simple on a day-to-day, real-life level when we’re all faced with personal choices and challenges. If you want to bring it back to simple – permanently – first bring yourself to a point of reckoning, just like Jackman did.

“Learn a lot about yourself,” he says. “You push yourself, challenge yourself, you go to places emotionally and you don’t always want to do that. But it keeps you fresh and young. Our tendency in life is to narrow everything. Worldview, friendships, choices, feelings we have, reactions to things become smaller and narrower. We lose our range.

“It wasn’t until I came to a truce inside myself about the fact that my job rarely will be comfortable that I started to enjoy it more,” he says. “Like Wolverine. You want to get somewhere you’re not physically? It’s going to be uncomfortable. The end result is good, but it’s uncomfortable to change. It’s frightening. So in a way, feeling comfortable is a warning sign. Accepting this as a part of life was a big change for me.”

And once he did, he saw the benefits again and again, and still does today. “Right now my oldest kid has grown about a foot in a year,” he says. “He’s going through growing pains – literal pains – so it’s uncomfortable. But he’s growing. And for me, losing weight, putting on muscle, losing water weight, none of that is easy. The resolve ultimately makes you stronger, and you feel better for it.” 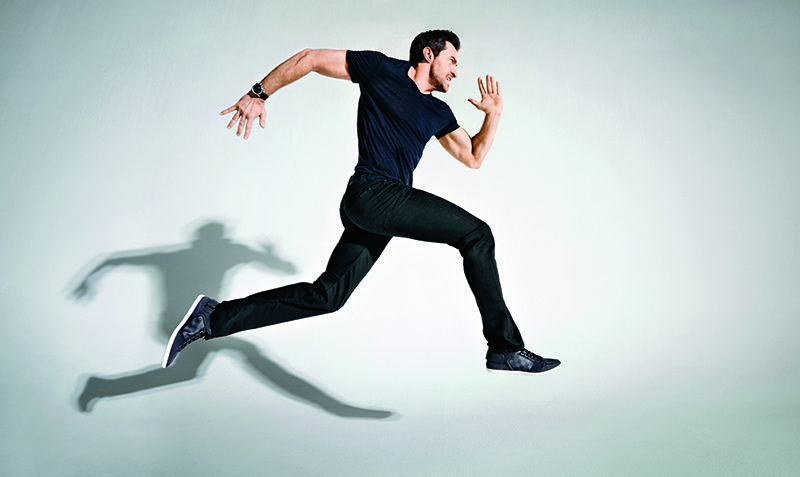