Meet The Heroes: We Chat To The Guys Who Have Your Back When Fires Threaten To Destroy Homes

Meet your local, everyday heroes in this series about the guys who save lives in South Africa.

The remnants of the blaze still burned hot against his face. He took a deep breath, the smell of smoke filling his nostrils and lungs as the billowing puffs of a doused fire rose up towards the brightening sky behind him. For the first time that night, Richard Stubbs had a moment to take in his surroundings.

He was high up in the mountainside of Oudekraal, in bushy territory that had barely seen more than few paw prints in the last one hundred years. And from his vantage point he watched as the sun climbed over the horizon, orange rays illuminating a world that had darkened in the aftermath of a dying fire.

“It was unbelievable,” he says. “It just struck me that this was something nobody else would ever see.” In 2009, Stubbs was driving when he spotted a fire on Devil’s Peak. The roaring inferno was an image that the event director just couldn’t shake for days afterwards. Through a friend he discovered that the Volunteer Wildfire Services (VWS) were looking for new recruits and he offered up his time without a second thought. There was something about being on the frontline that appealed to the former soldier, who had survived an intense training and vetting process to join the parachute division of British Armed Forces. After serving in Bosnia, Kosovo and the Middle East, he moved to South Africa in 2003 and began working in the tourism industry.

After completing his fire training, he was put to work: his first foray into the smouldering battlefield unfolding on the mountains above Hout Bay. “That was quite a tough one,” he remembers. “We had to hike behind Imizamo Yethu and try pinch off the fire before it caused real damage.” It was summer and the wind was fanning the flames, dialling up the heat and cooking Stubbs and his crew in their double-layered cotton gear and heat-resistant soles. Plus, they were hauling around 12kg packs. 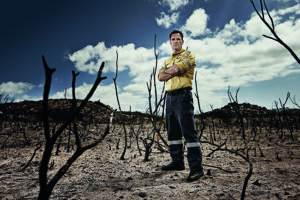 Stubbs would quickly get used to the strenuous requirements of being a volunteer as the Western Cape’s fire season flared into life. The combination of drought and dry foliage regularly turns the area’s landscape into miles and miles of potential tinder for the smallest spark. In 2015, fire services reported around 100 vegetation fires every day.

Fortunately, Stubbs is an avid runner who has completed numerous Two Oceans Ultras, a passion that would help him stay fighting fit as he received back-to-back calls to arms. He was part of the many crews fighting the fires that ravaged through the deep south in 2015, reducing terrain to ash and embers and alighting homes, hotels and guest houses.

While the world saw a giant wall of fire advancing through the area, for Stubbs, every call-out was a small skirmish. “It was me and my team versus whatever stretch of flame we had been called out to knock out,” he says. “I never remember thinking about this giant fire – just about the battle I had on my hands in that moment.”

Firefighters have been lauded for their tireless efforts battling the now infamous blaze that has left scars throughout the area. For Stubbs, fighting fires is satisfying work. “I like the experience the VWS enables. I like going out and battling fires. I enjoy the logistics of the situation. It activates a side of my thinking that sits dormant when I’m at my day job.”

As time goes by, the Brit is finding it harder to juggle a full-time career, volunteering and a new family. With a young child he’s had to scale back his involvement, handing over the reigns of station manager duties at the Newlands station. “I used to get a call-out and quickly drop a message to my wife to say that I was going to go fight fires. Now I have to phone her and ask for permission. And then find out if granny can help look after my kid,” he laughs.

“Time is precious. You have to strike a balance,” he says. “Training alone is a commitment. New guys and old hands alike, we have to refresh and keep learning to make sure we are trained to the highest standard.”