Meet Loyiso Mkize, The Creator Of SA’s Own Comic Superhero

Here’s how artist Loyiso Mkize turned his Childhood vision into a super-powered business. Time to draw some inspiration

Loyiso Mkize never had a superhero who looked like him or spoke like him. In the small town of Butterworth (in the Eastern Cape, miles from the nearest city), his childhood heroes, exploding from the pages of X-Men and Batman comic books, were characters from other countries, planets or dimensions.

RELATED: How This Guy Went From Playing Ball In Gugs To Partying With Jose Mourinho

They catalysed a successful career as an artist, but they also planted the seed of a crazy idea: what if Mkize could bring a real South African superhero to life? What if he could give future generations a role model who would change the way they viewed themselves? In 2015, he took a leap of faith – trading the safety of a full-time job, and the comfort of a familiar lifestyle, for the promise of fulfilling his childhood dream. 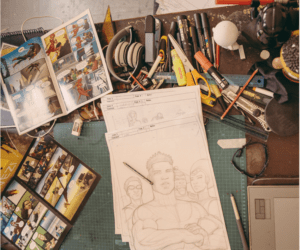 Mkize’s home studio is bathed in natural light from a large window, the warm glow illuminating stacked canvases and a sketched storyboard of half-formed ideas for the next issue of his comic book. A plastic trail of paint tubes, squeezed almost to the last drop, lead towards an unfinished portrait of Nelson Mandela (“It’s for a client,” he explains). The room smells of oil paint. In here, Mkize is in his element. He’s a man who can never sit still – he transitions between media, painting one hour and then sketching the next. It’s this constant energy that has characterised his career, from his early days working on a local comic book to exhibiting artworks around the country. “I have this huge fascination with how far I want to take my career,” he explains. “I think a lot of that has to do with this expectation my parents have always had – you start to embody it yourself, it reshapes the entire way you think.”

RELATED: Rise From The Ashes: The Story Of Long Jumper Luvo Manyonga

When it was clear, at just five years old, that Mkize had a knack for drawing, his parents encouraged him to hone his craft. His father would pick up new comic books at the local CNA, and his mother would page thoughtfully through the young artist’s illustrations. That encouragement came with just one condition: do something with your talent. “It was a powerful lesson,” he says. After finishing school, Mkize moved to Cape Town to study graphic design at the Cape Peninsula University of Technology. But the courses weren’t aligned to his idea of what he wanted to do with the visual arts. “Sure, it’s still visual arts, but it didn’t really sing in my tune, especially at the time.” In his second year, desperate for a creative outlet – and all too aware of the expectations of his parents – he approached the team at local comic book Supa Strikas. He remembers arriving with mountains of drawings under his arms, enthusiastic to get started right there and then. 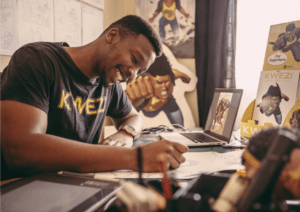 “Working at Supa Strikas was a trip,” Mkize says. “Back in Butterworth, I was a big fish. I was the only kid who could draw, and I was special. But all of a sudden there were lots of big fish and I was feeling very small. It was a humbling moment.” But Mkize was ambitious. He has always believed in setting high benchmarks. “You should never measure yourself against other people; rather find someone you admire, someone you want to emulate, and aim for that,” he says.

RELATED: This Guy’s Unorthodox Approach To Fitness Can Help You To Overcome Any Obstacle Or Plateau

Mkize wanted to be head illustrator at the comic book, and by 2011 (just four years later) he had achieved his goal. Afraid he would plateau, he began painting in his spare time, and then exhibiting. He would go days without sleep. When he began laying the groundwork for illustrating the story of his own local superhero, he was starting to reach his breaking point. “It started to become unsustainable to do all these things at once,” he says. “I had the energy, but I couldn’t give my project the time it required.”

Launching Kwezi, the superhero Mkize had envisioned in his childhood, was a leap of faith. “It was absolutely insane,” he remembers. “I do not recommend it to anyone who doesn’t have the hunger for it.” It was a rocky start. He was entering uncharted territory; comic-book sales worldwide were plummeting, and outside of a few franchises, there was no real comic- book reading culture in SA. However, he knew he would find a way to make Kwezi work. The jump turned out to be a natural habitat for the young artist. It compelled him to be resourceful, it dialled up his ability to problem-solve, and it forced him to be creative – because if he wasn’t, he wouldn’t have survived.

RELATED: How Exercise Saved This Man From Addiction

The first issue of Kwezi sold out within 20 minutes, and there have been several issues since. The comic book has been an unexpected success, for the industry and for its creator. “It was a huge, overwhelming moment,” Mkize says. “It was clear that I wasn’t alone; people were telling me: ‘Finally, we have our own superhero’.” In a way, Mkize’s life has come full circle. His imagination was unleashed by the colourful frames in foreign comics, and now he’s taken those first embers and fired them up into a powerful vision. “I’ve worked like a mule for 10 years. I’ve had my ups and downs, and I’ve learned the values of work life, of starting a business, of pushing myself harder and further, of taking different approaches, of going against convention. “Now, he wants to reap the rewards of the foundations he has laid down. He’s already looking at how to empower future generations of storytellers. “Can I give them a platform to tell their stories?” he says. “How can I ensure the new generation can have its own stories, its own superheroes, and its own place in the world?”