What he’s learnt over the years about how to use his body can work for you too.

Kundai ‘Kenji’ Murapa was never destined to be your conventional pro athlete. “I was the kid always doing random moves as a D-team reserve, and break-dancing at the halftime shows,” says the 28-year-old. “Having attended an all-boys school from primary through to high school, it was all about making the cut,” he explains.

“Achievement was based on stats, and not the sheer pleasure of the art – that’s why most of the superstars from my school days have nothing to represent that part of their lives anymore.” For Murapa, those ‘random moves’ weren’t just a phase; he didn’t do them just to be a part of the programme. “Moving in an untaught, unregulated, unorthodox way was true freedom; skip a few years later, and I discovered parkour as the best platform to nurture this freedom.”

Today, he’s one of South Africa’s foremost traceurs – proponents of parkour – and in 2010 he founded Sabotage Elite Freerunning, in Cape Town. The best part? What he’s learnt over the years about how to use his body can work for you too.

Related: The Surprising Way to Run Faster and Longer 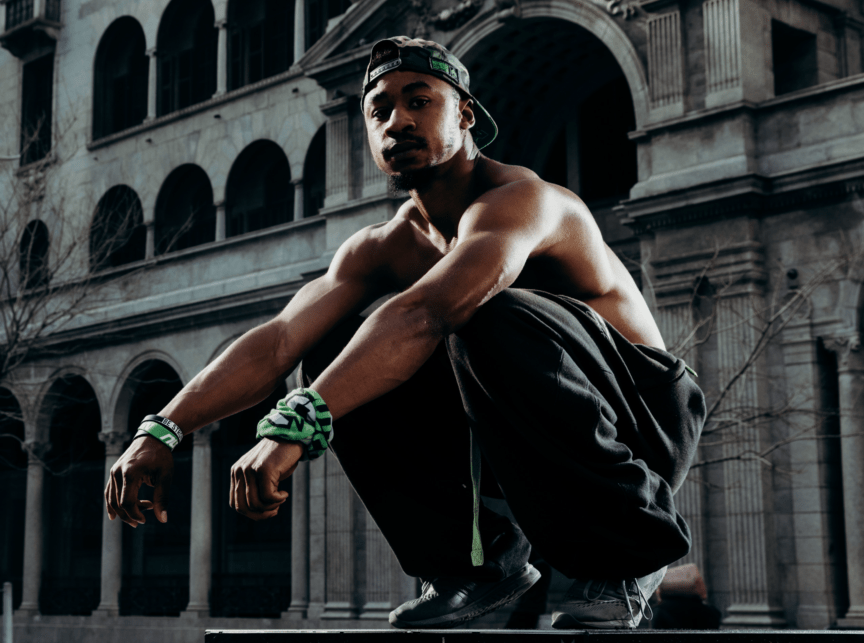 Parkour, as a discipline, is the use of the natural biomechanics of the body for effective, safe movement through an immediate environment. “Parkour was founded on practicality,” says Murapa. “Our motto is: etre fort, pour etre utille – be strong to be useful.

“This translates as a mindfulness in training that allows practitioners to safeguard their bodies for lifelong discipline. There’s a real philosophy behind it, often lost through the gloss of cinema,” he says. According to Murapa, anyone can do parkour and reap its benefits; but the key is gradual, safe progression.

“You need to create distance and power goals in a mindful way that strengthens your body over time,” he cautions. There’s some debate about the exact history of parkour, but many agree that it grew out of the original version of obstacle course racing (OCR).

Related: These Exercises Will Injure You If You Don’t Stop Now

By promoting this method through military training, it soon became a popular, standardised discipline that brought on the advent of le parcours (the obstacle course).” To greatly paraphrase the history: skip a few generations, and we see civilian adaptations such as fitness trails; and in the little-known streets of Lisses, France, parkour (the word ‘parkour’ is a colloquialism from parcours) was born, and soon grew into a popular discipline. Suffice to say, modern obstacle-course races are just re-purposed versions of the original le parcours, and le parcours is what evolved into parkour.

“Popular parkour practitioners such as Jesse La Flair and Tim Shieff have dominated in both OCR and competitive parkour, showing how interlinked – albeit separate – the two disciplines are,” Murapa says.

Where does free running fit in? “In origin, parkour and free running mean exactly the same thing,” he explains; the latter served primarily as an English translation for the French word parcours – ‘to move rapidly through an area’. However, today free running – a term coined by Sebastien Foucan in 2007 – is more nuanced, to define an extreme sport offshoot of parkour with big global competitions, such as Red Bull Art of Motion. 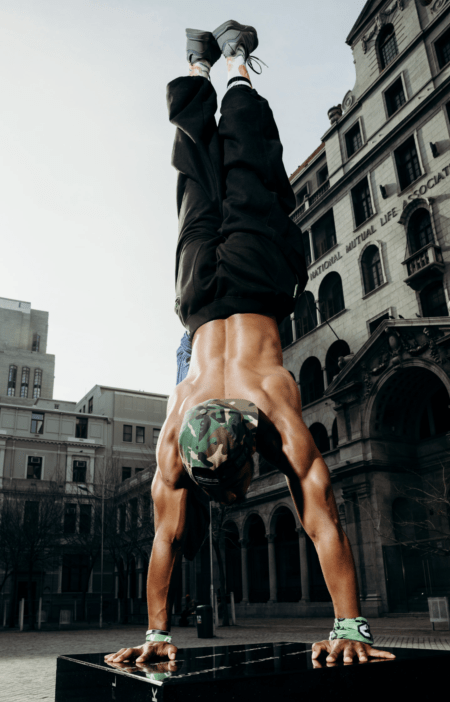 Free running is seen more as a form of urban acrobatics, in which athletes perform tricks using the obstacles in the environment around them. Incorporating elements of parkour, free runners pull off gymnastic moves such as flips and spins as they navigate their way across an area. Free runners tend not to see themselves as athletes, even though their performances are packed with high-performance athleticism. They leap from rooftops, scamper up trees, balance on precarious perches in the big city jungle, and perform remarkable ‘runs’ filled with flips, twists and flic-flacs. It is here that Murapa’s earlier point about progression comes in.

“After enough time and understanding of your body, you’ll hit the big league; and maybe then you can start scaling skyscrapers and jumping across balconies,” he says. “Aside from the fundamental biomechanical elements of parkour, free running also includes acrobatic manoeuvres and elements based more on style than efficient movement,” says Murapa, who – as Director of Sabotage Elite Freerunning, and Chief Communications Office of Parkour South Africa – is a proponent of both. Practising both offers an ideal blend of stamina, stability, balance, power, and brawn, and has turned Murapa into the athlete he is today. Here’s how you can adopt some of the fundamentals:

Related: Is This The Greatest Exercise For Building Muscle & Burning Fat? Here’s How To Do It

To prepare his body for the rigours of parkour, Murapa trains every day; but you won’t find him in the gym. “Training parkour improves both physical and mental capabilities and is said to provide the same mind/body balance as more traditional martial arts and practices such as yoga. Contrary to popular portrayal, parkour was first brought to be as a means of providing the safest option in any situation.” Murapa’s training is all bodyweight-based, but crosses over extensively, from martial arts to calisthenics and cardio work.

The world is heavy.? Throwback to @menshealthza 2017

“Bodyweight training for me is the best way to improve both function and form, because it’s working on the natural, in-built parameters set for the human body.

“The key to being a good mover is to mix up with other disciplines in order to find a common pattern and stable grounding,” he says explaining how he also trains in ‘martial arts tricking’ – much like parkour, a relatively new discipline. “It combines elements of traditional martial arts kicking techniques with gymnastic acrobatics,” he says. “I’m also a calisthenics enthusiast, and use that as part of my training – both to supplement my parkour and just for its individual enjoyment.”

Of course, Murapa still advocates gym training (mainly for rehab after injury or hypertrophy goals), though he currently doesn’t have a membership. “I don’t need one, but it’s good for maintenance and rehab,” he says. “I use a technique drilling programme based on a HIIT (high-intensity interval training) framework, basically using contained, simplified parkour moves in a high-intensity workout. This programme can be used even if you’re not into parkour, but just want a good, functional workout that will help with movement, agility, power, balance and coordination. And it burns kilojoules like a ninja.”

Related: How Nicholas Dlamini Made It To The Cycling World Stage

Squats, lunges and pistols are his first go-to, as most parkour technique involves powering off or rapid deceleration with the legs. “Back raises, lying hip raises, pull-ups, push-ups and muscle-ups are great activators too. I do a lot of movement training as well, and I highly recommend Ido Portal’s fundamental methods as a great starting point.” An added bonus is that Parkour’s benefits reach further than your body; they can make your mind sharper too. A lot of parkour moves involve quadrupedal locomotion patterns (using all four of your limbs).

According to a 2016 study in the Journal of Human Movement Science, “performance of a novel, progressive, and challenging task, requiring the coordination of all four limbs, has a beneficial impact on cognitive flexibility, and in joint reposition sense.” What this means is that through using all four of your limbs and increasing your coordination you can become smarter and faster, both mentally and physically. Not to mention the creative challenges, which are bound to fire your neurons in new ways. What are you waiting for?

Now Get Out There

According to Murapa, anyone with a ready body and willing mind is able to practise parkour. “Age and gender aren’t barriers to entry, and you’ll rely mostly on your mental capacity for creative and critical thinking, as well as recognition of natural movement patterns,” he says.

As a certified parkour coach he teaches a range of people, from kids as young as eight years old right through to adults. But you don’t need a coach to start out, or any particular apparatus or training area. “When it comes to parkour, half the fun lies in exploration and discovery of new spots,” he says. “The other half is in the creative challenge of how many variations of lines and patterns of movement you can unlock in one spot.” Murapa is based in Cape Town, so he spends some time at outdoor gym areas.

“For regular conditioning, I highly recommend the Sea Point Promenade outdoor gym, and Queens Park in Woodstock,” he says. “There’s a decent offering of bodyweight apparatus and obstacle movement challenges. However, I do feel we need more options, as most of our outdoor gyms are limiting to the initiated. Our very own Muscle Beach would be amazing!”

Related:You Can Use A Bench To Build Bolder Shoulders, Here’s How To Do It

“Bodyweight Training Is The Best Way To Improve Function And Form”

THE 3 EXERCISES YOU CAN DO JUST ABOUT ANYWHERE

1. Bar Balance Squat
Plant your feet on a firm rail or bar, and perform normal squats while focusing on maintaining your balance. For more of a challenge, try a single-leg pistol squat.
Benefits: Develops leg strength and proprioception

2. Precision Jump
It’s basically a box jump with emphasis on distance rather than height, and a focus on balance. Perform a normal jump, throwing your arms forward and cocking the knees high as you launch. Land on the balls of your feet and engage a shallow squat to absorb most of the force, and to help maintain your balance.
Benefits: Builds explosive power and proprioception

3. Wall Climbs
It’s a pull-up variation that engages the climbing mechanics. Hold onto the top ledge of a wall with feet planted against the wall. Raise your torso over the ledge quickly, and then lower slowly back down to the start.
Benefits: Upper-body power and grip strength

Want a quick bodyweight workout? Do this 10 Minute Bodyweight Workout