Before he knew what was happening, he was weeping. Tears spilled down from his eyes, glistening lines in the stark sunlight. He was a 12-year-old in a fitted suit, a kid staring at a wooden coffin, a young mind realising that this was it – his dad, this invincible figure, was dead. Then his hand brushed up against the tissue in his front pocket. His mother had placed it there, gently and without a word before they set off to Gugulethu’s cemetery. And in that uncertainty, in that desperate sadness, that thin sheet of paper was his anchor and a reminder that while he had lost his role model, he hadn’t lost his direction. “I knew there that she would be there to guide me,” says Vincent Ntunja. “That if I looked to her, I could make it.” 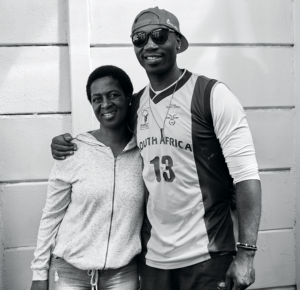 Take Pride
Here’s something Vince tells the kids he works with, whether its on the tar of the basketball court in Gugs named after him, or inside one of the juvenile detention facilities in the Western Cape: “When you leave your house in the morning, there are three directions. Go left? Go right? You’ll find the gangs, you’ll find drugs, you’ll find yourself behind bars or dead. Go straight, and be patient, and you’ll find success.” Growing up in the township during the 1990s the idea that he would become an international basketball player-turned-model was just a fantasy that would fade the moment he stepped foot on the dusty streets, the resonance of those dreams swallowed up by the droning bass from a passing taxi.

After his father’s death – he was a celebrated local footballer who was stabbed to death by gangsters – his family struggled for money. Shoes? A luxury. He’d ride out a year in a single pair, taking the rubber soles from school playgrounds to soccer pitches, wearing them down until he was practically barefoot. But watching his mother work tirelessly to put food on the table, and to keep him clothed, he took pride in what he had. “My uniform was always immaculate,” he says. “I made sure my tie looked just right.” While she was quick to rattle out lessons and mantras, his mom guided him with a loose hand. She lived by example, and then gave Vincent the room to do the same. “One thing that stands out is that she gave me the key to our house,” he says. For a youngster, that was unheard of. 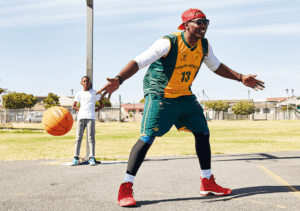 His friends’ parents didn’t trust their little tykes, but Vince was given free reign to come and go as he pleased. In the beginning he pushed the boundaries, rolling in during the early hours of the morning. But a disapproving look, a day spent exhausted, and he started to learn his lesson. Within a year he was always home before six, a disciplined teenager learning the value and benefits of sticking to a tight routine. He received affirmation and acknowledgment in the form of a warm smile and doting look.

“ In the township there are many opportunities to do the wrong thing.”

Stick to the Plan
“For a parent it’s scary to give your child this much freedom,” he says. “In Gugulethu there are many opportunities to do the wrong thing.” One example: gangs. “I remember seeing them all the time, those kids with the new Jordans and all the girls,” he laughs. “And sometimes you really want that. I would have to remind myself that that was coming, I had to be patient; I had to do this the right way.” His friends gravitated in the opposite direction. And before he knew it, he was surrounded by a social circle of drug addicts, gang members and thieves. He started feeling like an outcast, pushed to the fringes of a community, orbiting the nucleus of a lifestyle that was poison to what he wanted to achieve. “But I believed in what my mom taught me. Be patient, and you will find success.” Near the end of the 90s, Vince discovered basketball. It started with a few pickup games after soccer practice, and then he was skipping practice entirely. At the time, the township revolved around soccer and the attitude towards basketball was hostile at best.

“They would call us moffies. I didn’t care. I loved the game.” Three months later and he was invited to Western Cape trials. He arrived barefoot after ruining his school shoes on the on the courts, and somehow – “I like to think it was just natural talent” – almost made the final cut for the campus team. It hardened his resolve, and the next year he dominated the trials. In a meteoric rise, he qualified first for the provincial team, then nationally, before jetting off to Russia to take part in the youth world championships. Even looking back now it felt like life was moving at the speed of light. “Sometimes I ask myself, what happened to that kid running around Gugulethu?”

Give Back
Drug dealer. Addict. Serial killer. Vince lists the fates of his old friends, the latter who was once fondly referred to as his twin when the pair were still two little kids chasing through the streets. It’s a humbling reminder of how, between the financial strain and the emotional burden of his father’s death, his mother was able to help him steer through the dangerous traps of the township. “When I visit prisons to give talks I run into people I knew from my street. Some of them will be behind bars for the rest of their lives,” he says. After a strong performance in Russia, Vince was invited to join 499 others at Michael Jordan’s Flight School in the US.

He managed to stand out from the crowd and was named the most valuable player at the esteemed training camp. That honour came with more than just a trophy and a handshake from the legendary basketball player himself. Not only would Vince be able to play at a varsity level in the home of the sport, but he received a full-ride scholarship to a top school, too. “I still have that trophy sitting on my bedside table, and it’s a reminder of what I’ve accomplished, of where I came from and where I am going,” he says.

“I didn’t think twice. She had always been there for me. I had to go back.”

Studying abroad never happened. Nor did the college ball. After a few weeks in the US he was contacted by his family: his mom was sick, plagued by migraines, and left bedridden for a month at a local hospital. “I didn’t even think twice about it. She had always been there for me. She was the only parent I had, I had to go back.” He never regrets leaving behind the opportunities in the States. He is still grateful he was given a chance to support his mother.

When he returned to Gugulethu he was given a hero’s welcome. Local politicians lauded his success; a basketball court was named in his honour. And, in his eyes, he piqued the imagination of hundreds of youngsters. “You know, I wanted to show them what hard work looked like, what you could do if you left your house and chose to walk straight.” 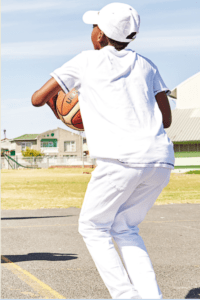 Push Yourself Further
In 2016, the Pulse Models talent was flown up to Prague to shoot a bumper advertising campaign directed by Guy Ritchie. He spent his lunch breaks discussing world politics, friends, family and sport with his co-star, José Mourinho. He still feels like he has to pinch himself. That he has to remind himself that, with the help of his mother, he was able to pick himself up in the wake of a tragedy that would’ve broken most men, let alone boys, and make something of himself, to preserve the legacy of his father, and the lessons of his mother. Vincent’s story hasn’t ended.

There will still be more opportunities, more chances to reshape the imaginations of the kids from his home town. You’ll find him there, on the court, dribbling between lines of children, passing the ball and passing on those same lessons that made him the man he is today.

“You know, my mother doesn’t say to me she’s proud of me,” he laughs. “But she’ll call me, and she’ll ask me if I want to grab lunch, and you can hear how proud she is.”