His legs felt cold, his back was a firebrand of pain that exploded around his neck. He felt the man tap him on his shoulder, he tried to stand – but there was no movement, just a sinking dread, a panic that rose and fell with each struggled breath. And there, on the shoulder of that road, with the world plunging into twilight and his wrecked car lying next to him, he knew he was going to die. “Sometimes I think this may have been the best thing that’s ever happened to me,” says Alwyn Uys, glancing to the wheelchair at his side. “It opened my eyes to who I was and what I was meant to accomplish.” 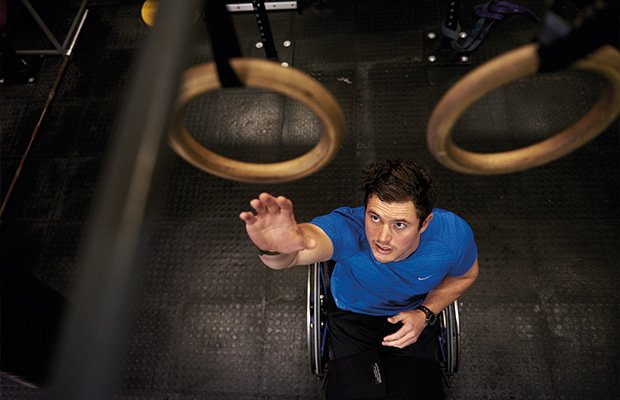 Back in 2014, Alwyn was on a comfortable trajectory. He’d spent his university years bolstering the ranks of Maties’ dominant rugby team, bringing speed, aggression and power to the pitch. But a self-proclaimed realist, he hadn’t ditched academics. After finishing his Bachelor of Commerce with a focus on Logistics, he moved into the family business. Meanwhile, he was subbed out of the scrum after suffering a brutal arm injury that made him shift his focus to competing in triathlons instead.

But here’s the bottom line: Alwyn was happy. “Things were good,” he says. “I had a solid group friends, a supportive family – everything was going my way.” However, subconsciously, the young sportsman had missed something. Outside of sport, he didn’t have his own identity, he admits. He had defined himself by what he could accomplish physically. If that were to disappear, did he even know who he was? He received his answer while driving into PE in 2014. It was 7pm, he was alone, but stone-cold sober. The only hitch? His arm was in a sling and his belt was unbuckled.

“I took my eyes off the road for one second.” The vehicle swerved into the shoulder, hitting a dip between dirt and tarmac and sending it spinning. Alwyn was flung through the windscreen. He remembers seeing the airbag, flying through the air, the impact – then darkness. “It must’ve been over in less than a second.” When he came to, and he guesses it was around 20 minutes later, he was looking up at darkening skies and a concerned face. “I tried to get up,” he says. “But I could just feel my body was cold. The guy who found me told me my back was broken. I felt like I was dying.” Where the crash was over in seconds, the ambulance ride stretched into eternity as the pain kicked in. He would later find out he had cracked his neck, broken his back and snapped his femur. His body had been broken against the ground and the reverberating pain of the impact pulsed through him, each wave more painful than the last.

“The guy who found me told me my back was broken. I felt like I was dying.”

“This can’t be happening to me,” he says. “That’s What I remember thinking. I’m healthy, I’m fit. I thought I was invincible.” Alwyn was certain he would walk again. His family and friends, hopeful, always verging on tears, told him the same thing. But each day he woke up and his legs were the same dead weight they were the night before. Cold, unresponsive, turning a dagger of dread in his stomach. The young rugby player was never told he would never walk again. Those conversations happened around him, and he read the diagnosis in the expressions of his parents, in the way the nurses unfolded his wheelchair and during those long hours spent learning how to shower, how to dress, just how to live again. “Rehab was exhausting,” he says. “It was stress from the moment I started – stress on my body, my head. I would just fall asleep right afterwards.” Learning to start again was a challenge. Simple functions he took for granted – going to the bathroom, prepping a meal – were now uphill battles.

Looking down the barrel of a life like that, it was easy for Alwyn to slump into depression. “What life could I really have?” he asks. “I didn’t understand why I was still alive. I would look at the photos of the wreck and ask myself: How was surviving this any kind of mercy?” Around him, other patients were dying. He counts six that passed away during his three months at the white-walled facility, and sometimes he had wished he could count himself among them. “I was in this strange, foreign place, in a body I didn’t recognise anymore.” Being there is what saved him. Surrounded by other patients, he met guys who were paralysed from the neck down. “I still had my hands, my arms,” he says. “I could see a path to a good life. I wasn’t thinking about sport. I was thinking about living again.” 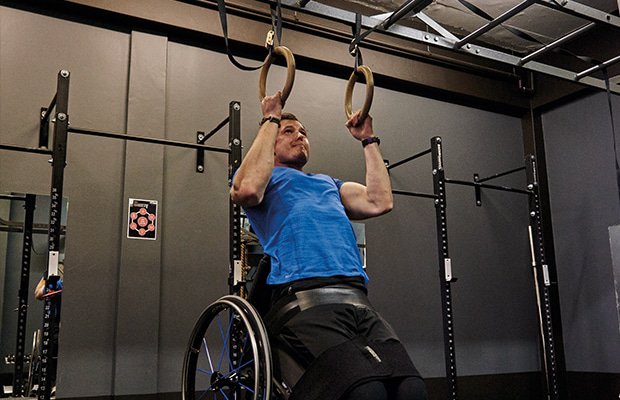 Coming to terms with his condition wasn’t just an internal battle. Alwyn found solace in the company of his friends, too, who would normalise his life in a way no rehab facility could. “My mates would come through and always try and get me outside,” he says. “That was definitely a high point. They didn’t look at me differently. My wheelchair bothered me so much in those days, but they didn’t seem to see it as a problem.” Those relationships kept him sane in the face of daily challenges as he navigated his way through a new life on two wheels. But he was still grappling with his identity. Before, he was the sportsman, the guy who excelled on the pitch, the track, you name it. Who was he now? It was a question he asked often every day. “I realised that even though I had lost so much, I was still the same person. My humour came back; my life came back.” A trip to a rehab in Australia instilled him with confidence. When he returned, after travelling alone, he told himself: “I’ve got this. Even on my own, I’ve got this.” He went back to work and began to hit his stride. And after he conquered life’s daily challenges, he relished new ones. And that’s how he found his way back into sport.

After looking at all the sports available to him, the young athlete gravitated towards rowing. His years spent on the pitch had equipped him with monster upper-body strength that made him a natural in the rower’s chair. But even better, when he was rowing nobody could tell him apart from the able-bodied athletes. “This was it. I was hooked.” Diving into Paralympic sports opened up a world of opportunities. He discovered wheelchair racing, hand cycling sprints and the crazy fact that he could still swim even when his legs weren’t kicking. On his feet, he had hit his physical potential. But here? “Before, I saw what happened to me as a tragedy, but then I started to think about it differently. Everything I did before the accident was just prep for the next part of my life. I started to think, maybe this was the best thing that ever happened to me.”

He is now part of the SA Paralympic team and is training for his first triathlon, a challenge he was eyeing up before the crash derailed his plans. He’s going to take on the Cape Town Cycle Tour with his dad this year, and that’s a big one, because the pair haven’t had a chance to ride together since he was paralysed. And the best part? When Alwyn wakes up in the morning it isn’t into the icy cold dread of those first days lying in a hospital bed. He wakes up excited to work, to train, to live. “I just want guys to know that you don’t need to be put in a wheelchair before you start living,” he says. “You don’t need a near-death experience to start again. I wish everyone could get on that page. It doesn’t have to be training – but whatever you do, do it with passion.

“Far too many people talk about what they want to do, or are going to do, but you won’t always have the strength, the mobility, the life that you have now. Use it. Get out there and do it.”