How These Guys Saved Their Lives Through Surfing

They came from crime-ridden neighbourhoods and turned the tide on their upbringings, one wave at a time

ALFONSO PETERS is a stylish longboarder. The man they call Alf is the head coach at Roxy’s Surf Emporium in Muizenberg, has received national colours multiple times and is a threat in every contest he enters. But it wasn’t always this way.

“It started small,” Peters explains. “Bunking school and going to chain stores and shopping centres to steal stuff.” He was 10 years old when he took to the streets to escape the realities of extreme poverty in Manenberg on the Cape Flats and an alcoholic, single-parenting mother.

Related: What This Cape Town Guy Did When He Came Face To Face With A Shark

“Police often took me home during those early days,” he recalls. “They would see this kid wandering around the streets of Cape Town and ask where my home was. My mom would scold me and then I would just run away again. Eventually I started staying over on the streets and didn’t go home for long periods of time.”

In and out of youth shelters and yo-yoing between living on the streets and the stark realities of his home, things escalated for Peters, and by 15 he was running with a gang. “Then one night I was with this gangster, and we were caught breaking into a car,” he says. Peters was arrested, but because of his age, was released on the Monday. He was charged and given a court date. “I went back to the streets and thought a lot. I realised this wasn’t the life I wanted and I just broke down right there,” he says.

Today, at 28, Peters is the head of the coaching programme at the popular Roxy’s Surf Emporium in Muizenberg, is happily married, and has competed for his country on the international stage. 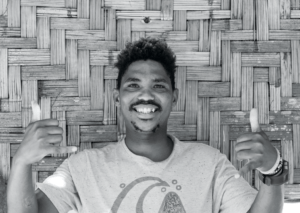 Peters credits Ryan Dalton, a social worker from the USA who was in the country working through the Beautiful Gate organisation, to helping him turn his life around. “Ryan always knew where to find me,” he says. “He came to me with an opportunity – he took me in and sorted me out with school fees, clothes, everything.”

Peters went to the School of Hope, which offered free surf lessons at Surf Shack. He signed up by chance, not thinking he would like it. “Surfing just became such a passion and opened my eyes,” he says. “It pulled me off the streets.”

“I think I was searching for something,” he says. “You know I had lost my dad when I was very young and my mom was an alcoholic – she’s in recovery now – and she would get drunk and beat me up. It was almost like I was looking for a grounding of sorts,” he says. Surfing gave him that foundation. “It was something I could wake up early for every day.”

Dalton eventually returned to the US, and Peters went to live with his older sister and her boyfriend. “When he left I couldn’t pay my school fees and stuff, so eventually I dropped out and started coaching surfing full-time at the beach,” he says. This eventually lead him to Muizenberg, and Roxy’s Surf Emporium.

Related: This Is What You Need To Do To Avoid Shark Encounters This Summer 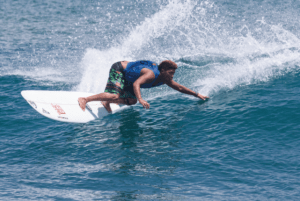 “Surfing kept me sane,” he says, explaining how he could easily have returned to his old ways during that time, but the passion to improve and to be out in the water every day burned too strongly. “It kept me away from the streets; every time I went surfing it was just amazing and I knew I had to stick it out.”

“Surfing is like therapy in water. You go out there and you don’t think of anything else – just that wave that is coming. That’s what you focus on. Then when you come out it’s almost like a weight has been lifted,” he says. “I love helping people learn to surf. This is my passion.”

JOSHE FAULKNER is a progressive shortboard surfer from Jeffreys Bay. Pronounced Jo-say, Faulkner is just 18, but has national titles under his belt and has travelled all over the world to compete. He was saved by surfing at an early age, yet he believes it could so easily have been different. “There is nothing to do at home after school,” he says. “So a lot of guys in my area get into trouble and go to jail at a young age.” 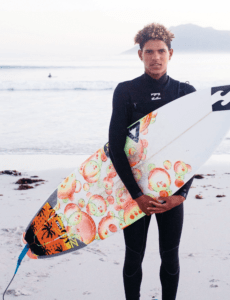 Geographically, Pellsrus is a suburb of South Africa’s most famous surf town, and some of the houses are even built with face brick, but that’s really where the similarities to Wavecrest, or any of its other suburbs, ends. It might as well be on the Cape Flats – tik rules the streets and alcohol rules at home. It’s a matriarchal society with many of the dads being fishermen working away from home, or just not involved with the kids at all. In terms of a nursery for national-level athletes – especially something as non-mainstream as surfing – it is not what you would call ideal.

Much like Peters, Faulkner is pulling off the classic South African sports hero story: rising above his situation (or perhaps feeding off of it in some quiet, emotional way) to become a serious competitor.

“I want to go pro,” grins the quietly spoken teenager. “Qualifying for the WSL (World Surf League) Championship Tour – that’s my goal.” For Faulkner, who started surfing at the age of seven – thanks to his older cousins, Bertie Stuurman and Dominic Abersalie and the guidance of J-Bay surfboard shaper Thys Strydom – this is a very real possibility.

Acceptance and accolades in the surf industry is one thing, but back on the streets of Pellsrus, Faulkner’s success (and that of a few close friends who are walking the same path) has had some different spin-offs.
“People don’t really travel much,” he says, “at all actually… so they don’t really understand some things.” He’s talking as much about surfing – and competitive, career success in this sport, in a place where cricket, rugby and soccer are the default norm – as well as trying to explain to his community about things he has seen in the US, Ecuador or Portugal.

Related: Kick The Year Off With The Men’s Health 31-Day Summer Body Challenge

The way things are going at the moment, he will soon have to explain a lot more places, and titles, to the disbelieving people back home. 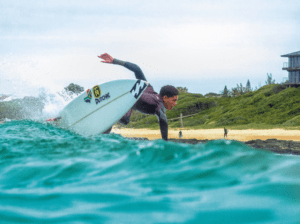 1. Wash Away DOMS: Taking a dip in cold water may ramp up your recovery time after a training session. A study from Chile tested participants 24 to 96 hours after a workout, and found that immersion in cold water helped decrease the effects of delayed onset muscle sore – ness. The cold in turn lowers the temps of damaged tissue con – stricting blood vessels and reducing swelling and inflammation.

3. Soak Your Calories: But there are benefits to warmer waters, too. Research conducted at Loughborough University discovered that soaking in a hot bath could burn the same number of calories as going on a 30-minute walk (around 140 calories, or 590 kJ). However, you’d have to slosh around in the bath for at least an hour to see those benefits.