one of the producers was looking at Frank Solomon a bit funny.

‘‘Has anyone seen you?” the guy asked Frank, who had no idea what the guy was talking about. Then someone else came over and they both gave Frank the once over.

“I felt like an animal in the zoo,” says Frank, who was then told that he’d make a perfect Gerard Butler double.

And that’s how Frank got his first taste of Hollywood.

So what did he have to do?
“Most of the doubling I did for Gerard was just paddling. When I did surf though I had to go left. Going left at Mavericks is pretty sketchy. They kind of hinted: ‘You dont have to go left, but we are looking for a shot like that, and if you happen to get one and fall then there are big bonus’s to be made.'”

Frank had been surfing everyday, was eating well and feeling good. He reckons that big wave surfing is all in the head, and that all you really need to do is stay positive and make sure that when that big day comes you’re ready.

The movie is a true-life story on the late Jay Moriarity, arguably the most respected surfer to ever surf Mavericks. With a budget of $100million and starring Gerard Butler, Frank reckons that every time he shot about one hundred people pulled together to make it happen. From directors, all kinds of foot soldiers, water safety crew, a fleet of five boats and about eight jet skis and a helicopter.

“At one point the helicopter was filming with a $500,000 camera hanging on a 30ft cable, tracking guys as they surfed down the line, which was a hell of a scene to watch. After about ten minutes of filming the camera went through a wave and almost hit a surfer. Sorry for insurance!”

After meeting Gerard Frank was invited, along with a couple of the other surfers, to a night out on the tiles. This is Frank’s account of their night:

“We arrived at the bar and there were only a couple people there. I thought to myself, ‘Jeez this looks pretty lame for the birthday party of the star of 300.’ Top big wave surfer Greg Long was with me and when he saw my trepidation he said, ‘There has got to be a back room.’ Sure enough at the back of the bar I see two giant bouncers with ear pieces standing in front of a door. Inside was a scene straight out of entourage. The moment Jerry saw us he said, ‘There are not enough women here. Lets go somewhere else.’ In about 10 minutes there were a couple limos out front to pick us up, as well as the 20 other people that are constantly looking after him… So we were whisked away to another club with more back rooms and so it went… I’m not going to go into details about what went down that night but let’s just say it doesn’t suck being a Hollywood star. Or a kid from Cape Town with Gerard Butler as your wingman.” 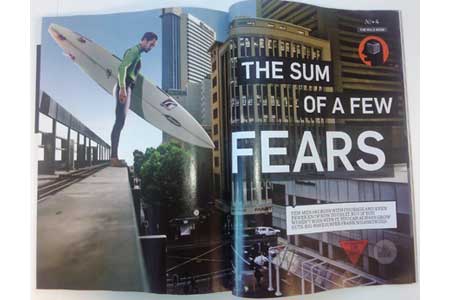 * We dangled Frank off of our office block for the feature The Sum Of A Few Fears. Grab the March edition, on sale now, to check it out.

Oh, and here’s a video of Frank, check it out.