Adam Fine turned five-a-side football into a 150-strong business. Here's how he went from the first pitch to the pitch, by finding the right players, building a winning mentality, and moving the goal posts.

He was an 18-year-old in a suit. The office: his university digs, where business plans and socialising clashed in a constant battle for his attention. Convincing investors to give him money? That was never going to be easy. “I basically started with negative credibility,” says Adam Fine. “But I was single minded. There was no other option but to succeed.”

The young businessman first coined the concept for his five-a-side football business, Fives Futbol, while travelling between the UK and South Africa. Although he grew up in London, his father was from South Africa and he still had family on the continent. While five-a-side was picking up steam back in Britain, no one had pushed the sport formally in SA. Which for Adam, especially after the FIFA World Cup in 2010, was strange. “There was definitely a gap in the market,” says the entrepreneur. “SA has massive untapped potential. The players are on another level, the country is sporting mad and in 2010 [during the World Cup] you had all eyes on South Africa.”

It was a glimmer of an opportunity, one Adam was scared he would blink and miss. He donned a suit and started pitching. The concept was simple, but ambitious.

Fives Futbol is played on state-of-the-art, all weather, floodlit, synthetic grass fields. Players can sign up, compete for the day or slog it out in seasonal leagues. The scaled- down pitch, smaller teams and slimmed rulebook mean the sport is ultra accessible and gives players more touches (sweet mercy for anyone previously lumped with the unfortunate task of playing defensive mid). And to bring this business to an untapped market, Adam would build these venues in so-called untapped spaces. You may have spotted the enclosed pitches on office block rooftops, or in a hidden corner of your local mall.

“I don’t get involved in anything I’m not excited about commercially,” he says. “The commercial model needs to be an upside for the business and its customers.”

Early on, it was clear that Fives Futbol’s win-win scenario was not only giving the SA public access to high-quality sporting facilities. Adam had also found a way to help landlords create income using “dead space”.

By 2011, he had two venues in Cape Town: one in Greenpoint and another in Sunningdale, both launched on the back of his life savings at the time, just R85 000. 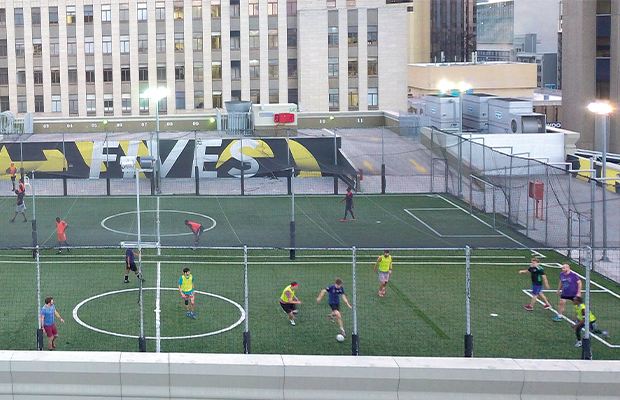 While Adam wanted to devote every waking minute to running his business, he still
had to finish his economics degree back in the UK. “I ended up running my business from my bedroom at university for the first year,” he says. “I’d wake up early, take calls from my staff down [in SA], and then jump into my studies.”

It was a challenge, but it’s a crucial part of what makes a successful entrepreneur. For Adam, if you believe in a business idea, you have to start working on it right now.

“I’m not a believer in this mentality that you have to drop everything to pursue your passion,” he says. “If you have a job, and you want to do something else, start working on it. Whether it’s on weekends, in the evenings after you’ve sorted everything else out, you should want to work on it.” Running a business requires serious mental grit, and finding the stamina to bash out a business plan after a 12-hour shift in the office builds grit like nothing else. Plus, it primes you for the full-time commitment of running a business, adds Adam. “I don’t really have time off,” he says. “If I’m out at the beach and I get a call, I have to take it. There’s no paid leave.”

After finishing university, Adam immigrated to South Africa. Early signs showed that his business had serious room to grow, but he needed to start bumping into the right guys at the right time. “That’s part of the beauty of building a business here,” he tells me. “In London, it’s almost impossible to get in contact with the big guys. I mean, they don’t really care who you are. But here, you could be sipping coffee and meet the MD for adidas, for example. It’s so much easier to get sit downs with incredibly important people.”

We’re sitting at Naked Coffee in Seapoint. The clientele is an eclectic mix of suited business types, models, longboarders, and an old guy trying to make sense of the gourmet brews. Adam takes a sip of his flat white. He’s been animated during the whole conversation, but when we start talking networking he hits the next gear.

For Adam, networking – and doing it right – is at the core of running a successful enterprise. He reminds me that he started with “negative credibility”. He was young, untested and an outsider. He knew he needed investors, and to do that, he knew he had to stand out.

“Networking feels like work if you’re doing it right,” he says, dismissing the idea you can build a business on boozy lunches. “It’s all about follow up.”

He would hit up football conferences, shake hands with 300 leaders in the sport, and deliver elevator pitches to each and every single one of them. He knew there was probably about a 1% success rate. “But I’d get those business cards, and email each person directly, thanking them for their time.”

It was painstaking labour, but Adam says that it was this commitment to networking (and following up) that helped him get his foot in the door. And it’s that latter part, the following up, that he’s made part of his day-to-day philosophy. “If you say you’re going to do something, then do it the same day. Doesn’t matter if you send that email at 11.59pm, just make sure it gets done.” Over six years, Adam cultivated a dedicated group of investors. This dream team is more than just a source of capital, it’s also where he goes when he needs advice. They’ll ask him if he’s factored in A, B and C. Did he think of this? Maybe it’s time to slow down. Adam has always been open to others’ opinions. “You can’t fear negative opinions,” he says. “Even if the opinion is wrong, it’ll help you notice something you hadn’t considered or get you to think differently about your business plan. You have to be ready for your idea to be absolutely obliterated and start again.” 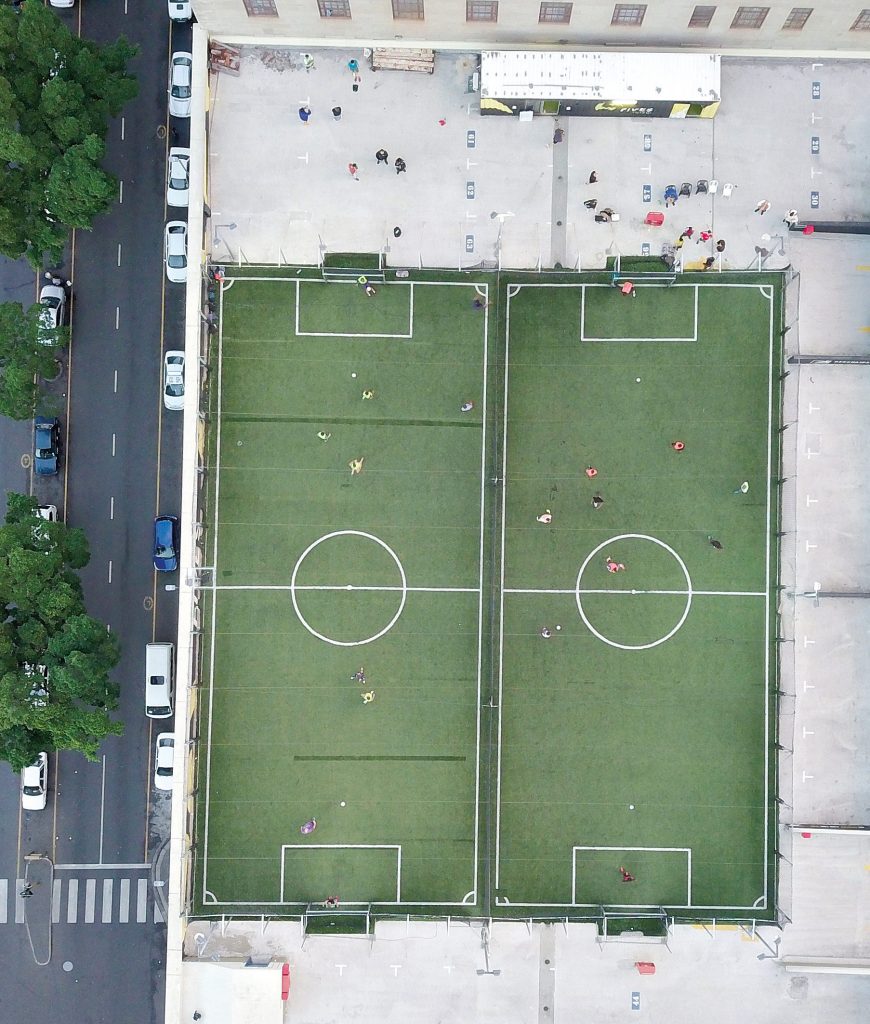 “Most entrepreneurs can’t have a fear of failure,” cautions Adam. “It’s either sink or swim, and we believe, maybe naively, that we’ll find a way to swim.”

Fives Futbol has exploded in popularity. The company now has 20 venues, employs 150 full-time and part-time staff, and runs many junior programmes and outreach efforts. Along the way there have been difficult years. Times when clients didn’t pay on time, and Adam and his business partners were left cash strapped. “But we still made sure to pay our fantastic staff,” he says. “I built this business by honouring my commitments, and taking care of our staff is the number one priority.”

For Adam, who is already toying with the idea of stepping back and letting someone step into his position, the company has become more than just a vehicle to bring five-a-side soccer to the masses. It’s a driver of social good, a way to create jobs, to reach out to struggling communities and provide sporting facilities to the people in those communities. It’s not a PR stunt; Adam believes all business owners in South Africa – because of this country’s history and very real modern-day struggles – have a responsibility to give back. This shift in mentality isn’t just changing how entrepreneurs run their companies, it’s also changing how employees perceive those companies. A 2016 Cone Communications survey found that 75% of millennials would take a pay cut to work at a socially responsible company.

Adam’s approach to hiring has been to promote from within. While there’s no strict hierarchy in the business, Adam has made sure to reward staff who have been with him since day one. Part-time trainers are now full-time managers, overseeing multiple venues. The rewards of running a successful business aren’t always quantifiable. Sure, money will buy you a new Beemer, but it’s the process of working through those everyday challenges, to remain unwavering even when those problems are unrelenting, that reshapes who you are as a businessman.

In many ways, Adam is still that same 18-year-old in a suit. He’s a child at heart, drawn to the fanfare of the sport. But he’s now aware of the impact his actions can have, that the right steps can not only change the course of his life, but the lives of many others. Whatever happens with the business, whether it thrives on its own, with him at the helm, or fails, it’s that new awareness he will carry into the next venture.

READ MORE: How This Pro Footballer Stays Motivated And Is Changing The Lives Of Young South Africans