Finding The Ultimate Balance: How This Local Guy Manages To Be A Top Athlete And Actuary

When he turned his eye for numbers to accumulating miles on the road, this actuary starting seeing some serious returns on his investment

For qualified actuary, Tobie van Heerden, staying fit helps tie together different parts of his life – and keeps him sane at the same time. Between his busy family life and an extremely demanding work schedule – he is the head of Middle East and South East Asia in the Asia Pacific Client Group at Investec Asset Management, and spends more than half of the year on the road – Tobie says he often feels as if he has a split personality. “I’m either in the air, in Singapore, the Middle East or London. The rest of the time, I’m at home in Stellenbosch.”

Despite his brutal travel schedule, Tobie is able to maintain his fitness through careful planning and the adherence to a routine – something he says enables him to get the most out of his life. “Structure and discipline are key to me being able to find time to work, exercise and spend time with my family. It’s important to me that I ride for enjoyment, but it’s also great for managing my stress and keeping my weight under control.”
In last year’s Absa Cape Epic, Tobie and his teammate Carel Vosloo finished fourth in the Masters category and he also placed second in the popular Veterans category of the Tankwa Trek, an international three-day stage race covering more than 250km. “It’s only really been over the last four to five years that I’ve picked up the intensity, and become much more competitive, focused and regime-oriented about my riding,” he says. “With work stress and the amount of travelling I do, cycling has become an outlet for my frustrations. It’s a way to clear my head and spend time with friends.” 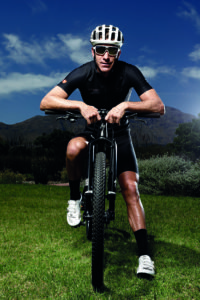 Tobie might only be hitting his stride as a cyclist now, but he has always been a keen sportsman. “I started playing rugby as a kid at school but I loved track and field and swimming, too.” After a nasty concussion in his second year of university (he needed to be stretchered off the field) Tobie swapped rugby for the triathlon – and his love of the bike really began.

“When I started the triathlon I weighed around 92 or 93kg, and it took me a good two years to change my body shape from that of a rugby player to someone who was built for running and swimming.” He was soon representing Maties and Western Province in the triathlon, and placed fifth in his age group at SA Champs in 1999. “You think you’re fit when you play rugby – then you sign up for a triathlon and realise how far you can push yourself.”
As his career progressed, Tobie found he didn’t have enough time to compete in triathlon anymore. He moved to the UK and turned his attention to cycling. “That’s when I really started cycling seriously – and I’ve been cycling for a good 21 years now.”

“One thing that I’ve noticed as I’ve gotten older is the body conditioning aspect. The guys who only start cycling in their 40s and 50s don’t have that muscle memory. But if you push through and train hard for two or three years, it starts paying off, and you start to reap the benefits of that muscle memory when you take time off. For me, I can take a few weeks off and it’ll take me five or six rides before I get that fitness back – provided I don’t pick up much weight during the downtime!”

Prepare
Tobie adds balance to the chaos with preparation and routine. “A lot of people underestimate what a long-haul flight does to your body – even if you’re in business class – so you have to be prepared before you fly.” This includes making sure that his seat is pre-booked, his in-flight meals are pre-ordered and his compression clothing is packed in his carry-on when he boards.

In the lead-up to a big travelling block, Tobie makes sure that he trains hard to give his fitness levels an extra push. “I know that even though I’ll keep training while I travel, I won’t be able to push it quite as hard as when I am at home,” he says. “The day before I fly I try to do an hour-and-a-half-ride or a tough spin class, and then the day I arrive, I take it easy, sleep properly and get acclimatised.” 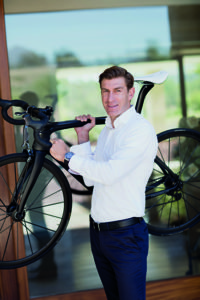 The next morning he’s up at 5am to go to the gym for a spin class or gym routine. “Crossing multiple timezones really takes it out of you, and this is where the discipline comes in. I find that a high-impact, interval training-type class really gets my metabolism going and gives me energy and motivation for the day, even though I might be tired from the flight the day before.”

Even if you don’t travel as much as Tobie does, you can minimise the impact of flying on your training schedule by fitting in a workout the day you fly and making sure that you eat sensibly and stay hydrated on the plane. “It takes almost a month of planning to get my work-health-life balance right before a big trip, but if you get all those things right, it has a huge impact on your productivity.”

The Importance of Routine
Successful people know that having a routine is essential for upping their productivity and making space for the important things in life, but having the discipline to do so isn’t always easy. “The best way to stick to your routine is to make your routine easy to stick to,” says Tobie.
“That’s why it’s so important for me to create a routine when I’m travelling. Even with my routine changing on a weekly basis, at least I am in that routine when I’m there. If I’m out of routine I can immediately feel my stress levels rising.”

For this reason, Tobie tries to stay in the same hotels each time he travels and keeps a flat in Singapore, where he spends the bulk of his time while overseas. “I would rather sacrifice a smart hotel room for a well-equipped gym,” he says. “It took me a while to figure out which hotels were best-suited for the sort of training I like to do but it is essential for me being able to hit my groove while I’m travelling. Managing my stress is as much about having the time to exercise as keeping the routine that allows me to exercise.”

When he travels to the Middle East – where he’ll be travelling between three countries in four days – he knows the hotels where he is staying and where the spin bike is in each hotel. “It’s just having that self-discipline to get up and get into the gym and knowing what to expect makes it that bit easier.”

“Now that I have my various set-ups around the world it’s just a question of plugging and playing when I travel. The more you do it,
the more it becomes second nature.”

Eating Right
When we are tired or stressed, our bodies release the hunger hormone ghrelin which stimulates appetite and determines the rate at which our bodies use energy. For someone who travels as much as Tobie, tiredness and physical stress – and the hunger pangs that go with it – are something you have to watch out for.

“People call it diet, but I just call it eating right,” he says. “You can cut out carbs or white bread or whatever it is, but staying healthy is a matter of not eating rubbish like preservatives, or flavourings – and sugar is part of that. Eating healthily is for life, not for a six-to-nine month period so you have to be realistic.”

Tobie believes that it’s not about eating all of the right things all of the time – it’s about saying no when you have a healthier option available. “If you don’t put poor quality food into your shopping basket, it won’t be in your cupboards, and you won’t be tempted to eat it at home. ” 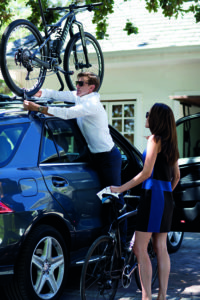 Although Tobie has reduced his carbohydrate intake over the years, he doesn’t cut them out completely. “If you train a lot you have to have carbs for energy but you have to have the right carbs. I don’t starve myself and I love pizza and ice cream – but only as a treat. If you’ve been training really hard, I think it’s okay to reward yourself. Sometimes that is the fuel that your body needs.”

Balance
All work and no play makes Jack a dull boy, but it also makes him less productive. Tobie knows that he is happier and works better when his body and spirit are as much of a priority in his life as his work. “It is so important to have a break from work to clear your mind,” says Tobie. He makes the best of his job’s flexibility to ensure he has time to work, train and still spend time with his family. “I’m on the road so much that it’s really crucial that I manage my day so that I can spend time with my family. It’s important that when I’m here, I’m here for the family as well.”

“When I’m home in South Africa, it’s a bit different because so much of my work happens in Asian and Middle-East timezones. I’m normally up at 5am and do two hours of work in the morning and then go for a ride at 7am until 9 or 9.30, and then get back and work the rest of the day.”

“Exercise takes your mind off everything. You can just feel your stress levels are right down when you finish a gym class or a hard ride. You walk out of there and you feel relaxed and energised.”