Toyota GR Supra: A Thoroughbred Sports Car Performance Enthusiasts Have Been Waiting For

An exhilarating blend of power, agility and precision handling – the Toyota GR Supra is not just a revival, it’s a reinvention.

The Supra of the 90s is a curvy, musclebound coupe that takes corners with conviction. Its performance, coupled with a nostalgia-inducing aesthetic and iconic spoiler, have made the car a coveted ride among the world’s diehard motorheads.

Building a modern version of this legendary vehicle, that could not only live up to the ethos of its predecessor but carve its own lane among the myriad of sports cars available, was always going to be a tall order – but ultimately, an even greater honour.

“Being asked to make a sports car that offers the ultimate, pure driving pleasure felt like a mandate from heaven,” says Tetsuya Tada, Chief Engineer of the Toyota GR Supra. His brief was to deliver a car that offers a seemingly limitless sense of control, a car that would meet the expectations (or beat them) of even the most hardcore fans. The first step: go to the source.

Tada visited Supra enthusiasts’ clubs to speak to owners of older models to find out what makes the Supra special. The response was always the same: “a straight-six turbo front engine and rear-wheel drive configuration”. It was clear that he would have to retain those core elements, but he was also certain he could build a new car on that foundation that paid homage to the original but revved up to a driving experience like no other.

During development, he told his team to hone any aspects of the car that would stimulate the driver’s sense or instincts.

“It wasn’t necessary to achieve perfect scores in every aspect, we just need to make sure the car is fun to drive,” he says. “Anything that goes against that can be disregarded.” 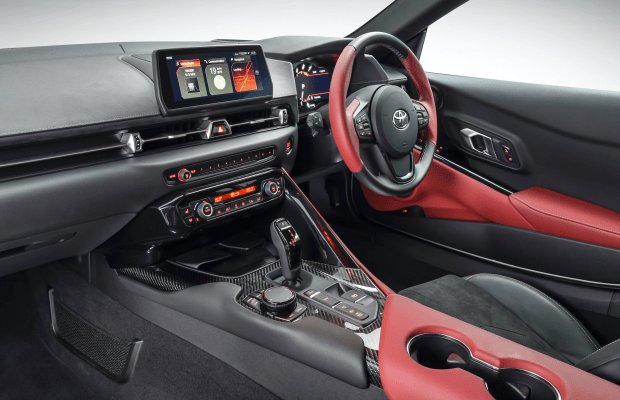 That commitment to a pure, adrenalin-inducing driving experience has resulted in the Toyota GR Supra. It’s distinctive look is a nod to its rich heritage. Front and rear styling echo the energy of the legendary fourth generation Supra, while the long bonnet, compact body and double-bubble roof pay homage to the 2000GT. And those resemblances aren’t just skin-deep.

“ A car that offers a seemingly limitless sense of control.”

True to form, the Toyota GR Supra packs a punch. It features the same classic sports car format of a powerful, frontmounted six-cylinder engine and rear-wheel drive as its celebrated predecessors (albeit a monster 3.0-litre version available in two grades). But thanks to modern innovations – namely a single twin-scroll turbocharger, highprecision direct fuel injection and continuously variable valve control – the engine feels powerful, well-balanced, smooth and free-revving. It all adds up to an exhilarating acceleration feel (with minimal vibration!).

The driver’s cockpit in the new GR Supra, combines sportier elements with ultramodern (and ultra-convenient) functionality. Every fixture is designed to help you focus on the driving experience. The low, slim horizontal dashboard maximises your view through the windscreen, helping you position yourself – even at high speeds. Controls are tightly grouped for quick and easy operation, and the instrument panel, door trim and centre console blend together as part of a seamless design to give the cockpit a strong, unified feel. 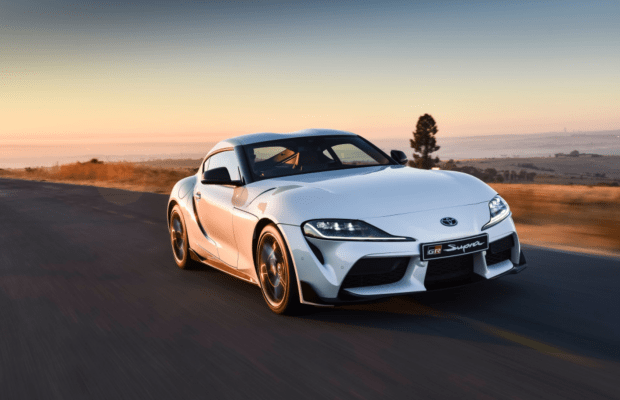 The car has been designed to put the most important elements – the paddle shifts, heads-up display, etc. – directly in front of the driver (you’ll find additional switches located on the threespoke steering wheel).

Bottom line: when you get behind the wheel, there’s no denying you’ve been handed the reins of a real, unapologetic sports car. But that doesn’t mean you won’t be comfortable. From the racingstyle seats featuring side bolsters to the dual-zone automatic air conditioning to the Bluetoothconnected 10-speaker JBL sound system, the lightweight Supra hasn’t ditched modern luxuries (or safety features) to engineer its unique driving experience.