Alfa Romeo’s first attempt at a SUV is a pure showstopper with few negatives.

Alfa makes incredibly sexy cars. Fact. You can’t dispute their pedigree in making cars that are runway-worthy. Unfortunately, they also have another reputation – historically, they tended to fall apart quicker than a Brexit proposal. The Alfa build quality and after sales service have had a checkered past – and not checkered as in the finish line flag. But the good news – that seems to be changing for the better. Where I live, there’s a black Alfa Romeo Brera in mint condition – and in my opinion, it’s one of the most beautiful cars ever made. A good friend of mine drives a Giuiletta – also Zoolander-level good-looking (the car) – and of course, there’s the new Giulia, which we haven’t driven yet, but is also spectacular visually. 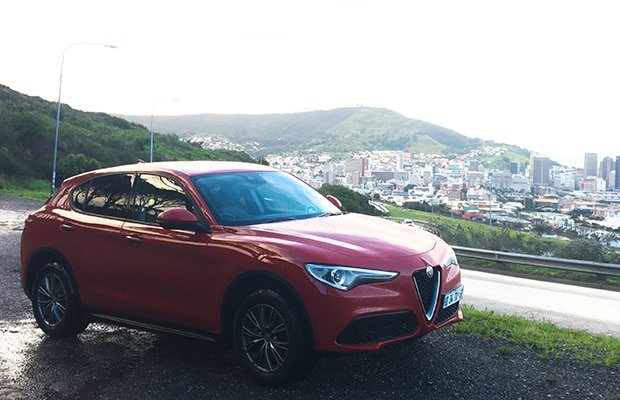 So – this Turin-based car company has been crushing it design-wise lately, and yes, this Stelvio is visually scintillating from every angle. But how does it drive? Well, it breaks rules. A family SUV should not, in terms of physics and all things rational, drive as well as this. It is incredible. It corners, handles and accelerates like a hot hatch; the slick 8 speed auto transmission sends power to all four wheels, but crucially, it’s rear-wheel driven only until the front wheels lose traction. Add to this mix the following: fast, driver-focused steering; an excellent 50/50 balance of weight; a cleverly-designed chassis; and an outrageously good engine. It uses the same Giorgio platform as the Giuilia, which is a good thing, and it uses carbon fibre and aluminium parts to provide a relatively impressive kerb weight of only 1 775kg.

Just make sure you keep it in Dynamic mode to get the best out of this Italian beauty, and don’t spend too much time on the rough stuff – this excels on tar. And to make things a little more confusing – or amazing, depending on your personal wealth – the bonkers Stelvio Quadrifoglio will soon be available. It’s the ridiculously powerful version with the four-leaf clover badge (375Kw and 600Nm, 0 to 100 in 3.9 seconds) and it holds the production SUV category lap record at Nurbringring, so fast doesn’t accurately describe just how rapid it is. Sadly, it’ll probably retail at around R1.8 million.

The Stelvio is named after one of the highest mountain passes in Italy, and for good reason: they’ve aimed high with this model – and thankfully, the Italians have delivered. Yes, you can choose the German and British SUV counterparts as safe investments, but they won’t offer this level of driving enjoyment and the head-turning looks – at least not at the same price tag. However, due to the conservative nature of our market and varying buyer motivations, it probably won’t sell in the same numbers as those peers do, but we’re wholehearted fans of this newcomer, especially considering it’s Alfa’s first bash at a SUV – it offers the best performance and engine for the money.

WHAT WE LOVE: The first performance SUV from Alfa Romeo is an instant classic, and combines supermodel looks with champion performance.