When rugby giant Siya Kolisi’s brother and sister were taken away by social services, he vowed to bring them back home. This is how he found them, and learnt to be a father.

She had no idea who Siya Kolisi was.

This nervous little girl, inching towards him with childlike curiosity, moving leaden feet in slow, tiny steps. Her face was an innocent mixture of confusion and awe.

Siya was the older brother she had never met.

A man, almost myth, who she boasted about on the playground. “He plays rugby, for a really big team,” she would sing. And now he was sitting there: relieved, elated and startled that his search was over. He had finally found his brother and sister.

She paused. She reached out a small shaking hand, her fingers spreading over Siya’s face, the tips checking if he was real. Another breath, and then she jumped into his lap.

“She started hugging me, and I knew – I knew right then that there was no way I was leaving without them,” says Siya.

Growing up in the Zwide township in Port Elizabeth, Siya Kolisi learnt a few things.

First, a plate of food was a rare sight. Often he lived on an empty stomach, barely getting by on the small jam sandwiches served up during break times at the local primary school.

Second, you didn’t need a lot. While his friends played with toys, he would drive a brick around the dusty yard outside of his home, content that his imagination would fill in the blanks.

And finally, he was happy. “This is just what I knew, and I remember just being very happy,” he says. “I didn’t have much, but what I had – it meant the world to me.” His father was in Cape Town. His mother was in the periphery. He was left to live with his grandmother, aunt and uncle in a cramped four-room home in the burgeoning settlement.

Siya slept on the floor, laying out couch pillows to form a bed. He survived on water and any food his grandmother could find: vetkoek served up at tea with her friends or the deflated plastic bag of groceries she was able to afford when the money was there.

While he tucked into his small suppers, she would go hungry. “She never complained; she looked after me and she did anything she could for me,” he says. When she fell ill, he lapsed into a small state of panic. The rock of his life was crumbling and now the roles were reversed. He would bunk school to take care of her: washing her, feeding her, making sure she had water.

“She was everything to me: my parent, my best friend,” he says. He was at home when she collapsed in the kitchen and died in his arms. He remembers running outside and pleading for help, asking, in the final moments of his childhood innocence: “Is she dead?”

“But I’m glad I was there, that she didn’t die alone,” he says. “Always, I wish she was here right now, to see what I have made of myself. I wish I could repay her for what she gave me. For the advice, the inspiration; for all the days she put me ahead of herself and suffered so that I could be what I needed to be.”

Siya didn’t have much. What he did have was a selfless example of what it meant to be a real parent.

Despite running on fumes for most of his childhood, Siya Kolisi was a rising sports star. He had prowess on the pitch, and people were starting to take notice. He was accepted into Grey Junior School on a bursary, and the boarding school kept him warm, fed and housed.

He would return home on the weekends, swapping his comfy quarters for his old spot in the living room. There was a sharp contrast in the duality of his life at this point – the extreme poverty and bric-a-brac township juxtaposed against the manicured lawns and stiff architecture of his school grounds. But he still looked forward to slipping back into the familiarity of his old four-roomed home.

It was during these visits that he learnt he had a brother, and later a sister. Two children he would see in passing, swapping quick hellos or just a wave. That was before his mother passed away, and his siblings were taken in by social services. And in an instant, they vanished.

Even as he joined rugby’s big leagues, proving himself on the field, catching the eye of talent scouts and provincial coaches, their disappearance felt like a heavy weight on his conscience. “I would dream about my mother.

During the off-season he would jet off to PE and start searching. He scoured the township, interrogating extended family and knowledgeable strangers. But he always returned to Cape Town empty-handed.

“One day our team was playing in PE,” he says. “But I didn’t get picked. I was sick, and fortunately I had my car down from Cape Town, so I decided to take a drive to the township.”

He coasted around Zwide, turning down narrow roads and winding between a maze of shacks and homes, his tyres kicking up dust, and his internal compass following nothing but a glimmer of hope that he’d find a sign, a sighting, a signal to keep on searching. That’s when he spotted a distant cousin on the roadside.

“I remember he asked me: you’ve seen your brother and sister, right? I said no.”

But excitement was surging through him. And the next moment he was being led to their new home, opening the door and hugging his brother. “I couldn’t believe it. It was this crazy coincidence,” he says, laughing. “There he was, my brother, and there she was, my sister, right there standing in front of me.”

Sitting there with his siblings, Siya knew they were coming home with him. He was just 23, a young guy with an outgoing personality and a promising rugby career to think about. A man who already had a kid on a way, now choosing to be a father to two more. 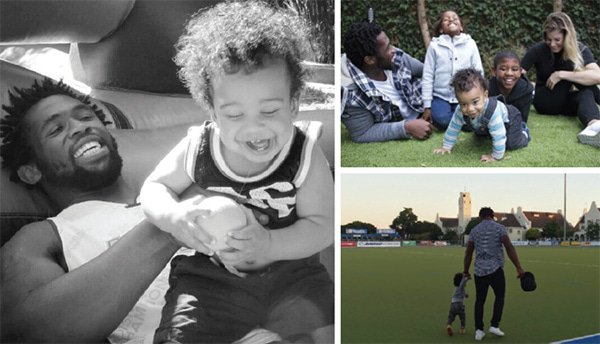 You Have What It Takes

Being a dad isn’t easy work. With two wide-eyed, excited but slightly apprehensive kids in his home, and a new-born infant to think about too, Siya felt like he was out of his depth.

He watched as his fiancé, Rachel – who had, without a second thought, quit her job to look after their new family unit so that Siya could pursue his dream on the field – adjusted to being a mom. He was barely treading water.

“It came naturally to her,” he laughs. “I think because she’d been carrying baby Nick all that time. Me, on the other hand – yeah, that took a bit longer.”

In his own words, he used to be outgoing. Friday nights were for partying and kicking back with friends. Weekends were for browsing fashion aisles and killing time in trendy cafés. And did we mention he was just 23? In a single moment he had to rip off the Band-Aid, accept that those dog days had passed, accept that there were three little lives depending on him now, and accept that he was a father.

“When I managed that,” he says, “that’s when I started to feel true happiness.”

Siya had always known he wanted to have his own family, an aspiration that first took root during his impoverished, fatherless but happy childhood. Knowing that, he was confident, even when he erred and um’d, that he would find his way there eventually.

With Rachel’s support, her unwavering belief in his ability to be a father, and her sacrifice which allowed him to make mistakes along the way, Siya made the transition. With her help he navigated his way around balancing house rules, bed times, movie nights and church trips.

His sister has warmed up to him, his brother is now his best friend – and these flourishing relationships are frozen in snapshots spliced squarely between bright images of his rugby career on his Instagram. He filed papers, fielded phone calls, and sat in queues to finalise the adoption process.

Through it all, he’s discovered that what he wants most in the world is to be a great example to his brother and sister, and to his son and daughter. That when they look up, they will see what a real man should look like.

“Their role model should never be another kid’s dad. I want to be their hero.”

UPDATE: Since this story was originally published in Men’s Health, Siya has legally adopted his siblings, Liyema nad Liphelo. A legal process that took 18 months.