3 Lessons Every Man Can Learn From Batman

The first photos from the new Batman movie were recently released. The movie, set to hit cinemas in May 2016, is said to be called something along the lines of “Batman versus Superman,” it features Ben Affleck as Batman and Henry Cavill as Superman.

Even though there’s a new Batman in town, lets not forget about the amazing Christopher Nolan trilogy and perhaps learn something in the process.

Surround Yourself with Brilliant Allies

Alfred: I’ve sewn you up, I’ve set your bones, but I won’t bury you. I’ve buried enough members of the Wayne family.

We can’t all be super rich, or possess futuristic military technology and world class martial arts skills. But we can all have friends and family who will do anything for us.

There wouldn’t be a Batman if it wasn’t for Alfred Pennyworth and Lucius Fox. Although, as men, we often think we can leap all our tall buildings and save our little worlds by ourselves, no successful man is an island.

“If you want to achieve success on your expedition, at first only your family and friends will believe you can pull off a crazy idea, and they’ll be the only ones to back you. They’ll never let you down and it is through them that you will acquire the contacts to make your idea a reality…. Then get off your ass and do it,” says Men’s Health’s Game Changer: Mike Markovina

Friends and family are your ultimate allies. Make sure you invest in yours. Feeling distant from your child lately? Read: 4 Signs Your Job Is Messing Up Your Kids and 8 Lessons All Dads Should Teach

Henri Ducard: Your compassion is a weakness your enemies will not share.
Bruce Wayne: That’s why it’s so important. It separates us from them.

Yes, men are allowed to have emotions. In fact – like Batman – emotions are one of our most powerful weapons. In The Dark Knight Rises, Bruce Wayne has to climb a treacherous wall to escape a prison located at the bottom of a pit that Bane placed him in. To make it out of the prison, he must make an insane – seemingly impossible – leap from one ledge to the next. He does however have a safety rope attached, which means he won’t die if he doesn’t make it.

He fails to make the leap.

“You do not fear death,” says a blind prisoner later. “You think this makes you strong. It makes you weak,” he says. “Why?” asks Wayne. The prisoner responds,” How can you move faster than possible, fight longer than possible without the most powerful impulse of the spirit: The fear of death.”

Wayne makes his next attempt without the help of a safety rope. Of course, he makes it.

Wayne has been able to be Batman because he feels. Whether it’s anger at how corrupt Gotham is, or the passion of standing for an ideal. Batman uses the emotions to get up, and keep getting back up.

“Clichéd or not, pick something you feel passionate about and the rest will take care of itself is a mantra that I feel holds true,” says Men’s Health Game Changer: Robbie Burrell

Although most of us get up in the morning because we have to go to work, it takes a special sort of dedication to get up earlier in order to go to gym, or study for that part-time degree. You’ll never beat the alarm clock unless you harness your passion. 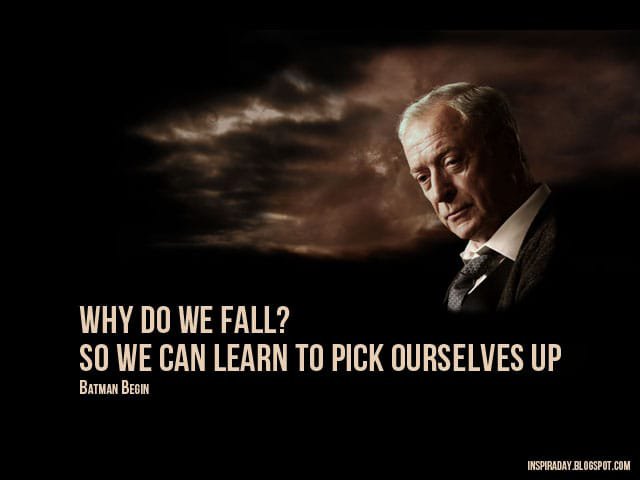 Have A Plan. If It’s Crazy, You’re On The Right Track

Bruce Wayne: [as Alfred opens the curtains] Bats are nocturnal.
Alfred Pennyworth: Bats may be, but even for billionaire playboys, three o’clock is pushing it. The price of leading a double life, I fear. Your theatrics made an impression.

When Bruce Wayne decided to become a superhero in Batman Begins, He dressed up like a flying mammal and spent large amounts of time in a cave as part of his plan to fight evil.

He had a plan, but not a conventional one.

“I was always called crazy at the time. That’s how I know that I’m doing something interesting and that there is big opportunity. Everything that’s well understood and established, those things have been commoditised, the opportunity has already gone. If you are looking to do something big or disruptive, it’s good test,” according to Men’s Health Game Changer: Justin Stanford, who quit school to start a business, when it failed he started another one, when it failed he started his third – this time successful – business and bought an Aston Martin at age 23.