Special Report: The Salt In Your Diet Could Kill You – How Much (Or How Little) Is Healthy?

You probably know this already, but we recommend taking (most) media advice on nutrition with a pinch of salt. Case in point: in the last 18 months, global news outlets have stated, quite dramatically, that the salt in your diet is going to kill you. And then they’ve proceeded to see-saw on whether you’ll die from an excess, or from not having enough.

Related: How to Detox Your Skin After Overdoing the Alcohol, Sweets, or Salt

“Heart Attacks Could Be Caused By Too Little Salt, New Study Shows”, read a Daily Mail headline from early 2016. Just 15 months later, the same newspaper published a headline stating almost the exact opposite: “Just Two Teaspoons Of Salt A Day Damages The Heart”. Classic clickbait, right? Not really. They’re both true. One statement is just more probable than the other; and only one of them is worrying the world’s top nutrition experts.

How much is healthy?

First, you should know that it’s almost impossible to consume too little salt. This is according to dietician and exercise physiologist Gabriel Eksteen, the nutrition science manager for the South African Heart and Stroke Foundation, who also has extensive background in working with chronic kidney disease. “We need roughly 1g to 1.5g of salt per day,” he says – adding “less than 5% of people globally are at that level.” In fact, research from Journal of Nutrition, Metabolism & Cardiovascular Diseases shows the average South African consumes between 6g and 11g of salt per day, significantly more than the World Health Organisation’s recommended upper limit of 5g (or one teaspoon) – although other countries, such as the US and the UK, have a slightly higher upper limit, at 6g. Eksteen says the recommended range for salt intake should be between 1.5g and 6g; what he sees in reality is that “most people eat a lot more than that. The average global range is between 9g and 12g; so, loosely speaking, we eat double what we should.”

Related: Here’s How Your Earlobes Can Tell You If You’re At Risk For A Stroke Or Heart Attack

This salt comes from three sources: there is natural salt in most foods, particularly in dairy and meat, which makes up a very small percentage of salt intake; then there is the salt in your food supply, which is added during the manufacturing or processing stage, and which can’t be removed – the salt used in baking bread, for instance; and finally, there is discretionary salt – this is the salt you add yourself, while cooking or at the table. “How these make up your salt intake really depends on the way you cook, if you eat mostly ‘clean’ or readymade food, if you live in a rural area or in an urban area… but in a typical modern diet, 85% is already in what you’re eating, not what you’re adding,” Eksteen says. And because we’re so used to salt in pretty much everything we eat, our palates are becoming increasingly desensitised to the taste.

“Salt has been creeping into our diets for decades [through processed foods]. We’re so used to it that foods we don’t even think of as salty are full of salt. “Bran flakes, for example,” says Eksteen. “You can get a quarter of your day’s intake of salt just from what you think of as ‘sweetened’ breakfast cereals.” Another culprit, he adds, is the amount of bread typically eaten by South Africans. Just a few slices can provide a third of your daily limit. Because of this, a few years ago South Africa became the first country in the world to develop legislation to introduce mandatory limits on the levels of salt in processed food. The first stage of the new law came into effect in June last year, with a second – and more strict – set of limits to be put in place in 2019. Eksteen says the net effect of this will be to cut average salt intake by more than 1g, which “seems like a small step, but is very important”.

Related: These 5 Foods Are Hiding Dangerous Levels Of Salt And No, Chips Aren’t The Culprits Here

The reason for this, Eksteen says, is the direct link between salt intake and blood-pressure levels. “There are lots of studies on salt,” he says. “The most interesting are probably the primate studies. They eat no added (or very little) salt, but we can sneak salt into their diet. As their salt intake goes up, their blood pressure goes up, in a linear way. “You can see the same in [human] populations in remote areas,” he adds. “There is a very clear relationship between salt and blood pressure.” Why this presents a problem is because higher blood pressure puts extra strain on your vascular systems (your blood vessels, and ultimately your heart muscle). If your blood pressure is too high on an ongoing basis, “it tires the heart out, damages the vasculature system (or the blood vessels), and causes heart failure.”

A recent Key Indicator Report published by Stats SA shows that around 44% of males aged 15 years and older have hypertension (high blood pressure). After the age of 45, this jumps to two-thirds of all men. A lesser-known knock-on effect of the same issue is that high blood pressure damages your kidneys. “Kidneys also need pressure, because they filter out waste products against that pressure,” says Eksteen. “There are very small arteries in the kidneys, and if they are exposed to high pressure, it damages them.” Eksteen says that in South Africa, about 65% of kidney disease is a direct result of hypertension.

“Salt is just one part of the blood-pressure problem – it’s definitely not the whole picture,” he adds, explaining that it’s important not to get worked up about a single nutrient. Blood-pressure issues are caused by a number of factors, including genetic predisposition, and – unsurprisingly – the other foods you eat. “There’s a relationship between sodium intake and potassium intake,” says Eksteen. “If you consume higher amounts of potassium, then it can attenuate [what the sodium is doing to you], to some extent.”

You can increase your potassium intake by adding more (fresh) fruits and vegetables to your diet, Eksteen says – seeing as a recent study shows that 91% of South Africans don’t meet their daily potassium requirements! Other hypertension factors that are important to consider, he continues, include “exercise [good], and high stress levels [not good]”. But why salt intake may be key to solving the problem is that it’s an easy behaviour to modify, with immediate positive results. Reducing salt intake to recommended levels can improve your systolic pressure by 5 points in the healthy direction. Being fit, eating more fruit and veg, and eating more dairy can similarly nudge your blood pressure in the right direction.

The key to implementing a salt-reduction regimen is to “be sensible; don’t fall for the scare tactics”, says Eksteen. If you’re eating what the average South African does right now, it’s unreasonable to expect that you’ll be able to halve your salt intake overnight. “The first thing you need to know is that you’re programmed to eat a lot of salt, so you need to decrease this gradually,” he says. “Your tastebuds need time to adapt. “Start with one thing. If you use salt at the table, that’s the easiest place to start: ask yourself if you actually need to add more to your food. Taste it first, before adding any salt, and work backwards from there. “Then ask yourself, what are you doing when you are cooking with salt, or salty ingredients such as stock and sauces? You can also add more acidity, vinegar, and more herbs while you’re cooking. This adds different flavours with less salt, and in this way you start sensitising your body to having less salt.”

Eksteen says it’s also normal to have the odd pizza or boerewors roll, and that he’s “a big fan of offsetting one meal against another”. So: balance out a meal you know will be high in salt with a healthier one that has very little. Or, if you’re braaiing, “think about the side dishes”, says Eksteen: upping your intake of fruit and vegetables with healthy sides can balance out some of the potential salt damage (of course, then you have to watch out for high-salt or high-sugar dressings and sauces on your ‘healthy’ greens). 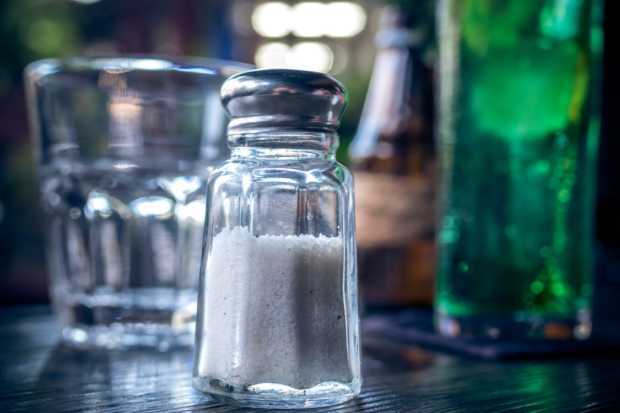 Water and salt intake go hand-in-hand, says nutritionist Gabriel Eksteen, and high salt intake can disrupt your body’s ability to regulate not only its fluid, but also certain hormones such as aldosterone. But this doesn’t mean you need to over-hydrate when you burn kilojoules. Eksteen says that for most athletes and regular exercise fans, the amount of sodium you’re likely to lose if you’re sweating for an hour or two is very small, “and you probably still have excess salt. You lose more water, and less salt, because salt is hypotonic.” For athletes doing half marathons and upwards – which Eksteen describes as being “90 minutes [or more] with significant fluid loss”, salt can aid in the absorption of fluid and glucose intake (though he cautions that athletes should also watch for overhydration). This works because when salt crosses the GIT barrier, it facilitates the movement of glucose at the same time. Energy drinks, Eksteen says, typically have very little salt, and so endurance athletes may want to take in extra salt as they perform. But, he adds, like most people they too “probably still have an excess salt intake” outside of exercise, so they should still make sure they’re not inadvertently doubling up.

Food labels, typically, don’t make it easy to understand… anything, really. And salt is even more complicated, with most manufacturers only providing sodium content on labels – which isn’t exactly the same as plain salt. “In bread, for example, sodium bicarbonate adds to total sodium,” explains Eksteen. If you want an approximate idea of how much salt is in a food item, you can multiply the sodium (Na) value by 2.5 – but then you still need to relate that back to the size of the portion you’re eating. As a rule of thumb, says Eksteen, “if an item has less than 120mg of sodium [per 100g], it’s considered lowsodium food, and it’s not really going to contribute much to your total daily sodium intake.” Above 900mg of sodium is high – but again, portion size matters. A pinch or a teaspoon of a high-sodium food, versus half a kilo of a lower-sodium food, might mean the latter contributes way more to your total intake.