It might be a ball–ache, but going for your check up could save your life

“Last week, I had cancer. This week – I’m clear. “one night my wife and I were ‘wrestling’, when a sharp pain seared through my body. It felt like a blow straight to the gonads. It felt as though my better half had literally punctured my nut. The pain was so intense we had to stop. “It wasn’t just disappointing – it was a little alarming. I decided to track down a pro to look at my bits: a medical professional, that is. 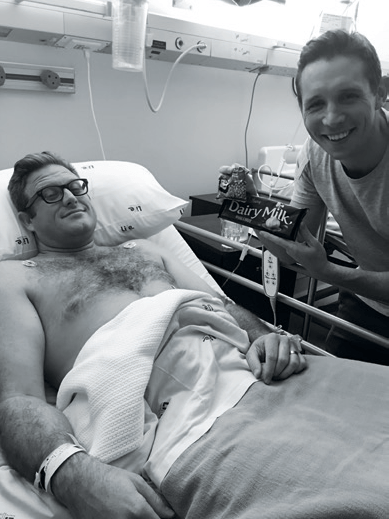 This wasn’t the first sign I should have taken seriously: at one some point my right nut had adopted a little bump. When I first noticed it, I shrugged it off and thought to myself, ‘Who am I to judge what they do. If they want to change a little, it’s up to them’.

“Also, after fathering two kids, three years ago, I got the snip. I love my kids more than anything, but I realised there was only so much joy I could fit into my life. I decided it would be better to separate parts of my body with a sharp instrument than have more… joy.

Anyway, I felt fairly sure the lump was due to the vasectomy. It didn’t occur to me that the other nut would also have had a bump if that was the case. “I was dreading going to the GP. I felt awkward and embarrassed. Until my wife reminded me of the fiddling and prodding women have to go through when they go for checkups. Compared to a pap smear, she reassured me, this was tame.

Man up and sort it out. I was pretty uncomfortable, but it was over in a few minutes. Much to my surprise, the GP sent me to a specialist immediately. “The urologist appointment went something like this ‘Hi Mr Laubscher, let’s have a look at your testicle with this ultrasound scanner’. Literally a minute later, he said, ‘okay, so we’re going to remove the nut. “I thought it was all a little drastic but he assured me everything would be fine. I had some tumour marker blood tests done, and waited a week for the operation.

Related: Why You Should Examine Your Testicles Every Month – And How You Should Do It

“Lying on the table as they administered the anaesthetic, I remember the nurse asking which side they were removing. I panicked, giggled a bit, but before I could answer, I was out cold. Of course, the first thing I checked when I woke up was whether they had removed the correct nut. They had. “I waited ten days for the results from the biopsy. Nonchalantly, the urologist told me I had cancer. I felt alright at first, but when I left his rooms and saw my wife, I burst into tears telling her. It’s very overwhelming to tell the most important person in your life that you have a disease that people die from. I had recently lost a friend to cancer; and like everyone, have many loved ones affected by it. It was tough to hear. I did reassure her, as the urologist had reassured me, that the survival rate was more than 99%. Even that didn’t feel consoling at the time. The pain from the operation was pretty intense; and the battle in my mind was life-changing.

It was emotionally traumatic. I started making plans to sort out my estate. I made sure I was with the kids more. My wife and I grew really close, because we rubbished everything that wasn’t important. All I wanted was to be there for my family.

Related: Do You Have Testicular Cancer?

“When I went for my first blood tests and a CT scan post-op, I was very nervous. But because the cancer was caught early and I was operated on, the tests showed I was now cancer-free. As suddenly as it all happened, it all went away. “I will have to go for tests for the next five years, intermittently, but I feel great – thanks to the diligence of the doctors, and because I caught it early. And it’s not the worst thing to check for (either alone or with a friend).

I would like to urge you all: check your balls, and go and see your doc if you think anything’s out of the ordinary – it saved my life.”

What you should know

Testicular tumours usually present as a nodule or painless swelling of one testicle. Other signs include change in weight of one testicle; lower back pain; a collection of fluid in the scrotum.

Check your balls regularly. Have a bath or shower to relax the scrotum. Check for swelling under the skin. Roll each testicle between your thumb and finger. Feel for something that feels different to the rest of the testicle or the other one. If you are in any doubt go to your GP.

Dylan had a radical inguinal orchiectomy: standard for when testicular cancer is suspected. The entire testicle and spermatic cord is removed through an incision made in the groin.

The emotional trauma of a cancer diagnosis can be very difficult to deal with. Talk to a friend who may have been through a similar thing. Dr. Google can freak you out, but the internet can also be a way to find support. Try bustinyourballs.org, cansa.org.za or za.movember.com