An Hour Of Running May Add 7 Hours To Your Life

Researchers crunch the numbers on the health benefits of running

Over the last few years, running has gotten some bad press—suggestions that anything more than a gentle jog will damage your heart and send you to an early grave, and so on.

So I’m here to spread a little good news. A review paper published in Progress in Cardiovascular Diseases takes a hard look at running as “a key lifestyle factor for longevity”—and concludes that it stacks up pretty well. Importantly, the authors aren’t just a bunch of running boosters: Iowa State’s Duck-chul Lee and New Orleans cardiologist Carl Lavie, in particular, have co-authored previous papers that raised questions about the dangers of too much running.

Related: Running For His Life: The Survivor (Better Man)

Much of the evidence that they review is familiar to those who’ve been following the debate. Basically, large-scale epidemiological studies suggest that the biggest health benefits come from very modest amounts of running.

But there are some very interesting additional insights and analysis. For example, how much extra life does running grant you? Holding other factors equal, they get a relatively consistent estimate of about three years of extra life from several different studies. Interestingly, those benefits are nearly as big even if you start running relatively late in life.

Hang on, you say—what’s an extra three years if I have to spend basically that much time running? Well, first of all, I’d say that running is often very pleasurable, so I’d be more than happy to take “extra” life even if I had to spend it running.

Related: Here’s What Running Really Does To Your Knees

But your math is off anyway, as the authors of the new review point out. If you were to spend 2.5 hours a week running for 50 years, you’d still only spend 0.74 years running. On balance, they conclude, every hour of running gives you seven extra hours of life.

(That, again, is for relatively small amounts of running. The marginal benefit tails off as you ramp up the mileage. Then again, if you’re logging 100 miles a week, you’re presumably doing it for some ulterior motive—like, again, enjoyment.)

To assess how running stacks up against other big determinants of health, they calculated the “population attributable fraction” of a variety of health risks for premature deaths in a sample of 55,000 people. For example, according to their figures, if all smokers stopped immediately, that would prevent 11 percent of premature deaths. If all overweight people got their body mass index under 25, that would prevent 8 percent of premature deaths. The second-biggest contributor was high blood pressure, at 15 percent. And the biggest risk factor of all, at 16 percent, was not running.

Related: Improve Your Running By Tightening Your Core In These Three Steps

1. Inactive non-runners, who failed to get the minimum recommended amount of physical activity each week (which, in the units they used, was 500 MET-min/week, which corresponds roughly to 75 minutes of vigorous exercise).

2. Inactive runners, who reported running but whose other forms of physical activity didn’t hit 500 MET-min/week.

3. Active non-runners, who hit 500 MET-min/week of physical activity but didn’t do any running.

4. Active runners, who ran and also hit 500 MET-min/week of other activities.

Here, in graphical form, is how the four groups stacked up. The “hazard ratio” shown is basically the odds of dying of any cause during the study compared to the inactive non-runners; a value of 0.57, for example, means that the active runners were 43 percent less likely to die during the study, all else being equal. 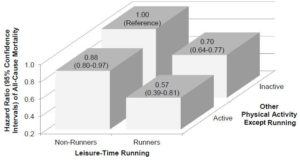 Not surprisingly, the active runners come out ahead of everyone else. But the interesting comparison is between the active non-runners, who had a 12 percent mortality benefit, and the inactive runners, who had a 30 percent benefit. In this particular comparison, running seemed to be a far more powerful predictor of health than other forms of exercise, even when exceeding the recommended minimum.

It’s worth remembering, of course, that if you live by the sword, you die by the sword. When big epidemiological studies were being used to suggest that running is bad for you, I was full of criticisms of the flaws in these data sets. So I should certainly take the same care here to point out the shortcomings of this kind of data—which in the calculations above, for example, relies on self-reported questionnaires to determine exercise levels.

In the end, I’m not seriously suggesting that running is exactly 2.5 times better than other forms of exercise. But it is good to see some encouraging numbers about the health benefits of running.