“If you drink nothing but Primitiv Vodka all night, you won’t have a hang over the next morning!” This is what Dawn Jorgensen told us the first time we met. As unbelievable as it sounds, after visiting Jorgensen’s Distillery and hearing what Dawn’s husband – and ‘Still Man’ – Roger had to say, we can understand why.

During the alcohol-making process, fermentation produces around 15 different alcohols. In wine and beer, these are very diluted and consumed with little negative side-effect (as long as the drink is relatively high quality, that is). The distillation process, however, removes the water and produces only the purest form of the alcohols, many of which are either unpleasant to taste, or poisonous. Luckily, they all have unique properties such as molecular weights and boiling points, which allows the distiller to weed out the bad guys and keep the good guys (ethanol and a couple others with similar characteristics).

The good guys appear in the middle of the scale in terms of molecular weight and boiling point, and are known as the ‘hearts’ in distillation-speak. The bad guys on either side of the hearts are known as the ‘heads’ and ‘tails’. The really nasty ones are the heads, which are the first ones to evaporate while the tails are the ones that give you the headaches – but they also give a lot of the character. This is why, Roger says, if you go on a whisky or brandy binge, you’re likely to feel a lot worse the next morning than if you’d binged on vodka or tequila. The character in whiskies and brandies are contained in a broader cut around the hearts than the purer alcohols. In the case of vodka, greater care taken in the distillation process will result in fewer bad guys being present in the final product. And Roger takes a lot of care. 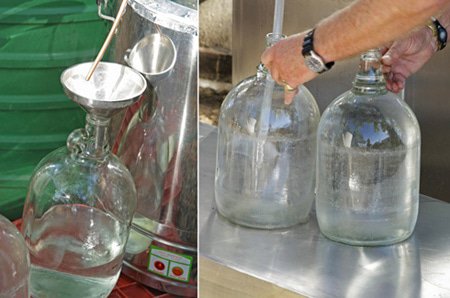 Distilling out the ‘tails’ – the nasty guys that give you a headache if they’re not carefully removed.

Not only care in the distillation process, but also care in sourcing only the finest ingredients for all the spirits Jorgensen’s produces. For the vodka, it’s organically grown spelt from the Cedarberg Mountains (which also gives the premium sipping-vodka a unique aniseed-like taste). For the absinthe, it’s home-grown organic herbs. In fact, most of Jorgensen’s ingredients are organic or wild-harvested and sustainable.

They subscribe to the philosophy of the Voluntary Organic Commitment (VOC), started by Roger and based on the premise that just being ‘organic’ is not enough. It promotes a holistic approach to sustainable food production which looks at taking responsibility for the carbon footprint, waste stream, and packaging of one’s products. While they’re not anti-trade, Roger and Dawn say they are “becoming increasingly locavore” in their business and in their daily lives.

Their production is still pretty small-time (the distillery sits quaintly under an oak tree next to an old barn and they grind the spelt on a hundred year old mill) since they are still in the early days of their spirit-making marriage and loving the romance of it too much to be concerned with ramping up production just yet. Primitiv Vodka was released in August 2010, and in October and November last year they released the lively Naked Lemon limoncello and their mysterious-looking Field of Dreams absinthe. More recently they’ve created a lime liqueur, bay leaf liqueur and an African flavoured gin.

Article courtesy of Food With A Story – Find interesting and ethical food products and services in South Africa.