We have no doubt that the speedster is destined for greatness.

Siviwe “Shakes” Soyizwapi is lightning-fast on the rugby field. Blink, and you’ll miss him. The South African rugby sevens captain started playing the sport when he was nine years old. Back then, it was just an extramural activity; now, the speedster lives for the challenge the game brings with it. “I’ve grown passionate about the game. My love for it has grown considerably since I was doing it as an extramural activity and competing in high school, to now, where I’m doing it as a career,” he explains.

While there’s more pressure for him to perform well now, he takes every game in his stride. “I just take it as another game that I’m playing in my backyard. If you place the other players on a pedestal, it disrupts your focus. Instead, I remind myself of all the preparation I’ve done; and the rest takes care of itself.” 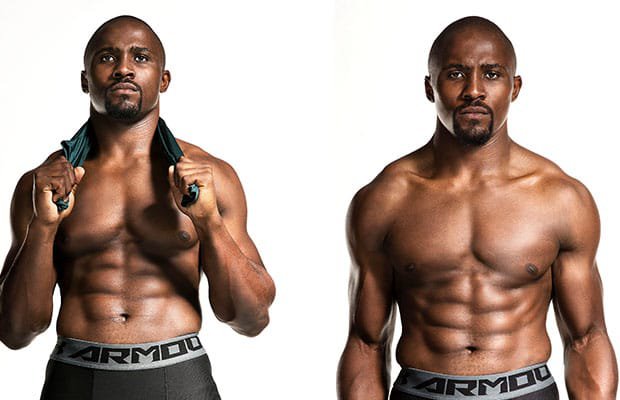 For me, fitness is making a decision to commit to working hard, making sure that I’m in the best shape I can be…

Part of that preparation is staying in shape. Being fit is an essential requirement for playing at the professional level Siviwe’s at. But more than that: fitness is a way he continues to challenge himself.“For me, fitness is making a decision to commit to working hard, making sure that I’m in the best shape I can be, and fitness means testing my limits and pushing the boundaries.”

During the season, Siviwe puts his body through a lot. The team has intense training sessions on four days during the week. These include gym sessions, fitness tests and field sessions, where each player focuses on what’s required of him on the field. “Luckily my body reacts well to the strain I put it under. I’m not injury-prone, but when I do feel some stiffness in the muscles, I work on recovery.”

Recovery takes the form of soft-tissue treatments from the physio two or three times a week, coupled with massages that focus on his quads, hamstrings and calves. On Sundays he likes to go to the sauna, to do a flush-out session. “I’ll go and cycle, sweat, stretch… get into the sauna, and sweat some more.”

Siviwe was ecstatic when he was called to take the helm as captain of the sevens rugby team. Just being on the team is an honour, and being made captain is even more amazing.” The speedster is surrounded by a supportive group of guys who have made it easy for him to take on the leadership role. “It really helps that the players understand their roles, what they have to do to be ready for a game, and what they need to do on the field.” The sevens rugby captain has come a long way since his days on the school field. Back then, he doubted his ability to turn rugby into a career.

Unlike other players, he didn’t represent a provincial side at school level. In fact, he only made his school’s first team when he was in matric. “Things looked like they weren’t going to work out for me,” he says. “But then, suddenly, things changed; and I was called to represent the country on the sevens team in 2016. “I grew up always having self-doubt, not backing myself to be as good as the rest. I’ve come so far since I started believing in myself. Seeing how far having confidence has taken me, and how far I’ve come, makes me proud.”

And now, the sevens captain has taken things a step further. Siviwe was recently named as the first South African to represent Under Armour in their I WILL campaign. He joins the long list of global greats such as Anthony Joshua, Memphis Depay and Mick Schumacher.

It’s our charge to share these stories of inner Will and strive to support our nation, friends and family thrive.

“14 years ago, Under Armour became a household name when the brand asked athletes everywhere to ‘Protect this House’,” says Founder, CEO and Chairman of Under Armour Global, Kevin Plank. “The response in the iconic commercial, and throughout the years, has been the same: I WILL. Today, Under Armour inspires the next generation of athletes to unleash their inner resolve and our I WILL trademark confirms our promise to continuously redefine the future of performance through innovation that will help give athletes an edge.”

For Siviwe, being able to partake in the campaign is an honour and a privilege. “As athletes, we live by a code that not only becomes us, it envelopes every fibre of our 1%. It’s our charge to share these stories of inner Will and strive to support our nation, friends and family thrive.”

Related: Here’s How To Train Like A Super Rugby Athlete Each Day Of The Week

We have no doubt that the speedster is destined for even greater things in the future. We look forward to watching him take the world by storm.