The Zenbook 15 is out to push boundaries.

When ASUS launched the Zenbook 15 (UX534) last year, they were looking to push boundaries: bringing out an ultrabook with a touchpad that doubles up as a screen. Push boundaries they did, and over the last few years, the Taiwan-based company has seriously levelled-up; partnering with the likes of sound brand Harman Kardon and making its premium brand status known.

But do you need a screen on your touchpad? Staffers at the MH HQ also didn’t think so. But that was until we put the Zenbook UX534 to the test. The ultrabook remains a competitive product in its class and is a solid choice if you’re looking for a classy all-rounder. 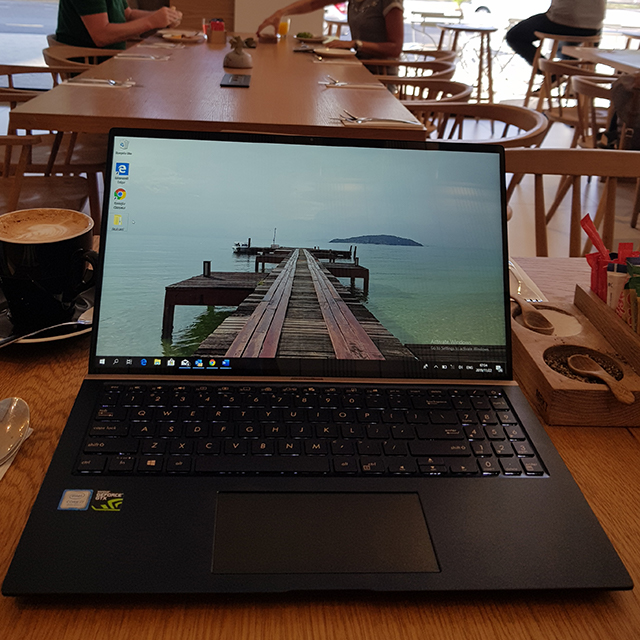 Here’s the 3 things that excited us the most:

For premium ultrabook buyers, quality is key. This Zenbook weighs in at 1.65kg (the anti-glare model is 1.55kg) but despite its light weight it feels bulletproof—and 007 cool. The new Zenbook series has been torture-tested – passing a series of tests designed by the U.S military and has achieved MIL-STD-810G status.

The demanding tests included the UX534 being tested in environmental extremes of altitude, temperature and humidity, in addition to extensive drop, shock and vibration testing. We took it in our carry-ons across the country and were impressed by its die-hard build, despite its glossy looks.

In true Zenbook fashion, the real selling point is under the surface. With an i7 Quad-Core CPU and 16GB RAM, this ultra-portable ultrabook is pretty and powerful. The ZenBook has always aimed to impress when it comes to the office, and that hasn’t changed with the UX534.

The Zenbook 15 is kitted with everything you need for an efficient day at the office – wherever you are; and it’s all thanks to the specs. We edited 4K video and tested a host of Adobe Suite apps on the go; with the UX534 handling the likes of Premiere Pro, InDesign and Adobe Audition seamlessly.

This is also where its 15-inch screen does justice, with ultraslim bezels and according to ASUS, a 95% screen-to-body ratio for near-borderless visuals. It also held its own with games like Monster Energy Supercross 3 when we needed the downtime. All in all, it’s nicely crafted, compact and gives a solid everyday performance.

Related: The Gaming Laptop That Won’t Play Around With Your Budget

It also houses a list of features, which are at times taken for granted, and which allow for an efficient workflow, like Bluetooth 5.0 and Gigabit-class dual-band Wi- Fi 5 (802.11ac) with speeds of up to 1.734Gbps.

Another key aspect which led to an easier typing experience was its ErgoLift Hinge, which according to ASUS, was “designed to automatically tilt the keyboard to the most comfortable typing position. With the carefully calculated tilt improving cooling and audio performance”. A statement we tried, tested and can vouch for.

But the Zenbook 15 is not perfect, however. We found the battery life underwhelming, with the ultrabook having to be charged daily and not living up to its claimed long lasting 14.9 hour battery life.

How The ‘ScreenPad’ Works

ASUS’ touchpad (AKA ScreenPad) that doubles as a screen is futuristic, and speaks to how we’d like tech companies to think going into the new decade. They took risks and for the most part, we’d say it paid off. With the 5.5-inch ScreenPad and with a host of apps at our fingertips, we finally got the hang of multitasking.

Firstly, rest easy. Despite being a multiscreen, the ScreenPad still functions as a standard precision touchpad. That means it still supports the standard host of multi-fingered gestures you’d expect on any other new Windows notebook.

But there’s a lot more you can do on the ScreenPad than scrolling with two fingers. Here’s the functions that stood out:

The above being said, most users are creatures of habit and adapting to the ScreenPad can take some getting used to.