In South Africa we are braai-obsessed, and while that’s a great part of our culture, we tend to stick to the same old prime cuts, we never think to use heart or skilpaadjies on the grill

The Vatican of nose-to-tail eating, it’s Pope Fergus Henderson who brought British cooking to the fore through his use of the offal and odd cuts so integral to traditional food. Henderson’s head chef and disciple, Cape Town local Giles Edwards, is now back in the Mother City and has opened his own place, La Tête (the head in French). Built on the backbone of the skills he learned at St. John, but with a South African filter, La Tête has rapidly earned accolades – including making it onto CNN’s watchlist of the Best New Restaurants of 2017. So what are the benefits of eating the entire animal, exactly? Edwards breaks it down. 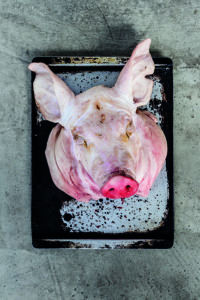 So… offal. Awful, right? Wrong, for several reasons. In terms of its nutritional value, offal tends to be lean, high in protein and rich in vitamins and minerals like iron, copper, phosphorous, magnesium, selenium, chromium, Vitamin A, Vitamin D and Vitamin E. But there’s more to it than that checklist. The more appealing reason your grandparents ooh and aah over liver, tripe or kidneys? Flavour.

“Offal, in my opinion, has the best amount of flavour,” Edwards says. “Ox heart is as good, if not better, than any steak you can have. Kidneys are delicious; you just have to know what you are doing. A lamb’s brain is delicate, and tastes like lamb. You wouldn’t skip the marrow in a chop, so why would you turn your nose up at brain, which is very similar? “In the past, only the older generation, the post-War babies enjoyed a sweatbread or calf liver, but now there are many people originally from rural areas living in the cities. For them to find things like tails and brains in the city centre takes them back to their homes, and the cooking of their grandmothers. At St. John I learned a whole new philosophy about meat.

Related: 5 Ways You Will Start Butchering Meat The Right Way

“In South Africa we are braai-obsessed, and while that’s a great part of our culture, we tend to stick to the same old prime cuts, we never think to use heart or skilpaadjies on the grill. St. John enlightened me in the ways of offal, encouraging us to use the whole beast in its entirety.” 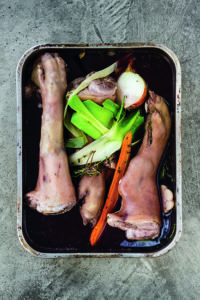 With most of his plates being light on or free of carbs, Edwards’ approach is almost perfectly in sync with Banting-obsessed Noakes acolytes. “I don’t feel that we need to have potatoes and rice on a plate. The dish is a perfect balance between protein and accompaniment. There is no need to put a potato puree or rice on the dish just because. However, I love bread and toast and use it throughout – and it’s also great to use up old bread.”

Related: These Are The Carbs You Can Eat, According To A Dietician

Like many of us, Edwards has had his own battle with an unhealthy lifestyle and a ballooning waistline. The main culprit: post-service beer in London. “After about five years in London I had put on a huge amount of weight – I maxed out at 120kg. I was immersed in the cooking scene, which involves a lot of late nights, drinking, smoking… you name it. There came a point where I realised that if I didn’t take control I would lose it, and also lose sight of my goals. I promptly quit smoking and drinking and started running. “Anyone who does any form of exercise will know that it is just another addiction. You become obsessed. It is also an amazing stress relief, far greater than a cigarette – although nothing quite beats an after-service beer. (Nowadays it’s always a lite beer!) Being back in Cape Town I have the mountain on my doorstep. It’s great to get out there to trail run for an hour or so and just forget all my worries.”

Related: These Are The Best Trail Runs And Ultramarathons You Can Do In South Africa 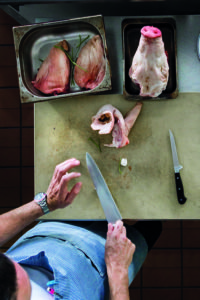 Butchers Are Your Buddies

At St. John, they have a zero waste policy, says Edwards, even down to how the menu evolves. Start at the front and finish at the tail. As for cooking your own meat? “Generally, supermarket meat is not great, no matter how many days it has been aged for. I would strongly encourage people to find a local butcher and speak to them. They can always help you in your culinary mission.” Every time you turn your nose up at offal yet happily bite into a sausage (from Vienna to boerie) you’re probably being a hypocrite – as everything from ears to arseholes goes into the making of most sausages.

Want to see more? Try out these pork recipes!