How to Love Healthy Foods You Hate

Pickled Herring. Kimchi. Brussel sprouts. Some of the foulest edibles are the best for you

Name a food you hate. Brussels sprouts? Pickled herring, kimchi, fish sauce, blue cheese? For me, it’s natto, a Japanese fermented soybean dish with all the charm of snot-covered peas. Words like “sweaty feet,” “vomit,” and “unwashed genitals” have been employed to describe it.

But evidence is mounting that natto, like many foods with intense flavours, bubbles over with nutritional magic. In 2015, an intrepid biologist named Toshirou Nagai published a review of natto’s health benefits, including immune system resilience. Other research has shown that it may strengthen your bones and reduce your risk of stroke. Meanwhile, brussels sprouts are packed with disease-fighting compounds. Pickled herring harbours heart-healthy omega-3 fatty acids. Kimchi, like many other fermented foods, promotes beneficial gut bacteria.

So the obvious: Why are some healthy foods so repulsive? And is it possible to learn to like them? 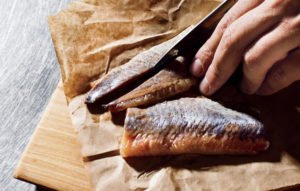 WHY YOU HATE WHAT YOUR BODY LOVES
Mother Nature has a warped sense of humour. Many bitter-tasting compounds that in large quantities could sicken or kill you are very good for you in tiny amounts, says Paul Breslin, Ph.D., a professor of nutritional sciences at Rutgers University.

Take isothiocyanates, the chemical weapons plants use to ward off pests and hungry animals. These compounds are found in bitter vegetables. If you swallow trace amounts from, say, a cabbage leaf, they can counteract DNA-damaging free radicals. It’s the dose that makes the poison. Your tongue’s taste receptors for bitterness are far more numerous and sensitive than those for other tastes. Scientists think this is because the human tongue has evolved into a poison detector.

Bacteria, like those found in blue cheese and natto, offend us for a different reason: odour. Strong foods like kimchi and sauerkraut undergo fermentation—essentially a controlled decay. Our nasal passages have evolved alarm bells for stink as a way to detect living bacteria, says Breslin. As with toxins, bacteria can be dangerous or even lethal. But some should be accepted.

“Since we don’t live in a sterile universe,” Breslin says, “it’s good to have friendly bacteria to fight off the unfriendly ones.”

In the past 15 years or so, modern science has begun to recognize the benefits of good gut bacteria. The term “probiotics” is common now, and it’s become clear that a diverse “microbiome” of bacteria in your intestinal tract plays an integral role in maintaining good health. A 2014 review concluded that probiotics in your gut help fight off pathogens, refresh intestinal cells, and generate healthy fatty acids. A few strains of food-borne gut bugs have also been shown to help boost immunity, calm inflammation, and help you maintain a healthy body weight.

Ultimately, our flavour choices come down to a risk-reward calculation. Despite the risk of death, we actually come out ahead if we’re open to certain quantities of bitterness and certain types of stench. Some foods—including kimchi and my nemesis, natto—are memorable culinary symphonies of both bitterness and stink, and that’s what makes them especially potent.

“Why don’t people want to eat food that smells like old gym socks?” Breslin asks. “I think that has to do with what you’re exposed to.” Perhaps my problem with natto wasn’t natto. Maybe the problem was me. 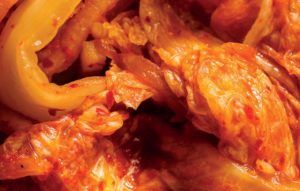 HOW TO LOVE FOODS YOU HATE
While some of your taste preferences may be genetically inherited or formed in utero (if Mom loves kimchi, baby is more likely to love kimchi), you can still acquire a taste for a new food as an adult.

“Baby steps,” says Emma Beckett, Ph.D., a postdoctoral researcher at the University of Newcastle School of Medicine and Public Health in Australia. “You can’t go straight from a Big Mac diet to cruciferous vegetables. But it’s not impossible for anyone to learn to like a particular taste.”

At the German Institute of Human Nutrition, researchers investigate the ways repulsed adults can acclimate to strong flavours. A professor at the institute, Wolfgang Meyerhof, walked me through the cultural, psychological, and biological variables that can sway you. As we move through life, “flavours are paired with ‘post-ingestive experiences,'” Meyerhof says.

Bad experiences (vomiting, punishment by parents, horrible dates) can ruin a taste or smell. Good ones (not vomiting, encouragement by peers, amazing dates) can help us develop a fondness for foods we once found too bitter or stinky. The key to success is to separate “hedonic assessment” from the “qualitative description of what is in your mouth,” Meyerhof says. Set aside that impulse to love or hate. Instead, like a scientist, try to acknowledge what the flavour is.

For help with my own post-ingestive experiences, I sought out chef Richard McCormick. Raised by missionary parents, McCormick grew up devouring the food of Thailand, the Philippines, Japan, and Korea. Now he runs an empire of Helsinki eateries.

I threw down the gauntlet by sending McCormick a list of bitter, stinky, healthy ingredients. His mission, through culinary wizardry, was to make me like everything on the list. First he made me a Caesar salad of lettuce, kale, and quinoa tossed with dressing. Instead of anchovies, he snuck in a tablespoon of finely chopped pickled herring. It was incredible. Even Swedes and Finns, McCormick pointed out, mix their big pieces of pickled herring with sauces and other side dishes to balance the intensity of the stink.

I later watched McCormick scatter a handful of kimchi across a hot skillet, sauté it for 30 seconds, and pour in a frothy bowl of beaten eggs. He then topped it with thin slices of avocado. The creaminess of the eggs cut the pungency of the kimchi, yet didn’t negate it.

I also devoured crostini that McCormick concocted. He mashed raspberries in a bowl and mixed in salt, pepper, and a few drops of white wine vinegar. Then he layered slices of fig and blue cheese onto pieces of toast. After drizzling the crostini with the raspberry sauce, he sprinkled them with a tablespoon of chopped mustard greens. The sweetness evened out the bite.

After a few more dishes, we opened the natto. Trying to pull beans from the mass resulted in thin, mucus-like strings. McCormick wrangled the strings with a spoon, popped a few beans into his mouth, and chewed. “This one’s got to be the healthiest.” He sighed and prepared his final recipe.

I had to hand it to him. The dish McCormick had devised was natto refried beans. He fried onion and garlic in butter with chili powder, cumin, and cinnamon, then turned off the heat and folded in the natto before adding manchego cheese. I ate it, and I didn’t hate it.

I also didn’t love it, yet that seemed okay. Perhaps with food—as in life—if we’re going to be strong, the sweet and the savoury have to be balanced by the bitter and the pungent. 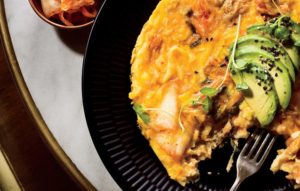 How to Make It:

1. In a medium bowl, whisk the eggs with a splash of water and a little salt and pepper.

2. In a large pan on medium heat, add the butter and oil. Heat the kimchi for 30 seconds. Add the eggs and cook until firm, 2 to 4 minutes. Using a spatula, flip the entire disk. Cook until set, about 1 minute. Plate and top with avocado, sesame seeds, and watercress. 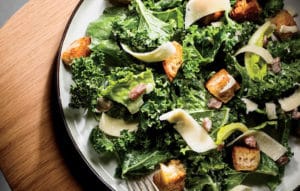 How to Make It:

1. In a small bowl, mix together the mayonnaise, herring, garlic, lemon juice, mustard, Worcestershire sauce, and 2 tablespoons of the Parmesan. Season the dressing with salt and pepper.

2. In a large bowl, add the romaine, kale, and dressing; toss. Top with the croutons and remaining Parmesan.