Should you give in to your sweet tooth more often?

You know those people who claim to not really like dessert, or who say they prefer salty flavours to sweet ones? I’m not one of them.

Dessert has always been a big thing for me. I’m generally a pretty clean eater who will happily order the side salad over the fries and have a smoothie or veggie scramble for breakfast. (Most of the time, anyway.) But put me face to face with a fudgy brownie or a scoop of buttery fruit crumble with ice cream, and I’ll never be able to say no—even when I’m already full.

For years, I was convinced that I just couldn’t let myself enjoy treats whenever I felt like it, because I would inevitably spiral out of control and gain 50 kilograms. So I managed my cravings by giving myself permission to have dessert once or twice a week. This never really worked, though. Since I knew my opportunities to indulge were limited, I’d almost always end up eating to the point of feeling uncomfortably stuffed—not to mention, guilty.

Then, about a year ago, all of this changed. My husband and I decided to travel for several months, which shook up my routine. In the past, dessert was almost always homemade, and we’d usually eat it on Friday nights while we vegged out in front of the TV. But suddenly, I didn’t have the time (or the kitchen space) to bake homemade treats anymore. Plus, Friday nights usually involved something more interesting than sugar and screen time—like hanging out with new friends, exploring unfamiliar neighbourhoods, and, yes, trying local foods.

Though I didn’t want to overdo it, I knew it would be silly to pass up an incredible treat I wouldn’t find at home (honeycomb ice cream, anyone?) just because I already had dessert that week. Before long, my old rigid habits had fallen away, and I found myself indulging whenever I wanted—which was pretty much every day. It’s something I’ve continued to do since we returned home five months ago, and it’s so much better than my old approach.

Here’s how giving into my sweet tooth influenced my health and my day-to-day routine. Plus, a few reasons you might want to consider loosening the reins a bit, too. 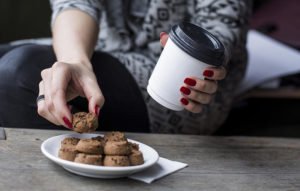 I BECAME SATISFIED WITH SMALLER PORTIONS.
To my total surprise, giving myself the freedom to indulge didn’t turn me into a bottomless pit for doughnuts and ice cream. I still find myself craving something sweet most days. But nine times out of 10, a chocolate peanut butter cup or a small cookie is enough to hit the spot.

And when I do have something a bit more indulgent, I eat until I’m satisfied, not stuffed. Sometimes, I’ll still polish off every last crumb or wipe the last bit of frosting off the plate with my finger, but I also have no problem not finishing something if I’m full. Even if something tastes incredible, I now know that shovelling in another bite is rarely worth the bellyache that inevitably follows. 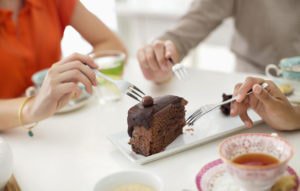 I STOPPED FEELING GUILTY ABOUT EATING CAKE.
Whether I find myself at a café with friends, a big family meal, or a restaurant with my husband, opportunities to indulge come up all the time. In the past, I’d usually skip dessert on these occasions and end up feeling deprived. Or if I did say yes, I’d overdo it and feel guilty, which would drive me to eat even more junk.

Those kinds of things just don’t happen anymore. Now that I allow myself to have dessert whenever I want, I don’t feel compelled to scarf down sugary stuff that I don’t really want just because it’s there. And a few times a month, when I get a hankering for something indulgent, like an ice cream sundae or a really delicious pastry, I’ll have it, enjoy it, and move on. 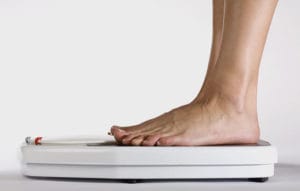 I HAD TO BUY NEW PANTS.
You’d probably expect me to say that after a few weeks of daily dessert, my pants started to feel uncomfortably tight. Instead, I lost about 3 kgs in the last year, without altering any other aspect of my diet. My weight has always been in the healthy range (and still is), but these days my body feels lighter and my stomach feels flatter.

By giving myself permission to eat dessert whenever the mood strikes instead of bingeing once or twice a week, I’m actually eating less dessert overall. 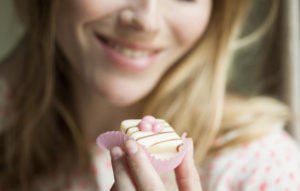 I STOPPED THE CYCLE OF SELF-LOATHING.
I used to eat huge portions of dessert to feel like I got what I “deserved” for the week, which would leave me feeling guilty and out of control; like there was something wrong with me because I wasn’t capable of enjoying a moderate helping like a “normal” person.

These days, that stuff just doesn’t factor in. I enjoy every bite without a side of self-loathing. And when I’m finished eating, I no longer think how I wish I had more or how I’m gross for eating so much. Instead, I think, wow, that was so good.