Why You Should Fire Up A Steak Tonight

Some Alarmists would like you to believe that eating beef will kill you. But we’ve got the truth behind the hyperbole. Read it. Digest it. Fire up a steak.

Heart disease! Cancer! Stroke! Diabetes! Brutal murder by cow! If you’ve read any news about beef and health in the past year, you might think some super PAC had staged a political takedown of cattle farmers. But a closer look at the research reveals that the evils of beef are a load of bull. Red meat can be a nutrient-rich addition to an otherwise healthy diet, says Dariush Mozaffarian, chair of nutrition at Tufts University. It’s true that processed and cured meats (like deli meats and salami sticks) can raise your risk of stroke and heart disease, he says. But unprocessed red meat – steaks, chops, and other whole cuts – isn’t a health villain if you eat it in moderation. Even fatty cuts of beef aren’t inherently bad for you. “When I started researching fat and saturated fat 15 years ago, I thought I’d find all these harms,” Dr Mozaffarian says. “But the more research I’ve done, the more total saturated fat seems neutral – neither good nor bad for your heart.”

What about the links between red meat and cancer? Again, the most damning evidence points to processed meats, says Harvard oncologist Jonathan Schoenfeld. Plus, unprocessed red meat delivers zinc, selenium, iron, B vitamins and some fatty acids. Bring on the beef.

How Much Red Meat Is Too Much?

“Avoid processed or cured meats as much as possible. Think of them as something you could have once or twice a month at most. As for unprocessed red meat, evidence suggests that you can have two or three servings a week. A serving is 100 to 180 grams.” – Dariush Mozaffarian, School of Nutrition Science and Policy at Tufts University.

The Best of Red Meat

Any dedicated hunter will tell you that the best red meat isn’t beef or lamb. It’s venison, which has all the heartiness of the former with far less gaminess than the latter. Don’t hunt? Head to The Venison Company (CPT, thevenisoncompany.co.za), Kings Meat (PTA, kingsmeatdeli.co.za) or even Woolworths (R180/kg) for tenderloin, and cut into medallions. Grab a lightly oiled cast-iron pan and set it on the stovetop over high heat. Season the medallions on both sides with salt and pepper and add them to the pan. Flash-sear the venison on each side until medium rare, 2 to 3 minutes. Serve the meat with sautéed mushrooms and a sturdy red wine. 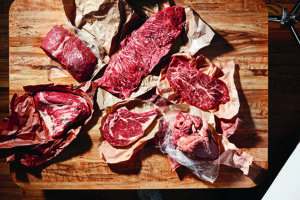 The Dirt on Grass Fed
Know these answers before you make the switch from the usual grain-finished fare.

What does “grass fed” actually mean?
First off, for the majority of their lives, most cattle are grass fed. But then some farmers ship the animals to feedlots where they’re fattened on grain. (The heavier the cow, the more cash it brings in.) Ranchers can choose to skip this step and stick with grass. So “grass fed” really means “grass finished.” It’s a nuance, yes, but it’s important.

Is there a label
I should look for? South Africa’s food labelling regulations are a minefield for farmers and consumers alike. (Read more about that at farmerangus.co.za, or give the Directorate of Food Control a call on 012 395 8800.) Already at the butcher’s? Ask the man: fed or finished?

Try out these must-try cuts or make your own steak sauce.