Are they the reason you’re ready to pop your belt?

If your gut suddenly feels puffy to the point where your pants become uncomfortably tight, you’ve experienced the misery of bloating. Bloating’s not just a problem for women: Guys can bloat, too. For men, the problem often has to do with something that you eat or drink, says Orange Coast Memorial Medical Center gastroenterologist Ashkan Farhadi, M.D. (Whereas with women, bloating is often related to hormonal changes.) The same foods or drinks don’t affect everyone in the same way, but there are some common culprits that are notorious for making you look like you’ve gained a gut a big, fat gut in no time. Here are 7 to keep in mind. 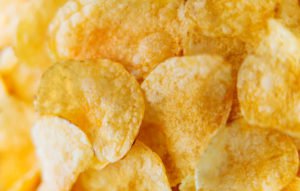 INSTANT GUT-GROWER: SALTY FOODS
Potato chips, soy sauce, and other salty foods are loaded with sodium. “Sodium helps regulate the levels of water in your body, and so the amount of sodium you eat partially determines whether your body retains or excretes excess water,” explains registered dietician Alissa Rumsey, R.D., C.D.N., C.S.C.S., founder of Alissa Rumsey Nutrition & Wellness. If you eat more sodium than you need, your kidneys respond by holding onto extra water to keep the sodium concentration in your blood normal. And holding on to that extra water makes you feel bloated. And all that extra liquid can cause your stomach to puff out. You might notice puffiness in your fingers or face, too. You don’t have to cut out salt altogether, just try not to overdo it. Stick to the serving size for salty snacks like chips or popcorn, and use low-sodium soy sauce instead of regular, Rumsey says.Drink more water, too: It sounds counterintuitive, but guzzling more H20 will signal to your body that it’s okay to release some of the water it’s holding on to. 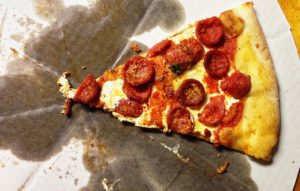 INSTANT GUT-GROWER: GREASY TAKEOUT
For starters, things like fried rice, pizza, or nachos are high in sodium. But they also tend to be loaded with refined carbs and sugar—two other things that cause bloating and puffiness. “Carbohydrates are stored as the sugar glycogen in the body, and glycogen binds with water,” Rumsey says. So the more carbs you eat, the more glycogen you end up storing—and the more water molecules that stick around, too. Takeout tends to be fatty too, which can make bloating worse. Rich, high-fat foods take longer to digest than leaner ones, says Dr. Farhadi. So that gigantic burrito will literally give you a food baby for longer than a salad or chicken breast would, since it’s staying in your stomach longer without moving along. 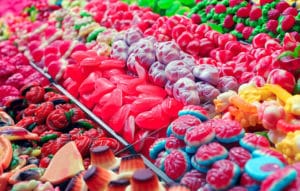 INSTANT GUT-GROWER: SUGAR-FREE FOODS
Sugar alcohols like xylitol and sorbitol—which are commonly found in sugar-free baked goods, candy, or gum—contain compounds that your body can’t digest. As a result, the compounds sit in your gut, where bacteria feed on them. “That creates an abundance of gas and other chemicals, which results in bloating or changes in bowel habits,” Dr. Farhadi explains. Sugar alcohols don’t cause bloating in everyone, so you might not need to avoid them completely. But if you notice that your stomach puffs out after you eat them, you might want to steer clear, says Dr. Farhadi. 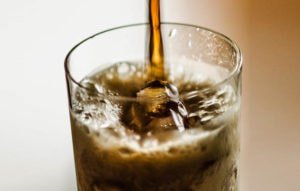 INSTANT GUT-GROWER: CARBONATED DRINKS
When you drink soda or seltzer, the gas from the bubbles gets trapped in your stomach—which can make you feel uncomfortably full and bloated, Rumsey says. Sugary soda is even worse, since it’s high in refined carbs that cause your body to retain extra water. (Unlike sugar alcohols, the artificial sweeteners used in most diet sodas don’t cause water retention. But the bubbles can still make you bloated.) How you drink the fizzy stuff can also have an impact. “Sipping through a straw can cause you to swallow air, making gas and bloating worse,” Rumsey says. So when you have something bubbly, you might want to drink it straight from the bottle, can, or glass. 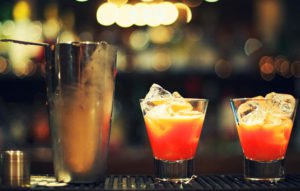 INSTANT GUT-GROWER: BOOZE
Alcohol is high in carbs, and it’s also a diuretic—meaning it makes you dehydrated. That combo can signal your body to hold on to as much water as possible, which can cause puffiness and bloating, Rumsey says. But that’s not all. Alcohol also slows down your stomach’s digestion speed. So any food you ate with your drink will stay in your belly longer, making it more likely to stick out. That’s why it’s a good idea to stick to 2 drinks max, Rumsey says. And for every drink, down a glass of water. That will help prevent bloating and puffiness caused by dehydration. 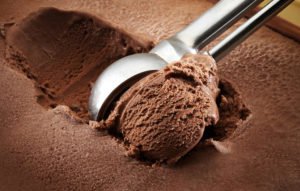 INSTANT GUT-GROWER: DAIRY FOODS
Dairy doesn’t make everyone bloated. But if you’re lactose intolerant, things like milk or ice cream can leave you gassy and uncomfortable. (Some people can still tolerate yogurt and some cheeses, which contain less lactose.) And it’s more common than you think: Around 65 percent of people have some difficulty digesting lactose, according to the National Institutes of Health. Lactose intolerance happens when your body doesn’t make enough lactase, the enzyme needed to digest the sugars found in dairy foods, Dr. Farhadi says. When those sugars aren’t digested, bacteria feed on them, causing gas and bloating. If you think you might be lactose intolerant, talk with your doctor. Together, you can figure out how much dairy you’re able to tolerate without discomfort, as well as how to make sure you’re still getting enough calcium. He might also recommend over-the-counter lactase tablets or drops, which can make dairy products easier to digest. 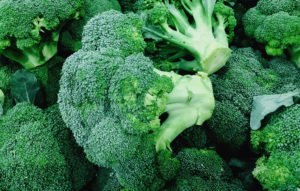 INSTANT GUT-GROWER: BEANS AND CRUCIFEROUS VEGETABLES
Foods like lentils, chickpeas, and broccoli contain sugars called oligosaccharides that some people have trouble digesting. “When they reach the colon, they can be fermented by bacteria, which produce gas and bloating,” Dr. Farhadi says. Still, beans and cruciferous vegetables are some of the healthiest foods out there. Instead of avoiding them completely, give your body time to adapt. In one study in the Nutrition Journal, 35 percent of participants reported gassiness when they started eating a half cup of beans daily. But eight weeks later, only 3 percent still reported feeling gassy.

BOTTOM LINE ON BLOATING
Most of the time, bloating has to do with something you ate. But if you’ve made changes to your diet and are still experiencing discomfort, or your bloating keeps coming back after several weeks, talk with your doctor. They may consider testing you for a digestive disorder like irritable bowel syndrome or Crohn’s disease.