3 Ways To Boost The Flavour Of Tomatoes

A great tomato should drip with juice, burst with sweet- tart flavour and shame the supermarket specimens sold during the cold months.

“Winter tomatoes are often picked green and may be ripened  artificially with ethylene gas,” says Barry Estabrook, author of Tomatoland (R177, Kalahari). That makes a difference – a Spanish study found that  vine-ripened tomatoes are higher in lycopene, vitamin C and total phenols and flavonoids than tomatoes that were picked green.

And those compounds can have a wide range of benefits. In a study from Finland, men who consumed high amounts of lycopene had a significantly lower risk of stroke. In Japan, researchers found that a compound in tomatoes can help break down lipids in the bloodstream, reducing the risk of vascular diseases. And frequent tomato consumption may even improve prostate health, according to a meta-analysis of studies from Royal Victoria Hospital and McGill University.

To boost the flavour and nutritional power of tomatoes even further, take your cue from Andrew Feinberg, chef and co-author of the cookbook Franny’s: Simple Seasonal Italian (R387, Kalahari).

LESSON 1: Pick the Best
If your supermarket offers a choice of varieties, keep an eye out for new shapes and sizes: there are stacks of different kinds available: from Israeli to Vine, Roma to Rosa. To make those raw tomatoes even tastier, try a simple marinade. “The salt not only seasons the tomatoes but helps release some  of their moisture, resulting in a firmer texture,” Feinberg says.

LESSON 2: Pair with Olive Oil
A quick trip to the sauté pan blunts the acidity of tomatoes, allowing  their sweetness to fully come through.  And your body benefits: an Australian study found that cooking tomatoes with olive oil can dramatically increase the bioavailability of the fruit’s lycopene. (Your body can absorb more of it.) They need only  a few minutes of cooking: “Summer tomatoes are so ripe that they hit  the pan and immediately begin  melting into a sauce,” says Feinberg. An avowed pasta freak, Feinberg  recognises that a recipe like this one seems almost too simple to be special, but the proof is in the eating. “It’s fantastic to make at the height of tomato season. A perfect dish,” he says.

LESSON 3: Slow-roast to Tenderness
There’s no better reason to turn on your oven in summer. “Roasting is  a great way to coax deep, earthy  flavour out of tomatoes,” Feinberg says. “In essence, you’re almost dehydrating them, evaporating some of their water so the sweetness intensifies.” The tomatoes will burst but retain some of their juice, leaving you with what Feinberg calls “little flavour bombs”. The nutritional profile is impressive: an Italian study found that cooking cherry tomatoes increased the bioavailability of their naringenin and chlorogenic acid, two potent antioxidants. Pile this roasted-tomato mixture on crostini, or cover it with olive oil and keep it in the fridge to toss into pasta, omelettes or sandwiches.

KICK IN THE CAN
Summer tomatoes may be around for only a few months, but don’t despair: canned and dried versions are available all year long and can be even more nutritionally potent. Here’s how six tomato products compare per cup. 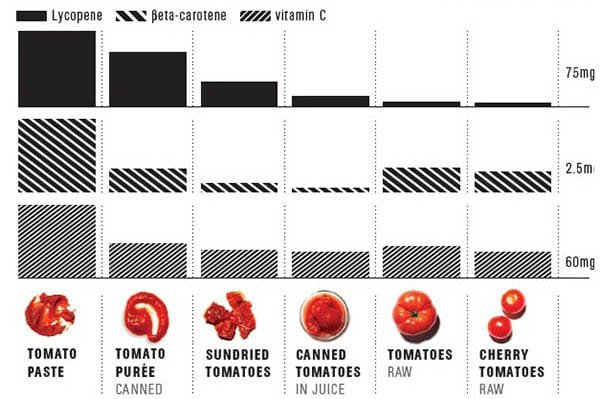