Zero to Hero Week 9: How Failure is Inevitable And How It Will Work To Your Advantage

It felt like a trash compactor was descending towards me and my arms had turned into noodles (and not the good kind, those 2-minute ones you nuke in your microwave when you’ve given up on life). In the space of three weeks, the bench press had gone from an exercise I relished to one that was killing me inside and out. David Cross, my strength coach, or tireless charity worker – pick one – sighed as he lifted the bar from my grip.

“I’m warning you, I’ll strip the bar if you don’t figure this out, you’re going to hurt yourself,” he said.

And he was right. My technique had disappeared, and for three weeks I was pressing with all the efficiency of a man trying to make orange juice after a hit of DMT. I was letting the bar dip forward, backward, every-ward except upward. For those three weeks I had hit a plateau of a humble, and slightly embarrassing 35kg. The result? I was obsessed with showing up and breaking down a wall that would even impress Trump’s biggest fans.

I rejigged my meals, watched videos until my only Youtube recommendations consisted of Hulk-like gym bro-barians and bench press “TRAP 420” music mixes. And I’d show up for the next session, excited, pumped, ready to put my new knowledge to work. And then? DEFEAT – think: the death screen in an old Amiga game.

It’s incredibly demotivating. You beat yourself until you’re sitting there in complete silence just contemplating life and the words “next set” sound like a call from the gallows. 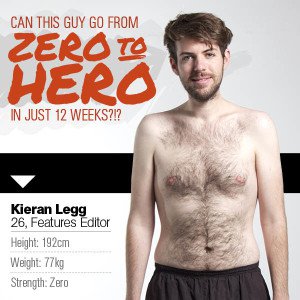 Here’s a lesson: there’s no shame in hitting a plateau. In fact, “defeat” is inevitable. If you aren’t hitting a wall, then you aren’t pushing yourself hard enough – well, in my humble and not entirely informed opinion. The problem is: I have just 12 weeks to muscle up and take this as far as I can. And losing a week? That feels awful. Losing three? I’ve squandered a quarter of my time just sitting at the same weight like a guy waiting for a train at a bus station.

But, in hindsight it wasn’t squandered time. You learn a few tough mental lessons, and you also begin to hone in what’s going wrong. Those weeks spent messing with meal plans and practicing technique with nothing but bar and sapped brawn taught me the value of hard work.  I wasn’t just showing up at sessions, I was showing up with a plan. I had goals, I had an immediate vision and when I finally conquered that hurdle, not just pushing 35kg of bar and plates, but smashing my previous attempts to the point that those three weeks never happened- there’s no word for that feeling.

“Were you taking the piss for three weeks?” Cross asked me. “For three weeks you mucked about in there, and now you come in here and do it like it’s nothing.”

I don’t know what changed. Whether it was a mental barricade, or I’d hit the right notes with my meals (I did cut out the aforementioned 2-minute noodles). In hindsight, I hadn’t changed much, I just knew that I wouldn’t be able to rest easy until I’d figured out what I was doing wrong, and just that was maybe enough.

I don’t take things for granted when I walk in there. Even if I’m lifting the same weight, I know I have to focus, I know I have to bring it my all because a) David Cross can quickly live up to his namesake b) He’s really good at throwing Kettlebells that are almost always heavier than me c) I don’t want to feel disappointed when I leave the gym, I want to feel like a badass d) Did I mention that whole thing with the Kettlebells?

In a time where countries are building giant walls for the first time since David Hasselhoff had to travel to Germany to bring them down, demolishing your own walls feels pretty good. And the best part? You don’t need Hasselhoff to do it.