Zero to Hero Week 4: 3 Lessons This Guy Learnt While Working Out For The First Time

Our Features Editor Kieran Legg is taking on his biggest challenge – taking his twiggy frame to titanic status. Want to play catch-up: here’s how week 1, week 2, and week 3 went.

Some things have learning curves, others have gradients. However, my journey has been more like climbing a vertical wall carved out of smoothly polished marble. My goal is simple: go from zero to hero, from not being able to lift a barbell to racking it up all the way up to my bodyweight in the three main lifts: dead, squat, and bench press. The dream? Breaking triple digits. (And I’m doing it Vegan)

My mentor – top strength coach David Cross – has taken me under his wing, hoping to transform me from a wriggling fish out of water to something vaguely resembling a functional adult. While I haven’t matured, my technique and work capacity have advanced at a quick and motivating pace. “Those noob gains, it’s fast,” Cross, arms folded, tells me as I attempt to recollect myself ahead of another high-rep set of squats.

He’s taught me a lot, in fact, it’s impossible for me to list the veritable encyclopedia of knowledge Cross is drilling into my head one rep, one kettlebell, one British-accented command at a time. But here are my takeaways (and not the greasy kind I reward myself with after a week of training) after 4 weeks flinging myself at steel and iron.

I don’t like Thursdays. I know, you’ll say: “Thursday means we’re one step closer to Friday, what’s wrong with Thursdays?” As Cross puts it: “It’s your toughest day”. The focus is on legs and core, and the combination of Bulgarian Split Squats, heavy carries, and deadlifting 5kgs more than the week before – it’s brutal.

But the point is, that as tempting as it is to cancel those plans, breaking through that wall of pain is worth it. No matter how it goes, it’s a confidence boost that I ride the entire weekend. The endorphin rush of really testing your body, and pushing to the point where you expect it to snap, and then still be able to get out of bed the next morning: damn it feels good.

Don’t give into that voice telling you to take the easy way out. Every minute you spend suffering in the gym is worth an hour of feeling like a badass later. You’re making an investment, not just in the present, but in the future. You’ll be stronger, but most importantly, you’ll be happier. Cross kindly shot a video of my deadlift dealings (the bar is racked with 65kg, no small feat for a guy who 5 weeks ago couldn’t even lift a well-fed hamster).

Not to go full bro here (although bro-isms are starting to creep into my everyday conversations), but did I mention playing it fast and loose with your protein intake is a quick way to tank your progress. Even in my fortunate, but boney, position – where I have the perk of eating at maintenance while still packing on muscle mass – hitting those recommended daily intakes is mandatory.

As Cross told me on my first day, where my attempt at a deadlift was more likely to put me in the hospital than bring a bar any closer to my face: “80% of how you look is down to what you eat, the rest of it is what you do here.”

As a vegan, before I tackled this challenge I was lucky if I even hit 10% of that TDE. It wasn’t because of the food available to me, but it’s just much easier (and often tastier. Exhibit A: pasta) to go carb-heavy. Making the switch did wonders for my strength – when you set the focus of your meals to stacking up the protein, everything else just falls into place. 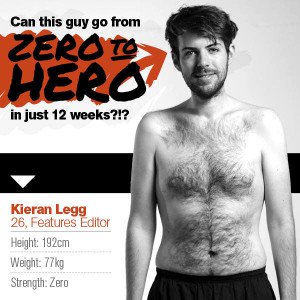 You would think that building raw strength in just 12 weeks would mean I’m up at 6am and “pumping iron”. But here’s the good news, especially for guys like me who treat Saturday mornings as an optional time to be awake. Maximum: I’ll be working out 4 times. That’s just four hours.

When Cross told me that was the magic number, I was surprised. Me, the self-described, and most readily and officially annointed, living and breathing example of zero strength, can get away with taking it easy three days a week?

“When you rest, it gives your muscles time to recover, to grow, and that’s where you start building the real strength,” he says.

It’s pretty damn inspiring when you hit Friday and realise you’re still putting in body time even when your couch is seeing more of your ass than it is during the rest of the week.

HERE IS THIS WEEK’S WORKOUT