I ran the Don Lock on Sunday. It’s a 15km race that starts in Claremont and loops around Rondebosch Common, so there’s a guaranteed view of the mountain almost the whole way. It’s organised by the Celtic Harriers, one of the five oldest running clubs in Cape Town, and it’s been going since the 60s. This was its 57th year, and it hurt like hell.

Somewhere around halfway my left knee spasmed and I screamed a little, hopped sideways into someone else. She said, Achilles? I said, no, IBS. Wait, I mean ITB.

Most mornings now, I’m out of bed by 5am. Sunrise, to put this in perspective, is at a quarter to eight. So it’s dark, and usually hovering under 10 degrees, and it can get pretty wet too. A few days ago I ran for an hour through nothing but fog; cars coming out of nowhere, my arms shivering, my nose dripping like a tap. Days like that can make you wonder if you’d be better off in bed.

And then there are races. The Don Lock is not an overly popular race, so from the gun you’re moving almost immediately; it’s not the most challenging route, in that there are no major inclines and the track couldn’t be any flatter; and it’s not the most scenic area either, by Cape Town’s standards. So you have to concentrate – on your body, and how it feels, on your lungs, and how they sound, and on your feet, and where you put them.

What is ITB, anyway? Iliotibial band syndrome, according to the guys in the Runner’s World offices next door, is when the ligament that runs down the outside of the thigh from the hip to the shin is tight or inflamed, and this happens, they tell me, when you run like an idiot. Some of the best ways to get stabbing pains in your knee include all the things I do wrong: running on the camber too often, not changing direction enough, changing up your shoes too often, or not often enough, and not warming up properly. But the absolute best way to get ITB: do a lot of running.

Most mornings now, I’m on the road before I’m all the way awake. When I get home, I walk past my neighbours’ window and I can hear their alarm clock going nuts. My body, to make things worse, is something of a complainer: if my joints are cold or my back is stiff, they’ll tell me all about it. A few days ago I ran for an hour with pain and pins and needles in my shoulder the whole way; by the end I could hardly feel my arm. Runs like that can make you wonder what you’re doing on this road, and why.

I ran the Dock Lock on Sunday and it made me feel, for probably the first time, like a runner. Chris wanted me to finish in 80 mins, but in the week leading up to the race I was hoping to go quicker than that, maybe 70 or 75. As I hit the finish on 80 on the button I realised he probably knows something I don’t, about what I’m capable of and where I am, right now, in getting there. He probably knows, better than me, the value of a long, flat, boring run, and the importance of learning to listen to my body. And he probably knows a lot more than me about why I’m doing any of this in the first place.

Last week I was bitching about my knee playing up and he laughed and said, yeah, you’re not a runner until you have ITB. What he meant was, stop running like an idiot. What I heard was, you’re a runner now. Before this challenge I wanted to get stronger, better, faster. Three weeks in I’m already a little of all of them. 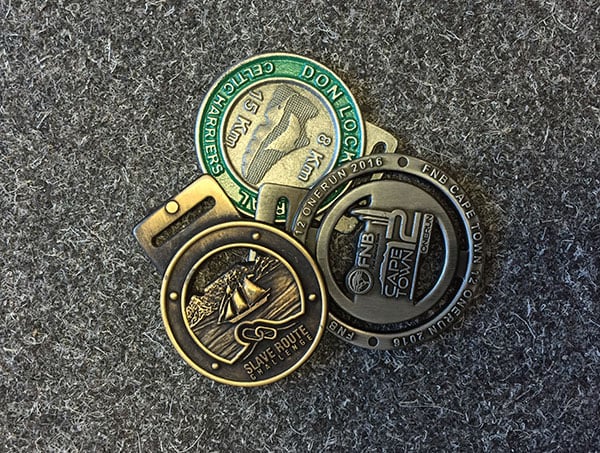