To lose weight, you need to make some big changes. Your family might just be the inspiration you need. Here's how to raise a fitter family.

Keeping up with your kids can be tough. Just ask Christian Bizzotto. He’s the proud father of Milla Star Bizzotto, the youngest competitor in the 24-hour BattleFrog Extreme, a gruelling obstacle race designed by US Navy SEALs. Bizzotto, 38, is right there next to his mud-covered daughter as they cross the finish line together. And this isn’t the kiddie race: 10-year-old Milla runs with the adults – and beats most of them, too.

Related: Does Your Dad Need A Health Intervention?

Just eight years ago, Bizzotto wouldn’t have dreamed of taking on such a challenge. When Milla was a baby, a motorcycle accident left him with a broken back, a herniated disc, a broken foot and hand, and – once he could move again – a broken heart. His wife left him as soon as he recovered.

“I was broken in every sense of the word,” says Bizzotto. He knew he had to make a change. “I had this little kid who looked up at me every day like I was a superhero. But to myself I was a super nothing,” he says. “I wasn’t any of the things she probably saw when she looked up at her dad.”

His fitness journey began simply: by running between two dustbins at the beach. First they were 15 metres apart, then 30 metres, then 150, then 1 500. Eventually he was doing 20-kilometre trail runs “for fun”. Now 45 kilograms lighter, Bizzotto co-owns Focused Movement Academy, a training facility in Miami. Milla’s ambitions keep him going.

Hitting the gym with a friend can double the duration of your workout, according to research from Michigan State University. For the Bizzotto family, it’s more like quadruple.

“Practising what you preach is everything,” says Sean Garner, a trainer and father of two. You can’t tell your kids to eat healthily and then let them see you choke down pizza and beer every weekend.

Related: ​These 8 Fit Dads On Instagram Will Motivate You to Step Up Your Game

“They’re watching you, whether you realise it or not,” he says.

Who needs free weights when a kid’s in the house? Trainer Sean Garner has a few ideas. 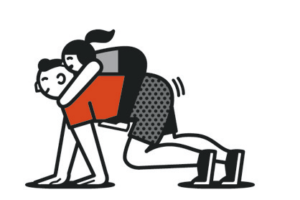 Do It: Get on all fours, and tell your child to hop onto your back. Lift your knees slightly; crawl forward and back. 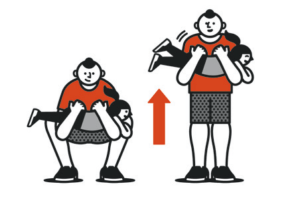 Do It: Hold your kid parallel to the floor with your hands under his or her hips and shoulders. Squat.

Related: How to Perfect the Pistol Squat 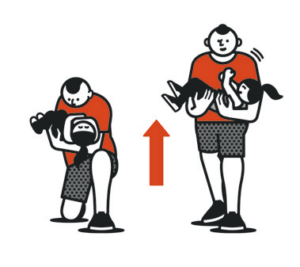 Do It: Still holding the child, stand and lunge backward with one foot, twisting your torso. Switch feet. 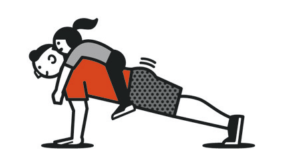 Do It: Assume a push-up position and get the child to lie flat on your back, arms hanging, during your reps. 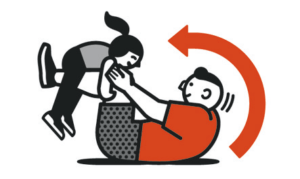 Do It: Lie face-up on the floor with your child’s torso on your shins. Bring your legs and torso together.